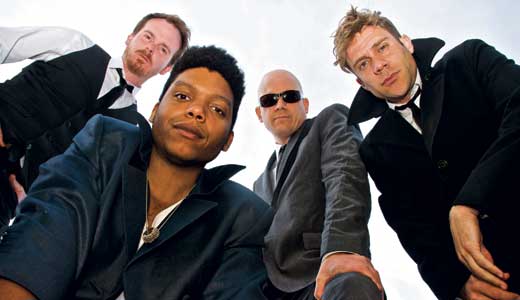 JC Brooks & the Uptown Sound are rising stars of the soul-rock revival movement that has also seen Alabama Shakes, Sharon Jones & the Dap-Kings, and Fitz and the Tantrums find a home on NPR stations across the nation. So it’s fitting they return to Louisville, only four months since appearing as openers at Headliners, to headline this year’s inaugural “Waterfront Wednesday,” public radio station WFPK’s summer concert series.

The band visited here in January for what Brooks called “a really great show” opening for JJ Grey & Mofro, and the frontman received an unexpected surprise. “I ran into an old friend from college that I didn’t even know was living down there. We had soundchecked and went to this little bar/restaurant near the venue, and she was actually eating there. She said, ‘Holy shit! I’m coming to see your show,’” mimicked Brooks, a theater-trained actor, in a high-pitched voice. “‘You cut your hair!’ You know, I guess you gotta expect people to change a little bit in 10 years.”

The Uptown Sound first became known not only for their dynamic ’60’s-style live show, but also for highlighting previously undetected flavor in Wilco’s “I Am Trying to Break Your Heart,” a cover which earned them a friendly relationship with that other Chicago-based band.

Though Brooks’ spirited vocals and the band’s sharp suits quickly define them as heirs to the Chicago soul throne, Brooks is quick to defer such labels. When asked if they feel more compatible with soul, garage rock or other mid-’60’s sounds, Brooks replied, “Because of the way we’re written up, I think that we’re all forced to identify with the soul scene; the word ‘soul’ dominates a lot of the conversations that we have about the band. But we all identify with a lot of different things — our influences are so varied.

“I don’t want to say that we don’t identify with the Chicago soul scene, but I also think that we’re a lot more than that. We’re trying to push the boundaries of what we do, just so as to not get mired in one genre.”

Brooks continued, “It’s not like we’re trying to write soul music. It’s just that that’s where we started, and we tend to slide into that groove, that pocket, but there’s also a lot of new stuff we’re doing that’s different. Hopefully, people will be pleasantly surprised,” he laughed, “as opposed to appalled when they hear it.”

So, how’s the live show?

“No, no, no, it’s a lot of fun. All we wanna do is make people dance and then have a good time. I like connecting with crowds. I have a lot of fun doing my thing, and part of the fun is — don’t get me wrong, I love when the crowd is into it and comes out ready to dance and party and play — but part of the fun is actually trying to get a crowd that might be a little more reserved engaged. That’s the challenge … that’s where I actually have to work. The rest of it is just fun. I’m living the dream, dude.”

with JC Brooks & the Uptown Sound, Sugar & the Hi-Lows, The Tunesmiths