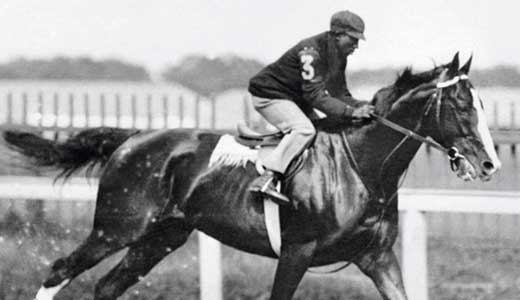 On a walking tour of Churchill Downs, a group of sandaled tourists and curious locals steps out into a brick courtyard. The guide points to a few of the 130-plus green signs lining the track’s signature white rafters. They boast the names of every victorious horse.

Directly in the group’s line of sight is a sign touting 1902 Kentucky Derby winner Alan-a-Dale. Its presence doesn’t stick out, simply another footnote in a storied race. But the year, the horse, the rider all are notable.

In 1902, Jimmy Winkfield, a slight young man, rode Alan-a-Dale to victory in just 2:08. It was the jockey’s second consecutive Derby win, and it also marked the last time an African-American claimed horse racing’s most prestigious win.

Slowly, the sport shunned African-Americans, despite the fact that in the antebellum and post-Civil War South, blacks had played pivotal roles in caring for, training and riding racehorses.

Not surprisingly, the crucible of money and politics pushed that shift.

Inside the Kentucky Derby Museum attached to Churchill Downs, the story of black jockeys, a rarity by the 1920s (only to return in 2000 with jockey Marlon St. Julien), is woven into the larger narrative of history, industry and sport.

Encased in glass, alongside other notable silks, sit the green and orange worn by Oliver Lewis, a 19-year-old African-American and Kentucky native who won the inaugural Kentucky Derby atop Aristides in 1875. Nearby, one can read a short bio of Jimmy Winkfield, or “Wink.”

These days, the Kentucky Derby, and horseracing in general, exhibits much stronger ties to individuals of Caucasian and Hispanic descent. A survey of the Paddock on race day proves that.

But Blaine Hudson, co-author of “Two Centuries of Black Louisville,” says for African-Americans, “the connections are many.” Beyond the two minutes of racing and festivities it inspires, the Kentucky Derby’s place in African-American history reflects Louisville’s brief, annual thrust into the national spotlight. As the city’s premier event, civil rights protestors in the 1960s recognized it as a potential platform for their message of equality.

When looking back, though, a good starting point lies at the starting gates.

An article published by Smithsonian Magazine in 2009 states that many black jockeys were former slaves, responsible for cleaning stables, grooming and training. Out of those responsibilities came skilled jockeys. The article reads:

“For blacks, racing provided a false sense of freedom. They were allowed to travel the racing circuit, and some even managed their owners’ racing operation … When black riders were cheered to the finish line, the only colors that mattered were the colors of their silk jackets, representing their stables …”

Black jockeys earned good wages and raked in money for horse owners, giving them a “privileged status,” Hudson says. He’s heard accounts of Winkfield attending lavish dinners in his honor. Still, there was an understood etiquette embedded in racism.

“The black jockeys and trainers sort of had a place. They were hired hands,” Hudson says. “Now, they could become legends in their own right and, you know, you trot them around and let people … say nice things about them, but they were never viewed as equals.”

The fulcrum that turned African-Americans away from the sport came in 1896 with the Supreme Court’s Plessy v. Ferguson “separate but equal” doctrine. With racism formalized, the injustice of Jim Crow bled into every arena, including sports.

Miles Dean, a longtime equestrian and educator, says while horse owners were mostly interested in finding a jockey who could win, black or white, outside forces, like the KKK, mounted pressure to do away with African-American jockeys.

Simply put, says Dean, there was money to be made. And segregationists wanted that money for whites and whites alone.

“Anytime money becomes an integral factor in the game, then there are those who are going to want a bigger share of the pie and want to control who gets a share of the pie,” Dean says. “That’s how money works.”

Pushed away from agriculture in the South, many blacks moved North to find work. Some jockeys, including Winkfield, found fame and fortune overseas. He moved to Russia in 1904 and raced thoroughbreds owned by Czar Nicholas II. He later moved to France, where he continued to ride. According to the Smithsonian, in 1940 Nazis seized his stables, forcing him to return to the United States, where he got a job with a Works Progress Administration road crew.

While he eventually returned to France, in 1961 he was invited to a pre-Derby banquet at Louisville’s Brown Hotel. Accompanied by his daughter, both were initially denied entry. Eventually, after explaining they were guests of Sports Illustrated, the two were admitted.

Winkfield died in 1974. At the Kentucky Derby Museum, right next to a straight-faced portrait, Winkfield is quoted as saying: “No matter what kind of life you have, you’ll never have a life like mine.”

Around Derby, with so much attention focused on Louisville, there’s a palpable desire to present a spotless city blending urban sophistication with bucolic charms. So during times of great strife, like the civil rights movement, the Kentucky Derby held a strategic use. City leaders listened a little closer to demands.

The first instance happened in 1961 during efforts to not only desegregate public spaces in Louisville, but also ensure white-owned establishments that allowed black customers treated them no differently.

In February of that year, building upon sit-ins and other demonstrations, Louisvillians launched a “Nothing New for Easter” boycott of downtown businesses along Fourth Street. The boycott ended up extending beyond Easter, and soon Derby was on the horizon.

Tracy K’Meyer, author of “Civil Rights in the Gateway to the South,” writes that then-Mayor Bruce Hoblitzell called for a “new plan” for restaurants to desegregate by May 1. The initiative failed, and the black community and its leaders considered Derby weekend demonstrations.

“Basically, I see Derby threats as escalating (the movement),” K’Meyer says. “You know, taking on the local businesses on Fourth Street and making it aimed at a target that’s nationally prominent.”

But concerns rose. Would police be unable to provide adequate protection due to too many Derby-related duties? The Louisville Defender, an African-American- owned newspaper, argued that the movement wanted to create a “beloved community” in Louisville and therefore would show restraint.

In the spring of 1967, African-Americans and white allies staged a series of demonstrations in white Louisville neighborhoods. Swift, violent and angry response in those areas followed.

The Board of Alderman failed to pass an equal housing ordinance in April, and protest marches continued. According to “Two Centuries of Black Louisville,” at a meeting on April 27, 1967, Hulbert James, former executive director of the West End Community Council, announced the city’s inaction would assure “open hell” for the Kentucky Derby.

Specifically, James threatened to disrupt CBS’s broadcast of the event.

“There’s much more anticipation of what’s going to happen,” K’Meyer says, referring to the 1967 protests versus those just a few years before. “The open housing movement was far more controversial in that the opposition to it was more vocal and violent than what you’d seen in 1961.”

The cries of “No Open Housing, No Kentucky Derby” intensified. The Pegasus Parade was cancelled. Five young men ran onto the track during a race just days before the Derby. The mayor requested National Guard troops. (The KKK offered their services.) Fears of violence at the track by drunken segregationists spread.

In the end, the Rev. Martin Luther King Jr. came to Louisville and helped work with leaders to broker a compromise, allowing Derby to proceed. About 140 people marched through downtown on Derby Day without incident. Still, tensions remained high for several months.

It should be noted that Churchill Downs was one of the first public spaces in Louisville to quietly integrate, therefore some black leaders felt targeting the track was misguided.

A third attempt at disrupting Derby during anti-busing demonstrations in the 1970s never materialized. Opponents to busing students for greater school diversity wanted to march around Churchill Downs, but the city denied their permit request.

Blaine Hudson remembers that as a child in the 1950s, Derby Day meant grabbing his neighbor and heading over to 26th and Madison streets, home to the Allen Hotel, the nicest black hotel in Louisville. Up and down the street, the two boys would count out-of-state license plates.

Like every other corner of the city, west Louisville filled with family, friends and visitors on the first Saturday in May.

“Inside Lucky Morris’s Pawn Shop, young men, checks in hand for their day jobs, are getting fitted for Derby week. A light blue single-button suit might be the choice of one young customer who really wants to stand out in the crowd …”

Hudson, as well as oral histories archived at University of Louisville, recollect Derby weekend in that era as being a fluid mix of house parties, bar hopping and ventures to the track.

Much like Mardi Gras, Hudson says, the Kentucky Derby, rooted in tradition and place, developed distinct customs in black and white communities. Of course, with time, boundaries faded. Galas and parties open to anyone with a wallet emerged.

“You want to celebrate in another part of town, there’s nothing to keep you from doing that,” Hudson says. “But I do think in general the tradition in the black community remains different than the white community.”

The short-lived tradition of Derby cruising is a recent reminder of that. Created as a way for a primarily young, black generation to celebrate the day, police shut the event down within one decade. While the gathering involved street vendors and mostly harmless teenage fun, those weren’t the images promulgated by countless news stories. Instead, Derby cruising was branded as violent, thuggish and lawless. And there were reasons for concern.

Cruising snarled traffic on Broadway, frustrating Louisvillians just trying to go about life in the West End. Gunfire erupted a couple times. Someone was shot and killed in 2005. Still, the 2006 crackdown felt rooted in racism, a sudden erasure of an African-American tradition, especially in light of the forgiven (if not heralded) debauchery erupting every year in Churchill Downs’ Infield.

“These things are cyclical,” Hudson says in hindsight. He remembers cruising being popular by white teens on Fourth Street in the 1950s, and weekend cruising in Shawnee and Chickasaw parks.

Hudson believes younger generations will form new ways of marking the first weekend in May. What they are, no one knows. But the festive nature of Derby tends to elicit a desire for community, friendship, whatever or whomever that may include.

“I’m not sure new traditions will replace the old as much as the old ones will fade out,” Hudson says.