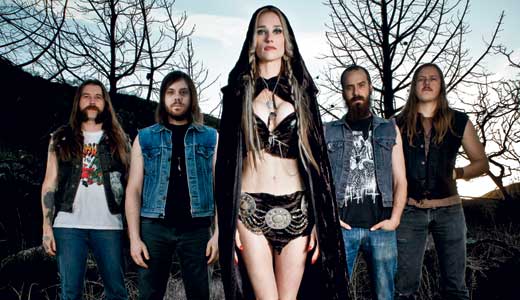 If there’s an It Girl in metal right now, it’s Jill Janus, the tall, blonde, statuesque, always half-naked, totally pagan operatic singer in Huntress. After years as a staple in the L.A. rock nightlife, DJing and promoting club shows, she formed her own band last year. Huntress quickly signed a deal with the monolithic European metal label Napalm, released a sexy, fantasy-themed music video for the song “Eight of Swords,” and is touring the United States in support of their debut album, Spell Eater, due May 8. LEO chatted with Janus over the phone before a gig in Las Vegas.

LEO: What got you singing opera at age 10?

Jill Janus: My mother discovered I had a big voice as I was singing along to her records, mostly Barbra Streisand. Not very metal, I know, but damn, that woman has some range! My mother began taking me to auditions, and I was cast in several local opera productions, which led to me touring Europe in my teens.

JJ: I sang and played bass, badly. We recorded in my best friend Ben Joplin’s basement in Oneonta, N.Y., after school. I still have those recordings on a cassette tape somewhere. It’s quite — what’s the word? — endearing.

LEO: How does Huntress go about writing songs like thrash epic “Eight of Swords”?

JJ: I typically give the boys a theme or a song title. Then (lead guitarist) Blake Meahl and (rhythm guitarist) Ian Alden bring compositions to rehearsal, and we all work through them as I write vocal melodies and lyrics. It’s a good process.

LEO: Where did the idea for the “Eight of Swords” video come from?

JJ: I had a vision. I asked the tarot to reveal one card that would become an epic metal song. “Eight of Swords” chose us. It was very focused and clear how things would develop. It was magical.

LEO: What do you strive for in “epic” metal?

JJ: We strive to be timeless. Aggressive. Melodic. Catchy. Witchy. These qualities embody our songwriting approach.

LEO: What does Huntress have in common with bands on Napalm Records, known for its roster of female-fronted goth-metal acts?

JJ: We’re not like any of the Napalm bands. What won us over was Napalm’s ability to understand the vision of Huntress. But we feel Huntress can tour with any genre of metal, so having something in common with other bands isn’t important to us.

LEO: Do gender and sexuality matter in metal?

JJ: I prefer to be sexless vocally. I despise most female-fronted bands; they seem weak and sexed-up by a stylist. It’s not authentic. I enjoy destroying those stigmas. I’m a witch and, as a pagan, nature and nudity are vital aspects of my life.

LEO: You went west from New York to transform yourself into a metal god?

JJ: Metal thrives in L.A. New York feels more punk to me. I struggled for years to find my band, and it’s been a difficult path. I love these boys like brothers and can’t wait to share this new journey with them. I’m coming to claim my crown. There will be blood.