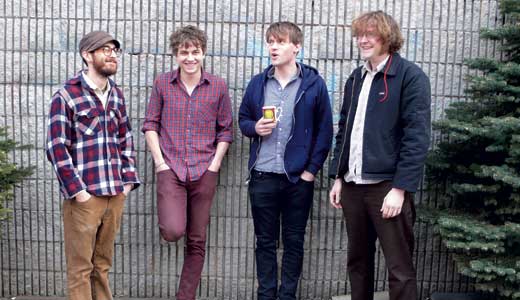 “I haven’t been to Louisville in years,” says Jarvis Taveniere, multi-instrumentalist for Woods. “I don’t think Woods has ever played there, actually. Me and Jeremy had an old band that played in a house … I remember a café with a cow in front or something.”

Vocalist/guitarist Jeremy Earl founded Woods in 2005 and has evolved the band from a lo-fi project to a full-fledged folk-ish band, quickly picking up plenty of critical praise, including numerous comparisons to the Grateful Dead reborn as an indie rock band. A new split EP with Amps For Christ was released on April 17.

The Shrimper label, known for their collaborative pairings, released some of Woods’ early recordings and is also releasing the new split, though Earl also runs his own established label, Woodsist.

“We recorded a bunch of stuff last year for our last record that just didn’t really fit,” explains Taveniere. “We were looking for a home for it … so we thought we could do something with this batch of songs.”

The split features some of Woods’ more abstract, collage-style sounds, “more acoustic, meditative,” says Taveniere, more appropriate when paired with Amps’ Henry Barnes. “I think Jeremy really relates to him … not touring, not playing a lot of shows, just making these cool records. That homemade quality; he does his own artwork …

“That’s why it was so freeing to start Woods — just do everything ourselves, make the records we wanted to listen to. They tend to be the ones that cover a little bit more ground. We didn’t really work toward it, it was just something we knew we wanted.”

LEO: It seems that you’re in a very secure place now, especially putting out your own records —

JT: Yeah, we do what we want (laughs). I mean, I partially assume that that’s what everyone does. Maybe that’s naive of me, but I couldn’t imagine doing things I didn’t want to do. Outside of just compromising with my friends and bandmates for the greater good.

LEO: Some bands do …

JT: Maybe if there was more money at stake, or I was a younger man, I could get in a situation like that …

I try to treat every project with that innocence, like it’s the first time. The fact that Jeremy and me are still friends and really enjoy getting together and playing music, after this long, I think says something. Might not work for everybody, but it’s how we’re doing it.

LEO: How do you keep that as you get older?

JT: You find little glimpses of it. Definitely, making records in a home environment, I still feel that same … I don’t know, it just feels right … You’re listening back to something on a 4-track, and you’re like, “Let’s start working on some cover art!” I’d love to retain that innocence and excitement.

JT: Ugh, yeah, no more of that. But everything else.

Woods with Mmoss and Gangly Youth