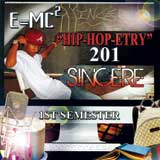 This is a distracting record. Not for anything he’s done, it’s just unsettling how much Sincere sounds like another local rapper, with just a sprinkling of Carter 3-era Wayne. Ears wander and make unfair comparisons to the other emcee, leading to a lower grade than justified. Don’t misread, this is purely a vocal quality; there’s no biting at all. Hip-Hop-Etry is a largely satisfying and, at times, excellent entry. The only drawbacks are features weighing some tracks down; it’s not a favor to put your crew on your record if they lower your quality. Sincere goes ad-lib heavy at times with rapper clichés (I lost count on “Nah mean!” after 70), but there’s enough to like here to keep listening. “Nuttin New” should serve as a template for his next record, alongside local tributes like “So Louisville.”