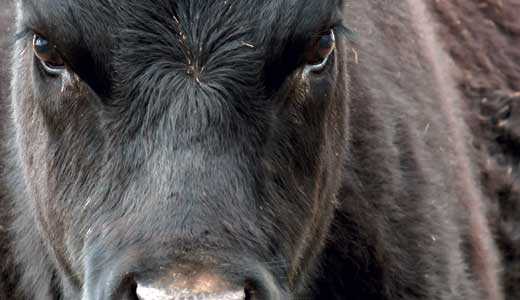 With all this talk of pink slime (sorry, I mean “Finely Textured Beef Trimmings”) it’s hard to imagine chopped meat becoming the “caviar of the future,” as some at the United Nations have predicted. But rising production costs, an estimated 3 billion more mouths to feed by mid-century, and the ridiculous amount of water needed to raise cattle would seem to bear this out: In the year 2050, beef will feed only the world’s most wealthy.

A full-page ad in a recent edition of The New York Times Magazine echoed the UN’s warnings, with a line of copy that read, “It takes 635 gallons of water to make one hamburger.” That’s a staggering number, for sure, but what makes the advertisement noteworthy is not the statistic. If you suspect that an environmental or animal rights organization is behind the ad, guess again.

Fidelity Investments, the multinational financial services company, is responsible for the campaign, entitled “Thinking Big.” The mutual fund giant claims to “see opportunity” here, but you can bet that has little to do with fixing our planet’s projected water problems. The reality is that Fidelity is figuring out ways to profit from regional water shortages, skyrocketing population and demand, and the type of water-related border disputes already on display in the Middle East.

The “Thinking Big” print ad is purposely vague with the details of this new opportunity, but a more fleshed-out video presentation on Fidelity’s website gives a better idea of how this plot is expected to play out. The clip’s doom-and-gloom factoids and graphics would not look out of place in an Al Gore production; however, the end product is far different from what we have come to expect from the eco-doc genre.

Instead of promoting conservation, “Thinking Big” encourages investment, hinting at a future where water brokering (i.e. privatization) is inevitable and how now may be the time to get in on the ground floor of this emerging commodity.

Invest wisely and in a few decades time, you may be one of those privileged few who can still afford a Big Mac! But if profiting off of drought is unpalatable to you, fortunately, another organization sees an entirely different brand of opportunity in the UN’s findings on agriculture.

The international “Meatless Monday” movement contends that skipping animal protein one day a week can do a lot to slow down many disturbing trends. Along with touting the various health benefits of cutting back animal intake, the group cites the growing, worldwide demand for meat and the incredible amount of water required to meet that demand — up to 2,500 gallons per pound of beef produced. (Fidelity’s hamburger must be a quarter-pounder.)

In addition to the water problem, the meat industry creates more greenhouse gas emissions than transportation does. Another UN finding states that livestock is responsible for about one-fifth of total emissions, with 40 calories of fuel energy spent for every beef calorie that reaches your fork.

And water isn’t the only resource that meat production is sucking dry. A Cornell University study determined that livestock consumes a majority of our grain, eating enough corn, soy and wheat to feed roughly 800 million people. Farm animals are also administered far more antibiotics than humans — about 80 percent of the total amount used — thereby reducing the effectiveness of important drugs like penicillin and tetracycline. (The Obama administration said in March that it would issue a ban on certain antibiotic use in livestock. We shall see.)

According to online tracking, national awareness of “Meatless Monday” across the U.S. is said to have grown to 50 percent. The program, which was started in 2003 by an ad man turned health advocate named Sid Lerner, now has 22 countries participating. Meatless Monday has received boosts from big name chefs like Mario Batali and superstars like Oprah Winfrey and Paul McCartney. The former Beatle actually spearheaded the organization’s UK affiliate and recently published “The Meat-Free Monday Cookbook” with Stella and Mary McCartney.

Closer to home, Michael Paley, the renowned chef from Proof on Main and Garage Bar, got on the Meatless Monday bandwagon in late February. Paley offers an evolving, seasonal, vegetable prix fixe at both restaurants each week. The move seems like a natural fit for him, as Paley routinely features local and sustainable ingredients from the Ohio River Valley, as well as his restaurants’ own farm (Woodland Farms). Mondays’ veggie-based offerings present further opportunity to preach the farm-to-table gospel.

“This is definitely another way of continuing our dialogue that eating foods from the source needs to become a way of life again like it once was,” Paley says.

Paley, an admitted “protein guy,” became intrigued by Meatless Mondays while doing a seminar on “misunderstood vegetables” at the Atlanta Food and Wine Festival last year, and he’s been impressed with how the movement has spread. He’s now using Meatless Mondays as an opportunity to educate diners on some foods they might not normally eat.

A less expensive Meatless Monday can be had at Garage Bar, which, in addition to a number of vegetarian pizzas, offers a weekly prix fixe. On that same Monday in March, $15 got you a salad and root veggie risotto that was decadent enough to make you forget about meat for a day.

A cool detail about the vegetables: They were provided in part by Groce Family Farms from nearby New Albany. It was interesting to learn that the young couple who run the 2-acre farm, Luke and Katherine Groce, are also members of Paley’s staff. As Luke Groce ran plates that night, he seemed to take special pride in some of the produce on my plate. Groce’s boss agrees that having a farmer follow his product from seed all the way to a customer’s plate is indeed a special quality.

“I think it is great,” Paley says. “It definitely breaks down communication barriers and is something everyone in the restaurant can be proud of. The best part is working with guys like Luke to grow specific things for us.”

With the warmer months upon us and the promise of summer’s bounty close enough to taste, Meatless Monday is feeling less like a sacrifice and more like a day to look forward to — particularly with people like Paley and Groce getting with the program.

In terms of a long view, we don’t need to hire a Fidelity broker to tell us that driving down the demand for a product typically lowers its price. Can Meatless Monday really become a big enough deal to affect the price of a hamburger in 2050? That obviously remains to be seen, but if not and beef prices do reach the UN’s forecasted levels, being vegetarian one day a week will certainly better prepare us for the inevitable.

For my money, taking more control of our diets and any projected food shortages is preferable to letting the meat industry sort it out for us. Previous attempts to lower the cost of meat have succeeded in an average price reduction of 3 cents per pound, but have also resulted in 7 million pounds of unwanted “Lean Finely Textured Beef” (that almost sounds good for you).

Call me finicky, but soaking ground connective tissue that once passed for dog food in an ammonium hydroxide marinade is, I think, not what the “whole beast” movement had in mind. Incredibly, the industry is standing by “pink slime,” with a Rick Perry-driven PR re-brand entitled “It’s Beef, Dude.” Who knows, maybe “It’s Beef, Dude” will catch on. Maybe pink slime will feed the world’s population in 2050. Maybe the industry will also succeed in mass-producing “In Vitro Meat” or “Schmeat,” the NASA-derived product that is essentially meat, except for the fact that it does not come from an animal.

Just in case, though, I think I’ll be keeping my garden as back-up.

It’s getting hot in here