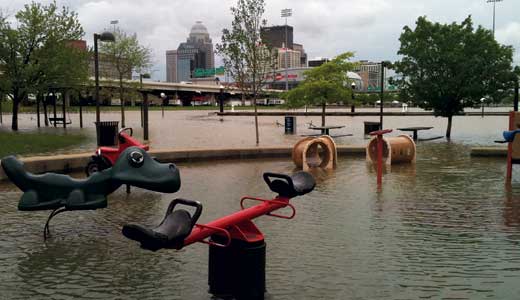 Something strange is happening. It’s in the air. No, really, it’s in the air. You can feel it. Step outside for a minute. OK, maybe you should put down the LEO first … now step outside. Unless, of course, you already are — then just stay there. Or walk around. But watch out for dog poo. Oh, and don’t forget to step back inside to finish the LEO. I’ll wait.

Welcome back. Now, did you feel that? Weird, right?

As a pro-life, conservative, capitalist (in that I am “pro” all life-forms, believe strongly in conserving the ecosphere, and want an economy that restores natural capital), it’s been a little hard to enjoy the spectacular weather this winter and spring (now called “springter”) without feeling a little sick to my stomach. March is the new May. And I’m not alone in that assessment — just ask the trees. The Dogwood Festival in Audubon Park this April 20-22? The dogwoods have been blooming for well over a month — here’s hoping they’re still in bloom by then. D.C.’s cherry blossoms beat the typical peak festival crowds by nearly two weeks this year. I have a friend in town with a seriously green thumb who marveled at his amped-up backyard garden herbs the other day, saying, “I’ve never seen them like this … it looks like the end of the summer, not the beginning of spring.”

Temps in the 80s in March … in Minnesota? Hyperactive herbs and dogwoods? Sounds positively verdant — what’s not to like? July, that’s what. If it’s 85 in March, what’s it going to be in July? 120? Last summer, Texas burned and Oklahoma melted during the hottest month … for any state … ever. Who will it be this year? There’s a new normal. Literally. When the National Weather Service recalculated its “normal” temperatures across the country based on averaging the last 30 years (as it does each decade), they went up by half a degree. So just remember, when the weatherman says “it’s 5 degrees above normal,” “normal” ain’t what it used to be.

But it’s not just the heat that’s disconcerting. Louisville had its wettest year in history last year — for the second time this decade. It’s starting to feel like we have new seasons now: summer, fall, crazy and drought. But that’s weather, not climate — and every climatologist will tell you that weather is different from climate. Weather is wildly variable, erratic — climate is an aggregated general long-term trend. You can’t pin any single weather pattern or event solely on climate change, right?

And yet, in the first decade of this century in the continental United States, the number of record highs has been more than double the number of record lows. If not for climate change, they would be offsetting each other. The frequency of large flood events has more than tripled since 1980. As have the number of extreme heat events. Pity they’re not happening in the same place at the same time. By the way, this is exactly what those pesky climate scientists have been predicting for years — more extreme weather events as a result of a warmer, wetter atmosphere. The good news? The number of Americans who believe in climate change is now 10 percentage points higher than it was two years ago, though still 10 points lower than it was two years before that. (Looks like the weather’s not the only thing that’s erratic.) But after this “winter,” if you’re not hip to the global weirding that’s happening, you need to get out of your basement more often.

So here we are: Earth is officially going off the rails, and we’re along for the ride. Heck, we’re driving … drunk … with the doors locked. What to do? Act like a 3-year-old.

My 3-year-old LOVES connect the dots — and who doesn’t? What’s more fun than linking a mess of dots together one by one until a complete picture suddenly emerges and what was confusing or hidden becomes clear? “Connect the Dots” is the inspiration behind the global wake-up call event on May 5, 2012, called Climate Impacts Day. On this day, thousands of groups in virtually every country on the planet will be making the connections between our collective actions, climate change, extreme weather, and its impact on our daily lives — because, as the great sage G.I. Joe would say, “Knowing is half the battle.”

The effort is being organized by 350.org, the non-governmental organization formed four years ago by acclaimed author/activist Bill McKibben and seven of his Middlebury College students to raise global awareness about the fact that 350 parts per million (ppm) of CO2 in the atmosphere is the upper limit for a stable climate. Incidentally, as of this February, we’re at 393.65 ppm and climbing at 2 ppm each year. And with a 40-year lag-time in the warming effects of atmospheric CO2 (due to the thermal inertia of the oceans), the freaky weather patterns we’re seeing now are only the effects of the 330 ppm of the mid-’70s. Such is the insidious nature of what we’re up against. You think it’s hot now? We haven’t even begun to pay for the climate damage we’re inflicting today. But until we see the whole picture, it’s hard for many of us to wrap our heads around this stuff in a way that we can act on in the here and now. Hence, we’ll be connecting the climate dots for everyone on 5/5/12 — especially my 3-year-old.

Hmmmm … 3-year-olds … May 5 … I feel like there’s something else happening in town that day, but I just can’t seem to remember …

Ben Evans is an award-winning filmmaker, co-founder of “YERT: Your Environmental Road Trip,” and owner of BEgreenCreative, which creates sustainability media for those working to heal humanity’s relationship with the planet.

What You Can Do …

In the face of an overwhelming challenge like climate change, nothing is more empowering than being part of something that feels big enough to matter. Here are some “big” things you can do locally:

Join the “Connect the Dots for Derby” event on May 5, Climate Impacts Day, and be a part of what promises to be an unforgettable Derby experience at Churchill Downs. The more the merrier. Visit 350.org or ClimateDots.org, and follow the links to the Louisville event.

Screen ”YERT: Your Environmental Road Trip” (a documentary that uses humor to connect the dots of sustainable solutions across all 50 states) for your church, business, school or community group (see yert.com for details).

Dig into local breakthrough conferences like the annual Bluegrass Bioneers (BluegrassBioneers.org) and Festival of Faiths (FestivalofFaiths.org), where you’ll meet game-changing thinkers and innovators like Scott Brusaw, inventor of Solar Roadways, who has an incredible plan to power America with garbage-absorbing, grid-replacing, photovoltaic roads. Believe it.