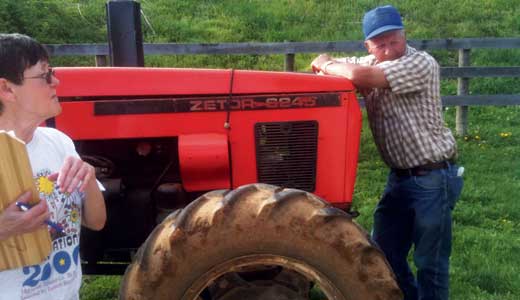 Sonia McElroy, a 64-year-old retired social worker, is going door to door through her small town of Milton, Ky., encouraging neighbors to sign her petition.

“Yeah, I’ll sign it,” says Donald Clifton, a retired utility worker and local blue ribbon honey maker. “I doubt it will do any good, though. They’re kind of hard-headed over there.”

McElroy is seeking enough signatures to run for a seat on the board of directors of Shelby Energy Cooperative, the rural energy company that provides power to her in Trimble County, as well as 15,000 other customers in nine adjacent counties.

The pessimism of Clifton and other Shelby Energy critics stems from the fact that if McElroy succeeds, she’ll be the first to do so. For as long as anyone can remember, board members have been appointed from within.

Like other frustrated energy cooperative members around the country, McElroy is attempting to bring transparency and accountability to Shelby Energy, whose closed meetings and inner workings have been free from public scrutiny for years.

McElroy is running in an effort to bring openness to the board — which requires members to ask permission before attending meetings — and to bring cleaner and more affordable energy, with programs allowing financial help for home weatherization.

“There’s a whole lot of room for change, but I think you have to have openness and individuals feeling like they can come and have things put on the agenda,” McElroy says. “You’ve got to get started with that so then some of these other improvements can come about.”

But McElroy has faced roadblocks, as the cooperative has tried to keep her off the ballot. Nevertheless, McElroy remains confident she’ll collect the required 100 signatures in time for the company’s annual meeting on June 22, at which point customers will be allowed to vote.

“I’ll appreciate your vote in June, because I will get on that ballot,” McElroy tells Clifton. “Because Donald, things do change. I know I have an uphill battle, but I’m going to do it.”

When Sonia McElroy saw that Shelby Energy was taking applications for a board position last year, she was interested, but figured she stood no chance of being selected.

Then last fall, when McElroy attended a meeting of neighbors organizing against a proposed LG&E coal ash landfill near her farm, she learned of another potential opportunity: Sierra Club organizer Lauren McGrath informed McElroy that the term of the board member in her district was ending in 2012, and there was an opportunity to run for the seat through petition.

McElroy then connected with Shelbyville resident Carlen Pippin, a retired veterinarian and Kentuckians for the Commonwealth activist who has spent years trying to gain access to Shelby Energy board meetings.

In 2009, after rate increases were discussed, Pippin contacted the board to obtain meeting minutes and find out how to attend future meetings. He was told the board was not subject to open records laws, and that he would need approval 30 days in advance to attend their meetings.

Though Pippin concedes transparency has improved slightly, he says his biggest concern “is that every director in 70-plus years has been appointed. There has never been a member elected to the board by petition. Never.”

The first person to try to run for the board, Kenny Taylor of Pendleton, was unsuccessful last year after the board deemed many of his collected signatures ineligible.

“The way Taylor was treated was absolutely ridiculous,” Pippin says. “And now they’re giving Sonia this erroneous information. (Shelby Energy) says this had never happened before and they weren’t prepared for it. They’ve had a year to prepare for it!”

The erroneous information Pippin refers to is what McElroy faced upon setting out to collect signatures in February.

With the April 26 signature deadline approaching, McElroy had to wait more than a month to receive a map and list of eligible Shelby Energy customers. Then on March 23, the company informed her that the petition form she was collecting signatures on was ineligible — despite previous approval — and that she would have to start over with a new form that required each signer to give their account number, a daunting prospect.

The same week, Shelby Energy CEO Debbie Martin told McElroy she was not eligible to run for the board since her bill had been in her husband’s name.

After the Sierra Club’s McGrath pointed out to Shelby Energy attorney Donald Prather that such decisions violated their bylaws, he conceded that McElroy was in fact eligible to run and the petition she was using was valid.

“The Cooperative is not trying in any way to inhibit anyone from running for a director seat,” Prather wrote in a follow-up email. “Any actions or inactions which might appear to be such an effort are in fact rooted in the fact that the Cooperative, at least not since the 1980s and I believe ever, has not had anyone even attempt to run on a petition until last year.”

Prather tells LEO that he doubts there will be any problem with McElroy’s eligibility going forward, but adds that the appointment system has worked just fine for years.

“That’s how it always worked, and quite frankly, it worked very, very, very well,” Prather says. “Overall it’s been the finest group of people I’ve served with on a board. They’ve just been very honest, high integrity, dedicated, etc. And I’m not just giving you a spiel on that.”

After resuming her door-to-door campaign, McElroy soon discovered another hitch: Many homes turned out to be Kentucky Utilities customers. Though Trimble County is split between those under KU and Shelby Energy, the map McElroy was given provided almost no detail on which neighborhoods had which.

Though she is suspicious of the hurdles she’s faced, McElroy remains determined in her effort.

“They did stalling tactics like this to (Taylor) last year, and he told me, ‘Well, you can forget it. It’s rigged, and they won’t let you win.’ But he did not have the support that I have.”

Not only does McElroy have the advice and support of the local Sierra Club chapter, but also of neighbors who are out collecting signatures on her behalf. A local barbershop has a stack of petitions ready for customers to sign.

And so far, McElroy says every eligible person she’s approached has signed, and many have expressed frustration with the cooperative’s service and lack of transparency in the process.

In 2010, Eastern Kentucky Power Cooperative, the rural energy company Shelby Energy purchases its power from, was the subject of a scathing audit due to financial mismanagement in the face of multiple rate increases.

One of the audit’s recommendations was not to the board, but to rural cooperative members, saying that in order to bring about real reform, they must band together and change their company from the inside.

McElroy has nearly 100 signatures and plans to do just that.

“This is not the only cooperative that is under fire,” McElroy says. “They all are, because people are saying, ‘This isn’t right, we own that place, they don’t!’”