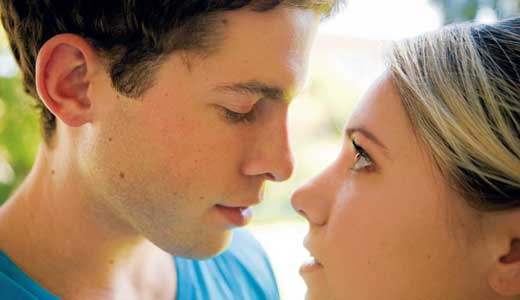 During college, Los Angeles film producer and former Trinity High School student John Paul Rice had his first taste of moviemaking while on the set of Jerry Bruckheimer’s 2000 hit, “Remember the Titans.” The acting gig had Rice playing a small role as an uncredited Titan. It seems that Rice caught the showbiz bug while on the gridiron with Bruckheimer, an eight-time Emmy winner and Kentucky resident. Rice would go on to a handful of what he called “micro-budget indies” before moving to Hollywood in 2001 to pursue filmmaking in earnest.

Rice eventually formed No Restrictions Entertainment with frequent collaborator Edgar Michael Bravo. Bravo is the writer-director of “Mother’s Red Dress,” as well as two other full-length projects that Rice produced. “Mother’s Red Dress” made its Kentucky premiere at the Derby City Film Festival in February, and returns to town for a weeklong run at Village 8 Theatres with its producer, the former Louisville resident, in tow.

Adapted from real-life stories, the low-budget offering is one part overwrought family drama and one part love story. This comes together in something resembling a Zac Efron-fronted teen romance suffering from post-traumatic stress disorder. Writer-director Bravo uses a fractured plot structure that shoots back and forth in time, keeping viewers off balance with a blurry collage of flashbacks, dream sequences and the present-day pursuit of Ashley (Alexandra Swarens) by Paul (Timothy Driscoll).

The structure is effectively jarring — sometimes too jarring. A late plot twist explains away most of the erratic behavior and mounting questions, but does not go far enough in assuaging the confusion caused by characters who all seem to be running away from each other. In one scene, Paul’s desperate mother lures him home with news of a serious illness, then splits for the coast the moment he comes through the door. At another point, Paul’s estranged father makes a play to win back the boy’s affections, then suddenly knocks Paul out with a shot to the jaw.

For the most part, the story’s randomness adds up once Paul’s repressed trauma is decoded late in the picture. But the trip there feels rudderless — a sense that doesn’t entirely lift after the big reveal.

Scheduling 35 showings of “Mother’s Red Dress” is ambitious for a project this size (there are five screenings per day). But reduced ticket prices will help fill seats, as should the good cause the presentation has attached itself to: April’s Child Abuse Prevention Month. The film — which, at its core, is about how violence tears apart Paul’s family — is being shown in conjunction with Family & Children’s Place, a family services organization that offers programs like child advocacy and homeless prevention to 6,500 Kentuckiana families a year.

“For too long, issues like child abuse have been absent from public discussion,” says John Shoulta, public relations manager of Family & Children’s Place. “Whether around a dinner table, in a classroom or in an artistic setting like a feature film, we need to address these problems. We commend ‘Mother’s Red Dress’ for shedding light on abuse during Child Abuse Prevention Month.”

Following this weekend’s screenings, producer John Paul Rice will be present for an audience Q&A.