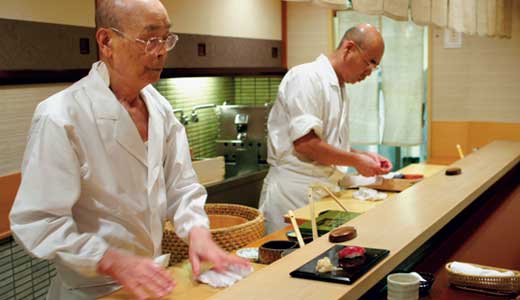 Hidden underground at one of Tokyo’s busiest Metro stations is a restaurant compact enough to fit inside a subway car. Sukiyabashi Jiro has 10 seats, no bathroom and the one and only Jiro Ono, an 85-year-old “shokunin” who is widely considered the best sushi chef in the world. This comes from folks like Anthony Bourdain, who does his share of eating, as well as Michelin three-star chefs like Joël Robuchon and Eric Ripert.

Jiro’s tiny sushi bar at Ginza Station is itself an unlikely recipient of three Michelin stars, one of only 106 restaurants in the world to achieve this distinction. A celebrity in Japan who has been recognized as a national treasure, Jiro appears poised for international stardom with the April 13 release of “Jiro Dreams of Sushi.”

The debut documentary from David Gelb covers the maestro’s long career and family life, as well as that of his 50-year-old son, Yoshikazu, who waits patiently to take the helm. Yoshikazu may go on waiting. His father is an energetic octogenarian who hates days off and, as Gelb’s title suggests, wakes up inspired to make sushi.

As a film, “Jiro” may lag a bit for those who are not chefs, foodies or Japanophiles, but it’s still worth a look. Most will find plenty to take away in the film’s universal themes, which include a primer on success, an obsession with perfection, and knowing when to put your knives away. However, if you are someone who dreams of the perfect omakase, the exacting kitchen scenes and pursuit of deliciousness will make your mouth water.

For all of “Jiro’s” charming drive and triumphant payoff, there is an overarching solemnity to the film. The father and son’s grinding, daily chase of the unobtainable is appropriately set to repetitive, modern classical music from composers like Philip Glass and Max Richter. The mood is often lonely and boxed-in as these chefs, and the expert vendors who supply them, fixate on surpassing what they did yesterday.

Complicating these gropings after perfection is the ticking clock of an over-fished ocean. There is a palpable sense of doom during a montage that shows three pieces of sushi dissolving into thin air, while the master chef complains about not being able to find any akagai (red clam), hamaguri (hard shell clam) or decent anago (saltwater eel) at Tokyo’s markets. These are items that can be substituted for; the dwindling supply of tuna and shrimp each morning is more serious.

Gelb’s vanishing fish remind us that art forms would die even if their masters could find a way to live forever. What’s most poignant is not the black-and-white archival footage of the Tokyo fish markets or Jiro’s talk of the abundance that once existed there. It is rather a speech from his son, Yoshikazu, who remembers when sushi was too expensive to eat regularly — whereas today you can find a lower-quality form for next-to-nothing on conveyor belts in Tokyo convenience stores.

Thirty-mile-long driftnets and 75-mile-long fishing lines get more people fed, but they are also depleting the ocean. If this dilemma calls to mind our own unsustainable practices — factory farms and value-menus — it should. One of the successes of “Jiro” is that it demystifies sushi, showing how it takes not magic but years of hard work to perfect the craft. Another is its observation that, despite the long, illustrious tradition of the cuisine, it very well could cease to exist if business goes on as usual.