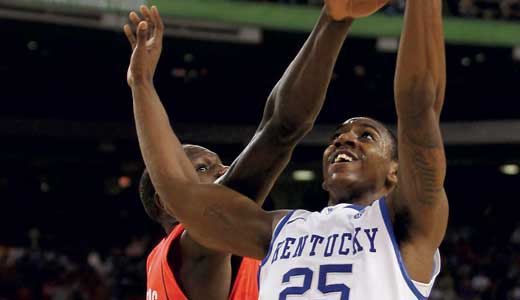 There it was — the situation Cardinal fans craved, the one they believed would cause the Big Blue Nation to shudder.

The moment midway through the second half that Louisville fans had been hoping for since arriving in the Crescent City for a date with the University of Kentucky, the moment that had the faithful seeking pre-game gris-gris at the Voodoo Museum in the French Quarter.

But before that instant of truth arrived, Kentucky was stunning from the opening tip, efficient, showing no nervousness and total command. The Cats hit their first four shots, seven of their first eight. It could have been a knockout.

But if this band of Cardinals has proved anything during this 30-win, Big East title season, it’s that they’re all pluck. Louisville — bumbling and fumbling as was their wont — stayed within range.

Several minutes of game time before this righteous instant of parity in the second half, Kentucky’s express train to Titletown was barreling along on schedule. The Cats with a 13-point lead, 45-32, were playing with that aura of invincibility developed during a powerful two-loss season.

Then Louisville buckled up, displaying its trademark tenacity.

The irrepressible Russ Smith completed one of his incomprehensible drives for a layup: 46-36.

Then came one of those sequences that underscored why this season’s victories, though plentiful, never came easily for this overachieving Cardinal squad.

Back at the other end, Wildcat point guard Marquis Teague missed a rushed jumper. Russ Smith finally tallied after Peyton Siva grabbed a rebound of his own missed attempt: 46-38.

The Cards were coming along, but it was harder than finding an open table at Cafe du Monde at midnight.

From there it was shoot, miss, rebound, repeat. Finally, Dieng scored: 46-40.

It was Chane Behanan’s turn to toss up a shot that wouldn’t fall. But Wayne Blackshear, displaying the hoops acumen Cardinal fans had been watching for all during his injury-plagued freshman year, flew in for a follow slam: 46-42.

By this time, if you were a U of L fan, your heart was pounding furiously with expectancy. You were out of your seat, screaming, anxious for the next turn of events.

A follow slam by the amazing Anthony Davis and a few free throws brought the tally to 49 UK, 44 U of L.

At this juncture, it would have taken Watson, IBM’s “Jeopardy”-winning super computer, to tally the collective blood pressure of the Red & Black Faithful and the Big Blue Nation.

Then, Peyton Siva calmly arced in a three from the top of the key.

THE Moment. Game on.

Cue Kenny Loggins. “This is it,” prayed Cardinal fans, “make no mistake about it.”

How this 2011-12 edition of the University of Louisville Cardinals clawed its way to that situation at that point in time remains elusive still. The team features two walk-on starters. A pivotman so naive he didn’t understand last year why Louisville had no more games to play after losing to Morehead. Then there’s that diminutive spark plug who fires off the daffiest shots, throws it away at critical times, gives his coach bunny ears on national TV, and is beloved by every Cardinal fan.

This is a team about which one pundit — OK, me — wrote at the end of the regular season, which Louisville closed with two straight defeats and four in their last six, “U of L has a better chance of ending the season on a four game losing streak than it does getting to the second weekend of the NCAAs.”

That little team that could with 9 minutes to play in the national semi-final was in the grill of the best team in the land, dead even with its hated rival for a spot in the championship game.

Ah, but, that little team that could … sigh … couldn’t.

Four unanswered points within a minute started an 11-2 run that sealed the deal.

There have been campaign-ending losses during my 60 seasons of Cardinal fandom that have taken years to shake. It took the national championship in 1980 to finally get over the overtime loss to UCLA in ’75. Southern Methodist University in ’67. Houston in ’83. Those jarring setbacks still on occasion cause acid reflux.

This 2012 loss to Kentucky in the national semi-final does not fall into that category. I feel disappointment but am not devastated.

It could be that I’ve been at this long enough to have actually developed healthy perspective.

Frankly, it has more to do with how this lovable Cardinal gang overachieved. How they overcame and succeeded despite injuries, woeful shooting and too many turnovers. How these guys reinvigorated themselves for the post-season, finishing with eight wins in their last nine games. How they dug deep into every nook and cranny of their souls for resolve and fortitude.

On Louisville’s last possession of the season, a loss was assured. One more bucket would have been sweet. But the Cardinals were walking zombies. They had given everything they had.

This season ends with the tank on empty.

This season ends for a team and its fans with serene smiles and a look ahead.

Next time around, last Saturday’s roles might be reversed.

College hoops Pontificate Laureate Dick Vitale had this to say during one of his post-game rants: “Speaking of Louisville, watch out, they could be pre-season numero uno next year. Behanan, Dieng, Siva …”

And Blackshear and Luke Hancock and Mike Marra and Stephan Van Treese and that Russ Smith fellow.

Not soon enough, another season shall begin.