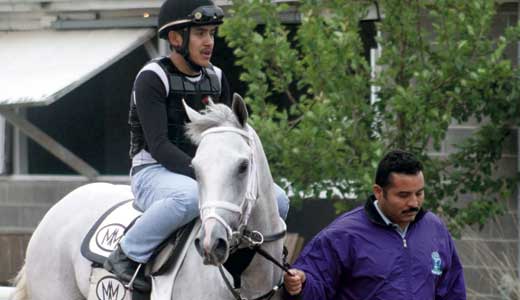 The ideal Kentucky Derby scenario unfolds as a gathering of the best horses from the East, the West, and all other worthy contenders from far-flung locales — including overseas.

Of course, it doesn’t always work out that way. Sometimes, one horse overshadows the rest, while in other years, no horse casts much of a shadow. But this 138th Kentucky Derby brings six or seven top-quality contenders that appear to be heading to Louisville at the top of their game. All that remains is for Hansen — the 2-year-old champion of 2011 who has come out running again this year — to give a strong performance in the Blue Grass Stakes Saturday at Keeneland, and the field will be star-studded for one of the most intriguing Derbies in years.

With three weeks to go, here’s a rundown of the big Kentucky Derby prep races …

Best of the East: Gemologist remained unbeaten with a sharp triumph over Alpha in the Wood Memorial Saturday in New York. Gemologist strode clear at the head of the stretch, but Alpha came charging and looked like he might run down the leader. Near the finish, Gemologist kind of “rebroke,” as they say, churning up a late burst to prevail. Todd Pletcher trains Gemologist, who also won the Kentucky Jockey Club last fall at Churchill Downs.

But Alpha’s trainer, Kieran McLaughlin, might have been the happiest horseman.

“Everything went great except the photo,” McLaughlin says. “Had he won, it would have been perfect, but we did pass many tests. Good in the gate, took dirt in the face, ran great, belongs in the Derby. It was a real, true, great prep.”

Best from Florida: Jockey Calvin Borel and Take Charge Indy took charge of the Florida Derby from the outset. Borel dictated a pace that allowed his horse to accelerate in strong stride at the end. Union Rags, who likes to settle early and then come running, got boxed in traffic, but did get up for third when he got clear.

Previously, Union Rags had looked wonderful in winning the Fountain of Youth, and was being mentioned as a possible overwhelming favorite for the Kentucky Derby. That talk has simmered, but many of Union Rags’ backers seem prepared to stick with their horse. And they should.

But just as this story wandered from the winner to the beaten favorite, many bettors might overlook Take Charge Indy. That could be a mistake, warns trainer Pat Byrne.

“No. 1, this horse is seriously talented, has tractable speed, and he rates,” Byrne tells The Paulick Report. “A horse that does all that is dangerous. Calvin was just ‘walking the dog,’ but he could have sat second or third, and won.”

Best in California: The fastest Derby Prep climaxed in a thrilling duel down the stretch at Santa Anita, as I’ll Have Another beat Creative Cause by a nose in the Santa Anita Derby, with stubborn Blueskiesnrainbows third, just a half length back.

Creative Cause has been a leader of his class all along, third behind Hansen and Union Rags in the Breeders’ Cup Juvenile last fall, then winning the San Felipe in March. Thus the gray already had plenty of “graded stakes” earnings to get into the Kentucky Derby. Creative Cause did not need to win the Santa Anita Derby. But I’ll Have Another did.

Not that an accounting problem matters a lick to racehorses.

Down the Santa Anita stretch, I’ll Have Another and Creative Cause laid everything on the line. At the wire, heads were bobbing, but I’ll Have Another forged a couple inches ahead and won the photo by about that much.

I’ll Have Another trainer Doug O’Neill took a chance with jockey Mario Gutierrez, a previous unknown who recently shifted from Hastings Park, in Vancouver, to the tough southern California circuit.

“He’s such a brilliant rider, and he’s got real finesse,” O’Neill says. “I loved the way the race unfolded and how Mario had him positioned going into the first turn. Creative Cause coming up the inside definitely gave me a scare, but our horse fought on. He’s doing so good. Hopefully, he comes out of this good and if he’s 100 percent, it’s on to Louisville.”

Mike Harrington, trainer of Creative Cause, isn’t conceding anything.

“I thought the horse ran a helluva race,” Harrington says. “I thought Joel (Rosario) rode him perfectly. The other horse beat us today, but will he beat us next time? I don’t know.”

Best in the Bluegrass: The star of Saturday’s Blue Grass Stakes at Keeneland is Hansen. Owned by Kentuckians Dr. Kendall Hansen, Dr. Harvey Diamond and Jim Shircliff, the almost-white thoroughbred is the leading money winner of all Derby candidates, with $1.4 million banked. Chief challenger, and maybe a serious horse, too, is Prospective.

The Arkansas Derby, also Saturday, is headed by Bodemeister.

Hansen began his career with two wins on a Polytrack artificial surface at Turfway Park. He then took two of three on dirt, and now is back to Polytrack at Keeneland — with a return to dirt in the Derby.

Couldn’t all that surface switching confuse a horse?

“No,” says trainer Mike Maker. “Once he gets into the starting gate, he has nothing on his mind but running.”