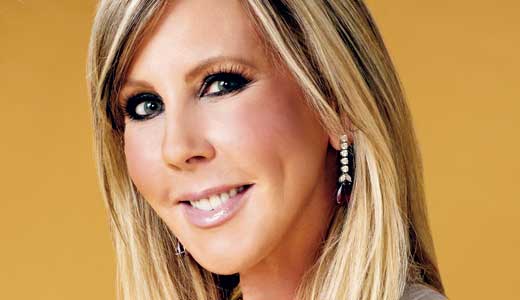 The Kentucky Derby has always attracted celebrities, though not some of the culture-defining figures one might expect. While fans of New York’s sports teams can depend on seeing Adam Sandler or Lady Gaga on an average day, and the Coachella music festival attracts hip movie stars, Derby has, historically, been most attractive to reality TV personalities, lesser-known rappers, fratboy chef Guy Fieri, and the like.

Vicki Gunvalson is a reality star visiting, and though she hasn’t had a career to rival Gaga’s, she has thrived over seven seasons with Bravo’s “The Real Housewives of Orange County,” the only original “cast member” left. Gunvalson has also distinguished herself as an insurance company owner, successful and self-sufficient regardless of the men in her life. She’s probably also the only “Housewife” open to speaking with a snarky alt-weekly in service of promoting her charitable work.

Vicki Gunvalson: You’re stationed in Louisville?
LEO: Yes.
VG: Wonderful. I love that city. It was the first time I had been there, last year, so I’m really excited to be coming back.

LEO: This poker tournament is a fundraiser for Blessings in a Backpack. How did you get involved with them?
VG: It’s a great charity, to be able to give these children an opportunity — so many children in the United States are missing out on so many things, and we’re always worried about other countries instead of taking care of our kids right here. I was part of this charity last year, and it just really struck a chord with me; I want to be part of it every year from now on. It’s a great way to see how it’s affecting people in real life, not just giving to a charity where you don’t know where it’s going. It’s helping these kids who are very vulnerable to their environment, and they can’t change it.

LEO: How good of a poker player are you?
VG: I am not good at all! I lasted two rounds of celebrity poker last year, and Nate from Boyz II Men was trying to help me (laughs), and it didn’t go too good. He had a real serious face on, and I said, “I don’t know, I’ll hit!” He said, “This isn’t blackjack.” At the end of the day, it’s about having fun …

That’s my take, especially after exposing my life on a reality TV show … you can’t take life too serious anymore, when the editing comes back and they do things that you never thought they would do … I just focus on giving back to others, and blessing others along the way in life is what we all should be doing. That’s my goal. And do a little “woo-hoo” along the way, right?

LEO: Did you interact with any other celebrities at Derby last year?
VG: You know what, it was actually quite funny — Prince Albert (of Monaco) had come up to me, in the midst of me just talking to other people, and he said to me, “I just really admire you and I love your show.” So I said, “Oh, thank you! Do you want a picture?” I didn’t know who he was (laughs). He says, “I’d love a picture.” … Anybody could come up to me, other than the country music artists, and I wouldn’t know ’em.

LEO: Do you follow the horses?
VG: No (laughs), are you kidding me? I just follow the outfits! It’s all about the outfits and who’s wearing what. That’s what I’m about.

The Derby Poker Championship takes place Thursday, May 3, at the Seelbach Hilton. For more info, go to derbypokerchampionship.com.