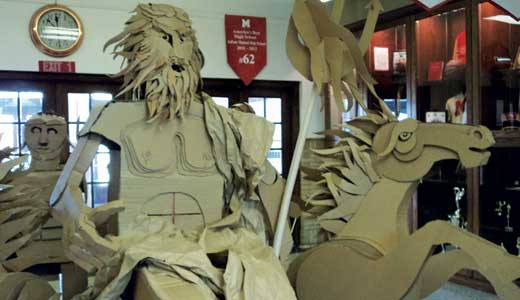 Last September, 85 duPont Manual students were among the 500 participants of the IdeaFestival at the Kentucky Center for the Arts. This weekend, Manual’s own offshoot festival takes root. IFManual, a student-run version, kicks off Friday and Saturday. The lineup for the event, developed by the students and faculty and aimed at inspiring a cross-pollination of ideas across various academic disciplines, includes lectures from professors at UK and U of L, local musicians, entrepreneurs and educators, in addition to student speakers who will try their hand at sharing ideas in the “TED talk”-style format.

The seed for IFManual was planted two years ago when senior class president Michael Perry attended the festival and then convinced principal Larry Woodridge that more students should have the opportunity to attend. The contingent who went the next year spearheaded the extension of the IdeaFestival back to Manual’s student body. Unlike producing something hypothetical, like a “model United Nations,” IFManual is a real event — real ideas, real creative works and real collaborations that have the potential to influence our community.

Manual, whose curriculum is divided into specific areas of concentration, took a cue from the diversity of the original festival: Every area of study contributed something unique to the event programming and organization. Communication students worked on media coverage; Youth Performing Arts School students worked on presentations and performances; Math, Science and Technology (MST) students developed a website and logo for the event; and the High School University (HSU) students worked on the logistics of planning and event execution.

Under the direction of teacher Doug Deweese, visual arts students worked on a cardboard replica of the famous Trevi Fountain in Rome. Manual’s version of the elaborate fountain is impressive not only for its simplicity (it is made from cardboard, hot glue and brown paper) but also for its scale (it has an impressive footprint of 100 square feet). The work was made by teams of students who assembled the individual components during a single lock-in session at the school. The resulting fountain speaks to something that seems to be the zeitgeist of this whole event: Given the opportunity to do something complicated, collaborative and non-conventional, Manual’s students rise to the challenge. From consumption to production, they have extended the circle of learning to the greater community — something that shows great maturity and insight.

Highlights of Friday’s program include professor Nathan Irvin of U of L speaking on “The Emergence of the Global Mind,” and a performance by jazz musician Harry Pickens, with Saturday’s program featuring lectures on “Branding” and “The Sweet and Bitter Nature of Social Connections.” Manual students Tyler Darnell and Zoe Schaver will look at “Autonomy and Self Organization” and “The Importance of Media in Society.” Other featured student work will include piano, string duet and classical guitar performances. JCPS Superintendent Donna Hargens and Mayor Greg Fischer will attend the opening on Friday.