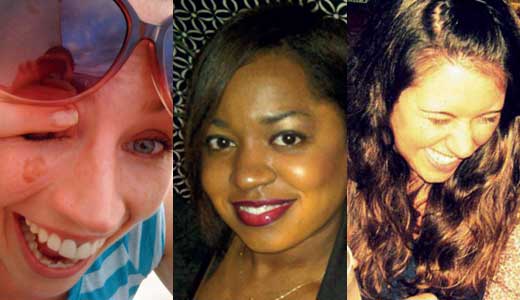 It’s time again for “The Funny Ladies of the Ville” show. The all-girl stand-up comedy revue is stacked this year with eight of the funniest comedians in the area, all of whom happen to be female. There will also be live music by Bridge 19, an acoustic duo featuring Amanda Lucas and Audrey Cecil. Some of the funny ladies — Holly Lynnea, Mandee McKelvey and Lindsay Boling — sat down to talk to LEO about the show.

LEO: How is the Louisville scene different than other scenes you’ve been a part of?
Mandee McKelvey: We’re supportive. I’ve been to cities where, even on an open mic or emcee level, you can get banned from one club for simply performing at another club. That doesn’t happen here.
Holly Lynnea: It’s like a family … a little dysfunctional at times, but it’s a family. And we’re more welcoming to new comics coming into the art or just into the scene.
Lindsay Boling: The thing about Louisville is that everybody really knows each other. I’ve been to Chicago many times, but every time I go up, it’s new people all the time.

LEO: Why are these all-girl shows important?
MM: I think this one is important for one reason: Every single other time I’ve been on an all-female show, it’s been in competition form. So usually when they get us all together, they pit us against one another. This is the first time we get to perform where we’re getting to lift each other up.
LB: All the time I get introduced with “… and now a lady,” and I’m, like, “Why is that so weird?” It would be weird if they were, like: “… and now a kangaroo is going to do a set.”
HL: Typically, when shows get booked, they end up being all-male shows and you don’t get a female perspective from the stage.

LEO: Can the girls out-funny the boys?
LB: Certain girls … yeah. But comedy isn’t a competition, it’s an art — you don’t see theater competitions or anything like that.
MM: I love hearing there are no funny female comics. The thing is, in comedy, men outnumber women 20 to 1 — and 90 percent of male comics are shit. And since there’s less women, even if we carry the same ratio, it just looks like we have less talent.
HL: Our packaging is a lot better. But there are certain things people just do not wanna hear come out of a female comic’s mouth. We’re supposed to be dainty, nice, polite and sweet — like we don’t have issues. We all do, and we’re not just nagging, complaining and male-bashing.

LEO: Is there a line you won’t cross for a laugh?
MM: I’ll tell you what I won’t do … it’s pander. As long as I think it’s funny, I don’t have any lines in regards to what I think is funny.
HL: I just wanna make sure that I’m being true to myself. So if I wouldn’t talk about it in general, I won’t talk about it on stage.
LB: Umm … no. But there are some things I won’t do if my family’s in the audience, for sure.

LEO: Which comedian on this show is most likely to do the walk of shame the next morning?
MM: If I have it my way, it will be me and Teresa McCammon doing it … out of the same room.
HL: With groupies? We’re all still trying to get to the groupie level.
LB: If you come to the show, maybe you can find out …