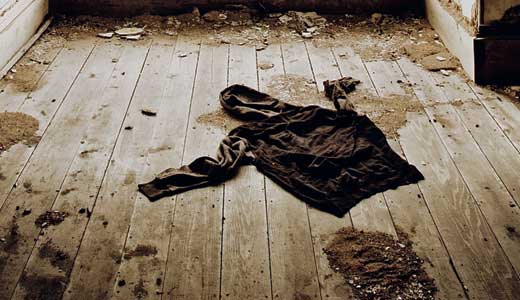 Louisville author Kirby Gann would like to introduce you to someone: “Shady Beck, the walker-away from dazzling car wrecks, subject of several profiles in the Pirtle Notice paper, she of the hair like vivid champagne bubbling past her shoulders, hair that seemed a celebration whenever Cole saw it freed from its usual ponytail; her gray eyes had boys whispering her name into clutched hands at night before they fell into dream.” With Gann’s intense prose bringing such sensuous life to his evocatively named characters, is it any wonder that his readers fall readily and wholeheartedly into the dreams he crafts?

In his new novel “Ghosting,” the Spalding University writing instructor and Sarabande Books editor brings readers a strong sense of place to go along with richly drawn characters. Pirtle County is fictional, but Gann knew this follow-through on “Our Napoleon in Rags” would be, as he tells LEO, “a Kentucky book. I wanted to play with a lot of clichés — what people outside the state think about Kentucky. Horses and farms, and bourbon — though I never figured out how to get bourbon in. And you also have the weed factor. And the Kentucky blue people — from a genetic disease passed along in Eastern Kentucky. I have a character who has that. Even though there’s a cure for it now, he decides that he doesn’t want to be cured, because it gives him a sinister air.”

With criminal elements, addiction and odd traits throughout, “Ghosting” is a 21st century version of the Southern Gothic tradition. Gann says, “I don’t mind the label at all — probably because I don’t think all my books fit into it.”

Two things readers should watch for and enjoy in Gann’s work are his suggestive, Dickensian names, and his determined approach to word choices. The names are gathered from a variety of sources, but one is particularly noteworthy. “We live literally right next to the wall of Cave Hill. It’s such a beautiful place — and I have some family and friends in there. But as you’re walking through, certain names catch your eye. And here’s the thing about finding a character’s name: I’ll change the names as I’m writing, until I find the one that fits that personality. In terms of the drug kingpin that’s in the center of this book: (Greuel) wasn’t his name until the last draft of the book … I wanted to have a name with a connotation for what this guy was like.”

Gann’s style, which is deliberative but not morose (he’s happy that black humor balances the melancholy story elements), includes great care with an expansive vocabulary. “On the one hand, I’m going for precision. It says something about our standards of language today that when you’re really going for precision, a lot of people can interpret that as the language being heightened. It’s not that I’m trying to be fancy; I’m trying to find the exact word that I’m trying to express in that paragraph, that sentence. On the other, my characters in this book are lower socio-economic-class people, and I wanted to lend them an amount of dignity to their lives. These are hard lives. There are no master’s degrees among them, but these are individual, intelligent people in their own fashion, and I wanted the language to reflect that.”