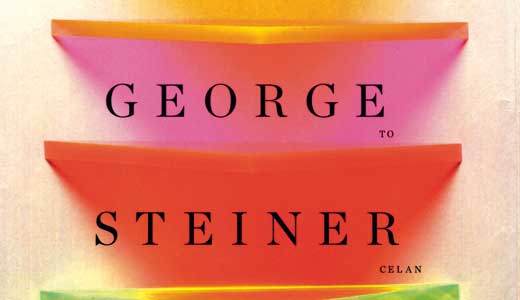 George Steiner, the celebrated polymath, summarizes his most recent book, “The Poetry of Thought,” with a deceptively straightforward claim — that “literature and philosophy as we have known them are products of language … their means, their constraints are those of style.” To support his argument, Steiner draws evidence from virtually the entirety of Western art and thought, beginning with Heraclitus and the pre-Socratics, and ending somewhere around Heidegger and Paul Celan. If none of these names sound familiar, you can save yourself the trouble and stop reading here.

For the last half-century or so, Steiner has been a staunch advocate of broad, as opposed to deep, knowledge. His latest essay, “The Poetry of Thought,” is as broad and bold as anything in his long career, tracing about 2,500 years of poetry and philosophy in just over 200 pages. And yet, as bold as his project might seem, there is something narrow about Steiner’s vision of poetry and philosophy. His canon is unapologetically conservative and Eurocentric, leaving out most Americans (except for William James and Henry James, and the suspiciously European T.S. Eliot), to say nothing of any from a non-Western tradition.

While his canon is composed of the usual suspects, Steiner has a real gift for tracing currents of thought across time and space. At his best moments, he produces surprising connections, tying together Plato, Bergson, Debussy and Woolf in a few deftly woven strands. Other times, his thinking is more idiosyncratic, such as when Steiner announces, without explanation, that Plato’s dialogues are the dramatic equals to the plays of Shakespeare and Ibsen, a position shared by basically no one. In general, however, Steiner handles his materials in a breathless and intermittently dazzling manner — there is a real pleasure that comes from watching him draw the contours of his own knowledge.

All of this raises some legitimate questions, however: For whom exactly is this essay meant? And who is qualified to evaluate it? Steiner’s reliance on allusions to a vast array of sources places a heavy burden on a reader who has no recourse to a glossary, explanation or even translation. Steiner simply assumes his readers are as well versed in his sources as he is, and in their original languages. But is this a fair assumption? How much of a work’s value lies in its accessibility to readers? Such questions either do not concern or do not occur to George Steiner.

Finally, there’s the issue of Steiner’s own prose. There are moments when he’s capable of producing some real epigrammatic gems. Of our attempts to make sense of the world through the ephemeral tool of language, Steiner writes, “The muteness of animals remains vestigial in us. We attain our uncertain humanity via speech acts, born of our rootlessness.” Elsewhere, he claims, “the unison of poetry, music and metaphysics continues to haunt philosophy like a fraternal ghost … at their highest reach these pursuits share an enormity of uselessness.” In these moments, “The Poetry of Thought” serves as a set of beautifully written liner notes for the Western canon.

But for every lovely, epigrammatic turn, there’s an impossibly dense and jargon-laden block about “Hölderlin’s philosophic-hermeneutic exegesis of Sophocles,” or “the fascination of the ‘interface’ between the philosophic and the poetic.” In these passages, Steiner is less a poet or philosopher than a turgid academic. He neither reinvents language, like poetry should, nor does he clarify it the way he claims philosophy does. This isn’t to criticize Steiner unduly — his is a venial sin among academics. But in an essay that examines the “synaptic contacts between philosophic argument and literary expression,” such cumbersome prose actually undermines his argument.