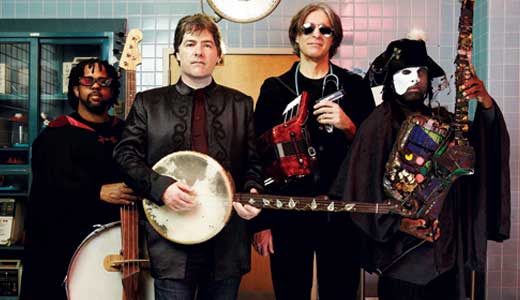 Bela Fleck has had one of the most diverse and interesting careers of anyone in music. Starting out in the bluegrass world, he has since conquered classical and jazz, dabbled in various fusions, and most recently explored the historical ties of his banjo to its African origins via his Throw Down Your Heart album. About the only pairings he hasn’t made room for — to date — include explorations of the banjo and roots sounds to early gospel and soul of the American South, and an obligatory T-Pain remix.

Best known for his work with his Flecktones lineup, their work has been sporadic while Fleck follows his muse across the spectrum. His Louisville date marks the last show of this latest reunion tour before he expands the production of his banjo concerto, which he premiered last year with the Nashville Symphony. That concerto has been recorded and filmed for a future release, and expect a couple of new collaborations to appear imminently. Having lived such a charmed life has made Fleck as laid back and comfortable in his skin (and coifs) as anyone could ever hope to be, as can be read in LEO’s brief exchange with the man:

LEO: What will be the most lasting effect of your Throw Down Your Heart project and African trip?

Bela Fleck: My awareness of the world was enhanced tremendously, and I hope that never changes. I have high hopes that the musical influences will stick, too, but it’s hard to tell what’s what.

LEO: I was shocked to see the Additional Tracks collection from the Throw Down Your Heart sessions on your website. With the sheer volume of your output, what kind of vault of unreleased material are we looking at?

BF: There are quite a few tours over the years that were recorded, but I don’t have a ton of studio recordings that were not released. I tend to get them on out.

LEO: You hold a special place in Grammy history — is there a Grammy that means a little more than the others?

BF: The Grammy for Best Mullet In Jazz Fusion has got to be my favorite. That was in the early ’90s. Now I hope to win Best Buzzcut In Classical Crossover; we shall see — please cross your fingers for me.

LEO: What’s your first reaction when someone mentions the word “genre” to you?

BF: I usually say “gesundheit.” Actually, I don’t have any issues with the idea of different genres and what they offer in terms of structure, and sometimes I really enjoy playing in a particular style. But a lot of the fun is in poking at the edges of styles and seeing what happens.

LEO: The classical and world records notwithstanding, what’s the key creative difference in plotting a Bela Fleck record versus a Flecktones record? How often do you “hold back” certain compositions while in collaboration mode?

BF: Sometimes I play a piece that I really love for everyone, and nobody gets excited. Then I play it for a different set of musicians, and they flip for it. So I have learned to be patient and wait for each song to have its time.

LEO: The Louisville date is scheduled as the last Flecktone date with the original members before going back on “hiatus.” Anything in store for this particular swan song?

BF: It’s too late to grow my mullet back, but maybe hair extensions? It’ll be an emotional night, the end of an incredible year together. But I doubt it’ll be the end of the band. It’ll likely be several years, but I think we will fly again.

LEO: Whom haven’t you collaborated with yet that you’d like to?

BF: My next collab is with Marcus Roberts, who is one of my favorite jazz artists. We have a release coming out in June. Also, I am doing things with classical musicians, such as my banjo concerto, which I will be playing quite a bit in the next few years. I want to make a duo album with Abigail Washburn, who is my wife! Lucky me …