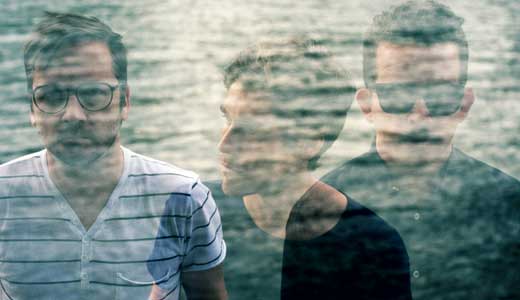 Bear In Heaven’s members live in New York now, but all grew up in the South. Drummer Joe Stickney grew up in Alabama — he’s so Southern, his mom was in a book club with Jimmy Buffett’s mom. LEO spoke with him from the band’s rehearsal space in New York on the eve of their current tour.

Bear In Heaven’s third album, I Love You, It’s Cool, was released two weeks ago to positive reviews, part of an organic evolution the band has gone through from an arty rock group to a more overtly dance-based electro-pop group. The band also gained attention for how they previewed the album online, slowing it down 400,000 percent for streaming — the intended pop heard as 2,700 nonstop hours of drone — that played out between December and early April, as a “comment on the current state of album promotion, hype cycles, countdowns and all the marketing ploys that we accept as a reality of existing within an Internet age.”

LEO: The new album has a very 1980s European feel, and you told someone that you weren’t “feeling as testosterone-y” this time out.

Joe Stickney: Yeah, yeah! I think we all would agree with that. We’re not, like, a bunch of super testosterone-y dudes; I mean, we like college football, but we’re not aggro people. I think the last record definitely had a lot of heavier, cathartic … this one is coming from a more low-key place.

JS: I just mean, like, low-key emotionally. It’s not coming out of a tempest of crazy emotions. I feel like it’s pretty calm. It’s upbeat, for sure, but I think it’s calm in the overall emotional content.

JS: Well, that has yet to become easy (laughs). I think it definitely comes from where we’re at, at this point. We all came to better terms with everybody’s roles in the band, how we can make things work more smoothly. We’re all working together as a good team at this point, and it’s pretty smooth — you hit snags, but it’s pretty smooth sailing so far. I think that definitely is going to influence the kind of stuff you’re doing.

LEO: How’s the live show going to look this time out?

JS: We’re trying to amp up the whole synesthetic experience, have the lights and the music play off the way — where they create a greater whole than the sum of their parts. You know the end of (the movie) “2001: A Space Odyssey”? If you just listen to the music, it’s great; if you just look at the visuals, it’s great. The combination of that is, “Holy shit!” Your mind’s blowing. We’re hopefully going to be able to achieve something like that … Hopefully everything works together to make an experience that you can’t get just from the record. That’s the idea — the live show should be something different, but equally stimulating to the record. If you just get up there and play the songs exactly like the record, it’s like, “OK, well, that was louder than my stereo can play … and I got to watch the people doin’ it. Other than that, it’s not very interesting.” We want to try and bring a little bit more.

LEO: Speaking of visuals, the video you guys did for the new song “The Reflection of You” made me dizzy.

JS: A lot of people have that reaction! Personally, it doesn’t really affect me in that way, but I’ve got pretty solid equilibrium, I think (laughs) … I think it’s great. I love hearing people’s reactions to it, too, because the reactions are definitely extreme, in both directions. There’s not a lot of people who feel lukewarm about it. I’ll take that.