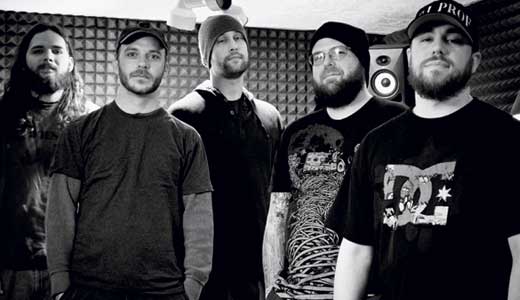 Corey Profumo is an actual person. That he is a person who actually raps is interesting, because he doesn’t fit the usual facades and imagery of rap these days. Partnering with producers and turntablists MacaDamien and Calcutta, guitarist Jake Kicklighter, and bassist Richard Herrell, Profumo, who operates under almost his actual name, CJ Prof, knew early on that he wanted to front a live band. “(Calcutta’s) house was like a commune for musicians for a while. People would just come over, and I knew something was going to happen.” They started experimenting in 2006 but hadn’t found their sound until recording off and on for a couple years. Their debut album, Look Harder, is coming April 20, and is the result of two and a half years of work.

Asked to describe their sound and influences, Prof instantly namechecks LL Cool J as an early inspiration. “I used to play sports as a kid, and I would fake being hurt just so I could sit on the sidelines and listen to ‘Mama Said Knock You Out’ on my Walkman,” he says. Herrell, who also produces under the moniker Filthy Rich for Hippiedigger, Murk-A-Troid, and on a recent EP with Polio, reaches equally far back, nodding to Rick Rubin’s production for Beastie Boys and other early Def Jam acts, as well as later work by Trent Reznor’s Nine Inch Nails and with Saul Williams. Herrell speaks up to compare his frontman to Rage Against the Machine’s Zach de la Rocha, but both are quick to distance their work from the “conscious” label. “I’m definitely highly opinionated about society, about the hip-hop community,” he says. “I don’t want to come off as preachy, but I do have that attitude: Put me on my soap box and let me talk for a while. I’ve got some things to say.”