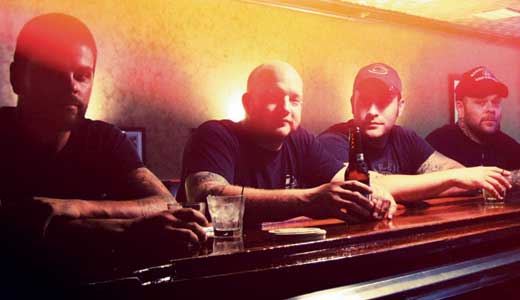 The Dammit — that’s two Ms, no N — are a “swamp boogie” band who remember that music should be fun first. The veterans of several bands over the past 15 years are now celebrating the release of their first full-length album, playing Cahoots Saturday night with a promise of “free beer (while supplies last) when The Dammit starts their set!!” The evening begins at 9 p.m. Singer/guitarist Brian Leonard discusses their “ass-kickin’, boot-stompin’ good time” music with LEO.

LEO: The band calls its sound “swamp boogie.” What does that mean to you?

LEO: What have you all learned from past bands?

BL: Keep it simple. Over-thinking ruins everything. It twists things around, makes you worry, and makes everything seem a lot worse than it really is. Age and bourbon has helped us a great deal with that.

LEO: How does The Dammit fit into the modern music world?

BL: We have a tremendous amount of respect for modern bands and how hard they work for their success, but no one is really doing what we’re doing. We don’t know if that’s a good thing or a bad thing; it’s just what we do. We were raised on the classics — artists like Waylon Jennings, R.L. Burnside, ZZ Top, Prince, and Hank Jr., to name just a few. I think the best way for us to contribute is to remind the modern music world how great the classic sounds make you feel.

LEO: What can Louisville expect from your live show?

BL: Our shows are typically a haze by the next day. We remember people dancing and screaming, but everything else gets lost in the fog. We just do what we love, and people tend to join in. We’re a four-person party with an open invitation.

Read your invitation at reverbnation.com/thedammit.