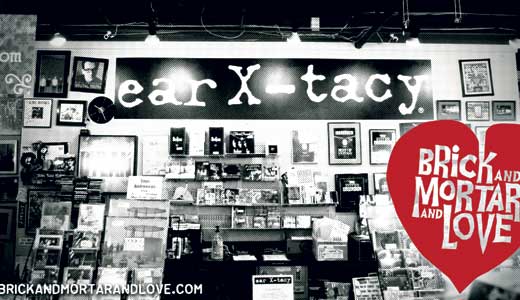 Scott Shuffitt is known as a co-founder of Lebowski Fest, but he’s also a filmmaker. His documentary about the struggles faced by ear X-tacy and other record stores in the digital age, “Brick and Mortar and Love,” premieres at the Louisville Science Center on Friday, April 7, at 7 p.m.

LEO: How has ear X-tacy influenced your life?

Scott Shuffitt: The first time I went into ear X-tacy, I was totally blown away. I had never seen anything like it — there was so much cool stuff to take in. I used to consign T-shirts there in my 20s. It’s where I learned about Elvis Costello and the Budos Band, and I miss it.

LEO: How much was (owner) John Timmons willing to open up about the struggles as they were ongoing?

SS: I feel he was very open to me; even when he was getting nailed with comments on the Internet and a lot of people would have taken shelter, he still let me in. I can’t think of one time when he denied me access or didn’t answer a question during an interview.

LEO: Did employees fully know what was happening? Or did they just talk to you about their feelings about ear X-tacy and record stores in general?

SS: Just like with any business, some employees knew more than others, but most of my questions were about how they felt, and what they thought the future would look like for the store and what they were doing to work out this situation.

LEO: What do you think is the future of record stores? How will they look in 10 years?

SS: This is a question I asked a lot of folks while filming, and I don’t know if I ever got the answer I wanted. For some record stores, things aren’t going to change much. There will certainly be more really great shops that will close, but, at the same time, new shops are opening and bringing new and fresh ideas. Old or new, they have to be on their A-game if they are going to stay open.