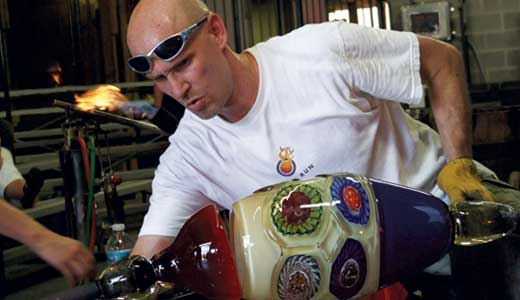 Color me surprised to learn that the Flame Run Glass Studio and Gallery is moving into the Glassworks building at 815 W. Market St. As someone who was a consultant for Glassworks prior to the building’s opening in 2001 (I was the content advisor on the in-house video), I knew the less-than-pleasant feelings that glass artist Brook F. White Jr. had when he left Glassworks two years later. His departure eventually led him to open Flame Run. So I was happy to accommodate White and manager Tiffany Ackerman when they asked me to meet at Glassworks so they could tell me how this all came about.

Brook White: We met here over 10 years ago.
LEO: And now you’re back.
BW: Yeah, it’s a curious thing.

LEO: And how did that happen, exactly?
BW: My former father-in-law owns the (Flame Run) building at (828 E.) Market St. My lease was up on March 31, so I’d been looking at buildings in downtown for about a year. Downtown Development Corp. had been helping me.

Bill Weyland (of CITY Properties Group and the owner of Glassworks) came to Flame Run in October. I hadn’t talked to him for eight years; it was a tense situation when we left years ago. He said to me, “I hear you have a landlord problem — I have tenant problems.” We had a five-minute conversation by the door of my car, and I walked away thinking, “Did that just happen?”

I let it roll around for about a week. I didn’t want to make a bad decision because of my pride — it was a really good business opportunity. The (2010 Glass Art Society) conference two years ago mended some bridges. Eventually I thought of it as a godsend and signed the lease two days before Christmas.

LEO: Since you’re moving in now, how long before you reopen?
Tiffany Ackerman: Flame Run closed its retail and gallery on March 20.
BW: And someone bought a piece (while we were moving in) on the same day.

LEO: So you’re open?
TA: The gallery opened on Saturday (March 24). Not sure when the official opening is yet (a later email states the grand reopening will be on Saturday, May 19). We’ll be called Flame Run at Glassworks.
BW: We won’t have full control of the hot shop till mid-April. Flame Run has twice as much equipment than Casey (Hyland, former head of Glassworks’ hotshop) has. Normally we would have to re-pipe, but not here.

LEO: Are the Flame Run artists moving as well?
TA: All the studio artists are coming over, so the team is staying the same.

LEO: One aspect of Glassworks that is different is that it offers tours, so people can watch artists working in a variety of glass. Are you still going to do that?
BW: Mark (Payton, long-time Glassworks flameworker) is taking over tours and the walk-in workshop.
TA: We’re determined to keep our open-door policy. We’re happy to be a Louisville destination, but we really want to stress that we intend to retain our focus on high-quality glass art. I think the hardest part of moving into the old Glassworks space will be maintaining everything that Flame Run is.
BW: I agree with Tiffany … that we’re bringing our “Flame Run vibe” to the Glassworks building. If we can share our love of glass with students, tourists or serious art collectors, we will be happy to do so.