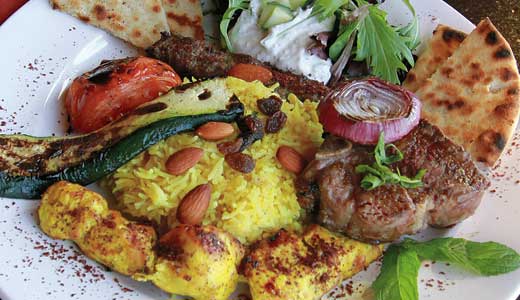 Photo by Ron Jasin (of The Grape Leaf's mixed grill)

To catch up with a bunch of items that have piled up in my critic’s notebook, let’s take a quick trip around the world on a dinner plate, stopping off at a trio of worthy spots for tastes of the Mediterranean, Korea and a Philadelphia treat — a surprisingly fetching “cheeze” “steak” that’s fully vegan.

•Sampling the samplers at The Grape Leaf

Let’s begin at The Grape Leaf, a popular spot in Clifton that combines a comfortable setting with one of the more attractive patios in its neighborhood. If you’re in the mood for Greek, you’ll find it here; ditto for most of the familiar favorites of Middle Eastern cuisine. And if you’re feeling contrarian, you can even scare up a tostada, a breakfast burrito or even a good old American stack of pancakes.

Indeed, the menu is almost as extensive as that at Ramsi’s (LEO Weekly, Jan. 18) — and hints at a similar world-spanning bill of fare — but stays closer to its core Mediterranean competency. That’s a good thing.

You’ll find more than a dozen appetizers, soups and salads, from $7.25 (for grape leaves stuffed with veggies and rice) to $8.95 (for an avocado-topped chef-style salad). I counted 25 breakfast and brunch choices (topping out at $14.50 for Paul’s Choice, grilled beef tenderloin or lamb with scrambled eggs, avocado dip, salsa, pinto beans and tortilla chips). There are about 18 lunch items, divided between the vegetarian and the meaty. Dinners? Take your pick among vegetarian, regular, à la carte and “signature specials.” There appear to be more than 100 choices here, all under $20.

Here’s a tricky way to get a lot of variety on your plate without having to wrestle with choices: Go for the samplers. The veggie combo ($13.50) brings together a pair of crunchy falafel; silken chickpea hummus; eggplant baba ghanouj; spanakopita, or Greek-style spinach-and-phyllo turnovers; and a simple salad. Nabil’s Mixed Grill ($17.95), a celebration of meat, unites ground-lamb kufta, a lamb chop, and your pick of chicken or lamb kabob, all attractively assembled on a bed of rice.

I’m not sure the trend is strong enough to justify declaring Korean cuisine the next big thing in the Metro, but those of us who enjoy this robust, often spicy Asian fare aren’t complaining about the recent arrival of two new spots on the eastern side of town. You read about Charim Korean in the March 21 LEO Weekly. How does Soora Korean stack up? Very well, thank you.

Soora is the latest occupant of a former fast-food joint on the short end of Goose Creek, just south of Westport Road. It’s a worthy successor to the lamented Perla del Pacifico and Istanbul Palace, offering a good selection of Korean standards in tidy surroundings.

Bibimbap (pronounced “bee-bim-bop”) is a standard Korean dish, a selection of lots of goodies artistically arranged over rice in a big bowl. Admire it, then stir like crazy to mix it all together, and enjoy. We tried it two ways: Straight up ($11.99), it’s topped with shredded daikon radish, carrots, bean sprouts, wilted greens, and edible seaweed, arranged over rice with an over-easy egg and bite-size bits of marinated beef. Dotsot bibimbap ($12.99) comes in a sizzling hot, black stone bowl, with fried tofu in place of beef, and a raw egg yolk that cooks into a sauce when you stir it in. Take your pick. You can’t lose with either.

In Philadelphia, lovers of the traditional cheesesteak learn to order this regional delicacy “wit’” or “wit’out” … with or without fried onions.

Most carnivores visualize vegan cuisine as a monotonous matter of sticks, seeds and twigs, but Chase proves otherwise, fashioning a variety of remarkably delicious dishes that even the most sharp-fanged meat-eater has to declare delicious. Vegan bánh mì with “hot dogs”? Check. Vegan chorizo? Got it. Vegan jerky? Coming right up!

Still, you might think that turning a Philly cheesesteak into a vegan treat using neither steak nor cheese would be a step too far. Wrong! Dark, juicy shreds of “beef” are based on savory marinated soy. Daiya “mozzarella,” a vegan brand, contains no dairy. Faux “Cheez Whiz” gets its kick from two kinds of mustard plus vinegar. Pickles, wit’ green peppers and onions, are all natural, as is the flour tortilla that wraps it. Zap it in a toaster oven or panini grill until the cheeze melts and you’d swear you were dining in Philly. It’s $6.59 plus tax at Heine’s.