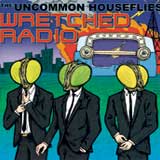 The Uncommon Houseflies’ new album parodies radio broadcasting (and its importance in society) across generations. The lead-in and fade-out blips, “Station Identification” and “Sign Off,” reinforce the “station marketing” in the title song, the effect of which is to create a strongly themed album. The band explores rock music from across the decades from 1950s pre-Beatles influences to a modern, yet lo-fi, Porcupine Tree-like metal haze. Traversing all these genres, singer (and LEO columnist) Kevin Gibson’s familiar voice carries the listener through gap after treacherous gap without faltering. Combined with the quirky true stories that inspired the lyrics — “Border Disorder” is about getting kicked out of Canada, “Commando for Jesus” is about a kid who gave up underwear for Lent — the record’s realism is a refreshing hiatus from an industry that tends to take itself too seriously.