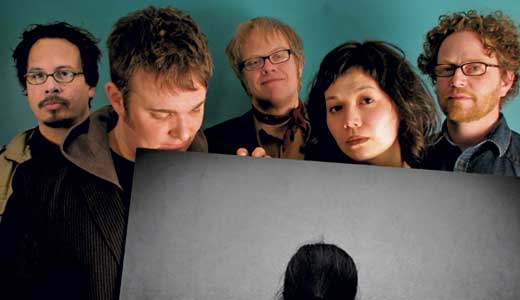 Winterpills, a melodic, sometimes ethereal chamber pop/indie rock band based in Northampton, Mass., is led by a married couple, singer/guitarist Philip Price and singer/keyboardist Flora Reed. Their fifth full-length album, All My Lovely Goners, was released on Valentine’s Day. Price and Reed stop over in Louisville for a duo show after shaking their sticks at the South by Southwest conference in Texas.

LEO: How many times have you gone to South by Southwest?

Philip Price: This is the third or fourth time, I think. We took a couple years off because … I don’t know, too many tacos, I guess (laughs).

LEO: So, you have a new record out now. Do you have any fun stories about making it?

PP: Well, we did it all at home. We spent a couple years putting together a studio in our house — which, by studio standards, is still pretty minimal and home-cooked, but for us seems awesome. The main investments being an amazing microphone and a great tube pre-amp, and we just kind of ran everything through that. That made all the difference.

The songs were almost all written three years ago — after our last album, and even before that EP we put out in 2010. The band had a brief lull where, I think, we were trying to reassess what was going on. Not that anything horrible had happened — it was a period of uncertainty that lasted a year. Just all of us heading in slightly different directions for a while … There were weddings, people having babies, a couple band members moving further away …

There was a period where I was trying to figure out if the next thing was a solo record or … I wrote all these songs, toured that, and then after it was all written and demoed, I realize they were pretty much exactly songs for Winterpills to play (laughs). To call it a solo record, it really needs to be saying something different, and it wasn’t. It really felt like, “Wow, this is actually the next step for the band.”

It’s a long evolution for me, as a songwriter, to make music that isn’t, you know, bullshit. I’m also not, like, a plain-spoken songwriter. “Bullshit,” to me, doesn’t mean purely minimal, it means something much more ornate. Or baroque, even.

PP: I would call this one more elaborate arrangements … Certain decisions were made that were a little more complicated. Our first record was a very minimal affair, and I don’t think we’ve completely let go of that, and we can go back to that, but there is some kind of shift going on … (laughs) I don’t know what I’m talking about …

LEO: How much of that music came from your own writing and arranging, and how much of it became collaborative?

PP: I would say pretty much 50/50, but I was writing differently — partly, having listened to too much prog rock when I was a kid, I ended up writing songs like (adopts silly voice) “It’s a concept album! Oh, I see how the songs are linked!” I couldn’t not make links between the songs and some sort of overarching meaning. That was inherent in the songwriting, this theme of maybe war, or people dealing years beyond after tremendous losses occurred, almost some kind of emotional reconstruction era-thing going on … but then, a lot of these came to the band, and they definitely changed.

We had a lot of rehearsals where we tried to make decisions for the band that would stick for live shows. I think a lot of songs would sound good in the studio, and then we found that we couldn’t really play them live, and still haven’t played. We were like, “We want to be able to play all these songs!” (laughs) I just broke a drumstick, I was gesticulating wildly.

So, that was our goal with those rehearsals, and a lot of shit happened during those rehearsals; I got mad because they were changing the songs too much, and then I went back and realized, “Oh my god, this is so much better.” We ended up keeping a lot of that, a lot of the oddness.