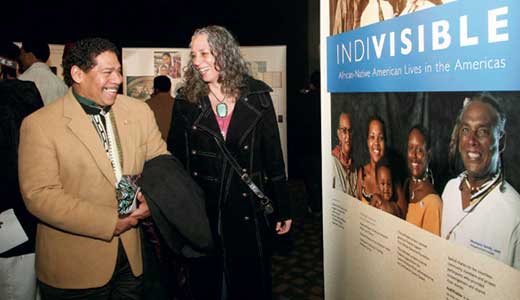 Your grade-school teacher may have called this nation a melting pot, a place where cultures mingle and meld. That’s precisely the phenomenon that gave rise to the Smithsonian traveling exhibit “IndiVisible: African-Native American Lives in the Americas,” now on display at the Muhammad Ali Center on the boxing legend’s 70th birthday.

The notion of “being ethnic” is something that is often overlooked. Marcel Parent, the Ali Center’s senior director of guest services and programming, reminds visitors that this is likely because “we all come from so many countries and so many ethnic backgrounds and so many religions. What are you going to do, say that this arm is Protestant and the other three limbs are Catholic?” The divisions between the parts of our whole simply aren’t there.

This exhibit looks specifically at people who share American Indian and African-American ancestries. Though it may sound a bit obscure, this particular mixed heritage is believed to be more prevalent today than Native American.

One Louisvillian with this ethnic background is state Rep. Reginald Meeks, who says he finds a special significance in the exhibit. “It inspires individuals and families … to search each other out — to talk about that which has been kept quiet for too long. And it makes those of us who honor and celebrate the whole of our ancestry, heritage and future proud to be watching others begin to do the same.”

It isn’t the most interactive exhibit at the very hands-on Muhammad Ali Center — it’s composed completely of historical panels — but it is worth checking out. Readers take a comprehensive journey through the history of African-Native American individuals in this country. While this setup may seem somewhat impersonal, there’s been a profusion of inventive programming centered around these two hallways’ worth of reading.

One special Ali Center effort to engage visitors is to invite local families of both African-American and Native American heritage to submit their stories (in 250-1,000 words) to [email protected] by March 27 for preservation in the center’s archives. Five to eight of these stories will be shared orally during the “Untold Stories” program.