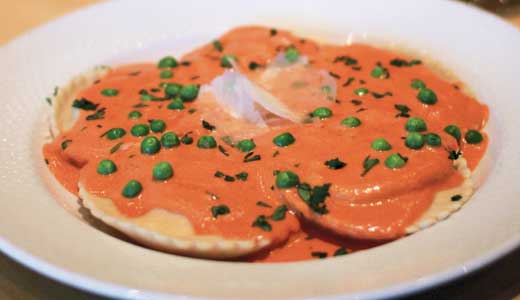 Volare, oh oh … Cantare, oh oh oh oh … Let’s fly way up to the clouds … With Dean Martin’s classic rendition of the pop Italian ballad firmly planted in our ears, let’s talk about Volare and how it fits into the pantheon of Louisville’s top Italian tables.

It’s all connected, after all, and goes back to the 1970s, when, for a century or more, “Italian” food had meant the hearty, tomato-sauced American-immigrant fare that families brought through Ellis Island from Calabria and Sicily, Italy’s poverty-ridden deep south. Spaghetti and meatballs, for example, and ravioli, and maybe some veal parm-mee-jun, made, of course, with grated cheese from the green can. That was Italian eats in those days, and most of us loved it; and we washed it down with Chianti from a wicker-wrapped bottle that could be repurposed as a candlestick.

In the 1970s, though, something new came to town, delivered by the fabled Casa Grisanti, a local spot that had already built a reputation for, well, spaghetti and meatballs and pizza. One day they painted over the huge mural map of sunny Italy that had covered one wall, ditched the red-checked tablecloths, nailed shut the drive-by pizza window, and switched over to a newly trendy menu of not-so-red dishes that gained the not-quite-accurate moniker “northern” Italian to distinguish them from the traditional southern Italian stuff.

Northern Italian became trendy, and it became upscale and expensive, with top-end menu prices, heady markups on Italian wines that didn’t come in wicker baskets, and little tricks like upcharges for veggies and sides to push the tab up to levels not previously seen hereabouts. And to make us like it, they surrounded it with a tux-clad mystique that featured suave, sycophantic hosts and servers who treated you as if you had been recognized as a restaurant critic even if you weren’t.

The public embraced the idea, and Casa Grisanti soared. Although it closed in 1991, it spawned a school of offspring: Vincenzo’s came in the ’80s, Porcini in the ’90s, Volare popped up in the early 2000s, and Mozz came along in 2010. In general, they featured Grisanti graduates in the kitchen and dining room, and offered similar formulas: classy venue, upscale pricing, attentive service and, most important, well-wrought authentic regional fare from all over Italy, not just “northern” or “southern.”

At this point, I’m inclined to declare Volare tops in the local genre. Tarek Hamada inherited Majid Ghavami’s deft touch as host, and with Chef Joshua Moore — who’s worked at both Vincenzo’s and Porcini — in the kitchen, all the elements for success are present. (Ghavami, also a Casa Grisanti alumnus, now runs Majid’s. He remains one of Volare’s owners but is no longer in management.)

Mary and I joined four neighbors for an indulgent dinner at Volare, and we enjoyed a near-flawless experience. I’m no fan of obsequious service, and after some early hyper-attentiveness, service settled down to polite, not overbearing care for the rest of the meal.

Volare’s menu offers a half-dozen meal-size pasta plates from $17 to $25 and about 10 Piatti Principali (main dishes) from $18 to $36, plus high-end steaks from $26 to $39. An appealing group of cicchetti (small plates and flatbread pizzas) is available at the bar from $4 to $9, and, our server said, could be ordered for table service, too.

After ample baskets of warm, freshly baked Italian bread and garlic oil, we dived right into an impressive appetizer, rotollini di melanzane ($9). Thin slices of earthy eggplant were wrapped around creamy ricotta cheese to make three plump rolls, baked and plated on a deep red tomato sauce decorated with concentric circles of balsamic and a sprig of fresh basil. It was almost too pretty to eat, but too delicious not to. The same goes for the Inverno (“spring”) salad ($8), featuring beet greens and sliced beets, goat cheese and walnuts in a honey-balsamic dressing.

A lamb shank ($24) braised to butter-tenderness was cloaked in a rich white wine and lemon sauce, served over creamy polenta with parsnips and broccoli florets and a side of sautéed spinach ($4).

Ravioli in vodka sauce ($18) was a winner, too, a colorful plate of five round ravioli stuffed with ricotta, coated with a creamy reddish-orange tomato sauce and topped with bright green peas.

A spectacularly plated panna cotta dessert — too delicate to be described as “cream jello” — put an exclamation point on the meal. Our fellow diners had nothing but praise for the roast duck ($28), frutti di mare seafood pasta ($25), chicken Fra Diavolo ($21), and a cappesante sea-scallop-and-prosciutto app as a light entree ($15).

Our dinner for two, including two glasses of Italian red wine, was $94.34.