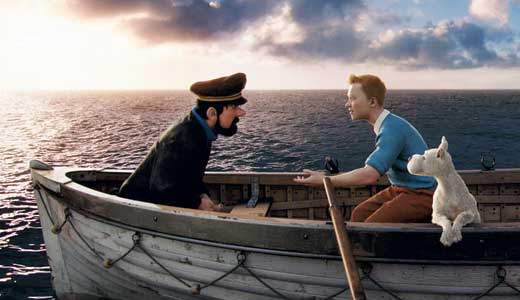 The original “Happy Feet” was that rarest of all family flicks: lively enough for the ankle-biters, but smart enough for adults, too. This sequel is aimed more at kids, but still features those fabulous digital landscapes that brought the first one to life. Here, Mumble, the tap-dancing penguin, becomes a dad, but his little Erik is afraid to dance — he wants to fly! With voice work by Elijah Wood, Pink, Hank Azaria and, as a pair of adventurous krill, Brad Pitt and Matt Damon.

THE ADVENTURES OF TINTIN

For the uninitiated: Tintin is the world’s best-known comic-strip character. Created by Belgian artist Hergé in the late ’20s and bound into “albums” (precursors to the graphic novel) in the 1950s, Tintin’s adventures have been reprinted in more than 50 languages and have sold more than 200 million copies. Furthermore, his daring adventures were the inspiration for the early cliffhanger movie serials and the over-the-top action-adventures that men like Steven Spielberg and Peter Jackson have built their careers on. Now the two are repaying the favor by bringing young reporter Tintin, his dog, Snowy, and their friends to the big screen using digital animation and motion-capture techniques. Any synopsis of the movie at this point would be superfluous: Just buy it and thank us later.

Clearly inspired by the work of Michael Moore, filmmaker Jeb Berrier undertakes a personal journey to discover what really happens to all those plastic bags that supermarkets say they “recycle.” Entertaining as hell, but you’ll never again look at a plastic bag without gagging. Our highest recommendation.

George Clooney co-stars alongside the awesome beauty of the Hawaiian Islands in this Oscar-winning family drama/chick-flick. He plays a butthole/land developer who gathers his two estranged daughters and heads out to find the lover of his unfaithful wife, who’s been left comatose in a boating accident. While the scenery and soundtrack — all Hawaiian and all magical — simply could not be more mesmerizing, this is an actor’s movie, with Clooney front and center in nearly every scene. Lovely Shailene Woodley holds her own as the elder daughter.

Better known as “House of Tolerance” or “L’Apollonide (Souvenirs de la maison close),” this documentary-like drama records daily life in a turn-of-the-century French bordello, focusing on the way the women support and comfort each other — to a point. Lots of nudity but little eroticism: The women are beautiful but hard — one of them has a smile-shaped scar cut into her face — and are little more than slaves to their own internal society.

IN THEIR OWN WORDS

Wow! This is one of the best historical series we’ve ever seen, and for one simple reason: It’s nothing but great, long-dead British novelists, thinkers, scientists and public figures speaking candidly about the world from all-but-unknown museum recordings. Like who? How about J.R.R. Tolkien, George “1984” Orwell and Sigmund Freud?! These and dozens of others are revealed in rare and priceless recordings from this BBC series.

Be warned: Crazed filmmaker Lars von Trier (“Antichrist”) is at it again. This time, Charlotte Gainsbourg and Kiefer Sutherland are hosting the wedding of sister Kirsten Dunst to Alexander Skarsgård at their lovely country estate. In attendance are their friends, employers and parents (Stellan Skarsgård, Charlotte Rampling, John Hurt, etc). Overhead, an unknown planet hurtles toward Earth. That’s when Kirsten loses her freakin’ mind and runs screaming into the house, telling everyone to go away. It gets real Bergman-esque from there.

MY WEEK WITH MARILYN

This bio-drama, based on a few days in the life of Marilyn Monroe (immediately after her marriage to playwright Arthur Miller, as she filmed “The Prince and the Showgirl” with Laurence Olivier) is a Ph.D. class in how to make a movie. Michelle Williams’ performance as Marilyn is, in and of itself, worth the price of admission as she literally becomes Monroe — not as a bouncy caricature, but as a living, breathing, flesh and blood force of nature. We could scarcely breathe while she was on the screen. To say more would spoil the fun. Just buy it.

THE KILLING: SEASON ONE

Cable’s AMC has struck paydirt with this gritty police procedural based on a popular Danish series from 2007. Mireille Enos stars as a retiring police detective who postpones her new life when a girl’s bloody sweater is found. Then the girl’s body shows up in a car at the bottom of a lake — a car with ties to a powerful mayoral candidate. A real smoker; don’t miss it. BTW: The dead girl is played in flashbacks by Kate Findlay, whose provocative face has graced TV shows from “Fringe” to “Stargate SGU.”

OK, right up front: This is the dumbest take on the Three Musketeers we ever saw. It’s incredibly entertaining, owing more to the new “Sherlock Holmes” series than Dumas’ tale, but it’s still dumb. Matthew Macfadyen, Luke Evans and Ray Stevenson play the famous swordsmen, with Logan Lerman as d’Artagnan and Orlando Bloom as the Duke of Buckingham. But the best thing about the movie is Milla Jovovich as a deadly, acrobatic Milady de Winter — just one corset away from her role as Alice in “Resident Evil.” Trust us, this is a hoot.

If you haven’t heard about this terrific little BBC series from the people who bring you “Shaun the Sheep,” you are really missing out! Hapless inventor Wallace and his trusty dog Gromit give kids a look at seriously cool real-world inventions — plus a few of their own Rube Goldberg contraptions — to inspire them to come up with their own creations! Six episodes, direct from their basement studio at 62 W. Wallaby St. A must-own.

Written by Diablo Cody (“Juno”) and performed to perfection by the always-amazing Charlize Theron, this dark look at life ranks as one of the best adult re-coming-of-age dramas we’ve ever seen. Theron is a former high school beauty queen, now divorced, angry and back in her small hometown in hopes of picking up where she left off with her then-boyfriend. But the world has moved on for everyone but her; she’s just too clueless to see it. Painfully funny at times and always fascinating, it co-stars Patton Oswalt, who is surprisingly good. Recommended.