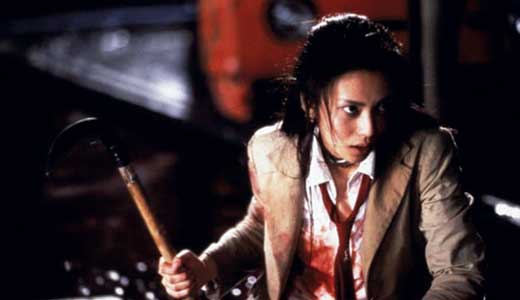 While it’s not our usual bailiwick, we simply must tell you about Sinister Cinema’s new line of pulp fiction. Our buddy Greg Luce (see FilmFax No. 129) is producing exceptional quality reprints from some of the greatest names in classic-age sci-fi and horror, and in their best form: head-to-foot double-sided pulp novels! Then he wraps them in carefully restored cover art rescued from back in the day. At only $12.95 each, you won’t find a better way to maim your brain. Available only at sinistercinema.com (click Shop>Armchair Fiction). And tell all those Kindle junkies they can suck on it.

Every so often we come across a title that we actually feel pride in announcing; this is one such title. Set in the near future where society and economies have collapsed (sound familiar?), the Japanese government institutes the BR Law. To quiet rebellious youth, it endorses an annual fight to the death by one class of ninth graders. The children are fitted with exploding collars, given weapons and dropped onto a remote island where only one will survive. A “Lord of the Flies” for the 21st century, now available for the first time in America. Enjoy. (Also available in a Complete Collection featuring several special cuts of the movie, plus the sequel for $33.98-$36.98.)

We absolutely LOVED this movie! A pair of kids, one a bully, have a fight at school. The victim’s parents invite the bully’s parents to their home to discuss the issue as polite rational adults. Of course, the parents are ultimately no better than their kids, and it all goes to hell in short order. And what a cast!: Kate Winslet, Christoph Waltz, Jodie Foster and John C. Reilly. Great stuff.

EATING OUT: THE OPEN WEEKEND

The “Eating Out” franchise has become the most successful series of gay movies thanks to a simple formula. In this one, the fourth so far, a pair of adventurous lovers head for a Palm Springs resort to meat new people. But when one hooks up with an old beau, the other feels pressured into something he’s not comfortable with. So he asks a straight friend to pretend to be his hookup for the duration, leading to romantic complications.

This goofy German titty flick is a grand guilty pleasure of ours. Originally “She Devils of the SS” (“Eine Armee Gretchen”), we are shown the intimate final days of WWII, where beautiful young girls from all over Germany are volunteering to serve on the front lines — by having constant, non-stop sex with their brave fighting men! And then each other! The “young girls” are often neither, but they are attractive, give it their all, and keep the whole affair lighthearted and breezy, though there is also heavy drama, good special effects, lots of explosions — and the Nazis are the good guys! Wonderfully entertaining trash from back in The Day.

A fine little charmer from Italy. Two down-on-their-luck circus performers living in a run-down trailer park become reluctant surrogate parents to a 2-year-old foundling with help from a 14-year-old neighbor boy. If we said it will melt your heart, you would assume we were just spouting hyperbole. We’re not. It will melt your heart. (Note: Contains one scene of simulated animal abuse, necessary to the plot.)

MY LIVING DOLL: THE OFFICIAL COLLECTION VOLUME ONE

Julie Newmar (who made a hot Catwoman in days gone by) plays a stunningly beautiful robot in this classic early-’60s chestnut opposite swinging super-bachelor Bob Cummings. The whole thing was a crazy excuse for wrapping Newmar in inappropriate clothing and spawning embarrassing situations while his horndog neighbor (character vet Jack Mullaney) schemed to get her into bed. Not seen on TV in a generation and first time on DVD; comes with a nice collection of bonus goodies. Recommended.

Lovely Holly Weston (“Hollyoaks”), a troubled “teen,” finds herself trapped in an abandoned building. But she is not alone. From the skylight a stranger watches; more animal than man, it revels in her screams of terror. Then Stephen Walters (“Skins”) stumbles upon her prison and, while the creature is now held at bay, the man can’t — or won’t — let her leave. A high-concept/no-budget indie chiller with an attractive cast.

THE GIRL WITH THE DRAGON TATTOO

Daniel Craig easily inhabits the role of the disgraced journalist who agrees to hide away and research an old, unsolved murder for wealthy industrialist Christopher Plummer. And, likewise, Rooney Mara is almost perfect as the damaged hacker who comes to trust him. This unlikely duo — and the Vanger family rogues gallery featuring Stellan Skarsgård, Robin Wright, Joely Richardson, etc. — drives this Nordic tale of murder and misogyny spanning decades. Extremely good, as was the original Swedish-language version. Buy both if you get the chance.

We entered the theater with trepidation. We are die-hard Muppets fans who consider their late creator Jim Henson a Rock God. Would this movie taint our treasured memories? Well, co-writer/co-star Jason Segel has exceeded our expectations and crafted a flick that re-launches The Muppets for a new generation, pays homage to their past, and has just enough painful where-are-they-now scenes to give it some drama. Amy Adams, Segel and his “little brother” (who’s made of felt) gather the gang together in a desperate bid to save the old Muppet Studios from an evil oil baron (Chris Cooper). Won an Oscar for best song. Recommended.

Jonah Hill and director David Gordon Green try to revive the “kids doing inappropriate things” comedies of the ’80s with mixed results. Fans of Hill like this movie as Jonah spends a wild evening driving a trio of otherworldly neighbor brats all over town. He does his patented smooth-stupid shtick, with weird put-downs and endless prattle of nonsensical urban slang to fill any quiet moment, but it never really came together for us. That being said, the people in the seats in front of us were laughing their heinies off. You decide.