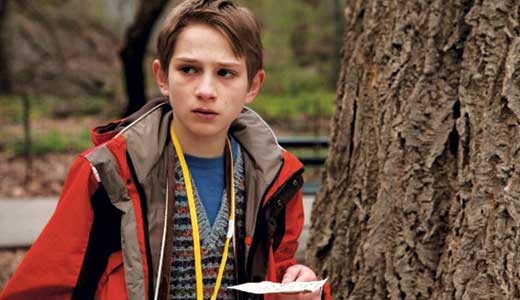 While the ads focused on co-stars Tom Hanks and Sandra Bullock, who are almost incidental, the real stars are young Thomas Horn and a mute Max von Sydow. Horn plays Hanks’ adoring son, devastated when his dad is killed in the World Trade Center destruction. Looking for some meaning to it all, he finds a mysterious key that sets him on a path leading to almost mystical coincidences and otherworldly people. The kid is amazingly good in this allegorical tale of tragedy, recovery and forgiveness.

IN THE LAND OF BLOOD AND HONEY

A lot has been made of the fact that this is Angelina Jolie’s first writer-director credit, but she had a lot of help from a guy named William Shakespeare. Essentially a Bosnian “Romeo and Juliet,” Jolie explores acts of lesser atrocity as tokens of mercy. A Serbian police officer takes a Muslim girl captive to protect her from certain torture and death, but she remains under constant threat of rape by his men — and both face death if the men suspect the two are in love. Jolie stumbles a bit, but the film succeeds in delivering its message on the futility of war.

This talky artsy outing by David Cronenberg was a bit disappointing to many of his diehard fans because it was so cerebral, exploring the relationships between Carl Jung, Sigmund Freud and a beautiful, mysterious patient, Sabina Spielrein. But with Michael Fassbender, Viggo Mortensen and Keira Knightley as the central trio, how can you possibly go wrong? Cronenberg clearly has a grasp on the motivations of each, particularly the affair between Knightley and Fassbender, and certainly has lots of first-hand experience in psychoanalysis. A thinking man’s picture.

A NIGHT TO REMEMBER

Long before James Cameron dipped Winslet and DiCaprio into the icy Atlantic, the tale of the doomed Titanic was already a superb motion picture. Now available in a Criterion/Blu-ray release, this terrific British telling eschews romantic fiction in favor of a brutally accurate and terrifyingly documentary-ish movie featuring then-state-of-the-art effects. The star is, of course, the ship itself; co-stars include Honor Blackman, who would later become Pussy Galore in “Goldfinger.” A must-own.

ALVIN AND THE CHIPMUNKS: CHIPWRECKED

Jason Lee — who once had a promising career — returns once again as Dave, the human foil for his CGI-animated chipmunk charges. If you need a review, then you obviously have never seen any of the previous movies: This is just another mindless, high-pitched excuse for Alvin, Simon and Theodore to run hyperactively amok with their female counterparts in tow. We can’t understand a single word they say, but the rugrats have no problem following it, and sing along when the need arises. Squeaky clean fun.

A welcome documentary on the life and career (so far!) of the Schlockmeister General, Roger Corman. Over the past 60 years, Corman has made hundreds of movies (even he’s not sure how many) and has often boasted that “not one has ever lost money.” Along the way he has launched the careers of hundreds of actors and filmmakers, many of whom appear here to discuss what is was like to work with the legendary skinflint, gentleman and raconteur. Entertaining as hell.

Let’s face it, the vast majority of holiday themed CGI-animated fare of recent years has sucked. All the good stories have been told, and the studios are simply cranking out dreck to foist on unknowing kids who deserve better. That’s why we liked this rancorous tale of the Easter Bunny’s son, who wants nothing to do with the family business. Voiced by (shudder) Russell Brand, he plays the drums, moves in with James Marsden, and becomes a slacker. Well-written, with great animation and terrific voicework by Kaley Cuoco, Hank Azaria, Hugh Laurie and a host of others. At the end, you’ll actually feel like you watched a movie, not a “seasonal product.”

Now available at a reasonable price: Our vote for the best TV drama of all time. This brilliant BBC series starring Derek Jacobi, George Baker, Margaret Tyzack and John Hurt (as Caligula!) follows the history of the Roman Empire into the reign of the stuttering Claudius, who pretended to be a fool in order to survive the murderous machinations of the Roman Senate. The historically accurate nudity, debauchery, blood and violence shocked TV audiences of the day, and established the BBC as the de facto source of TV drama in America for generations to come. A must-own.

This subtitled gay drama from Iceland follows Atli Oskar Fjalarsson, a young man studying in England who kisses another man and finds he likes it. Returning home, he keeps it a secret and parties with his buds until the Other Man shows up and wants to continue their relationship. A nice blush-of-first-love outing among the frosty fiords.

Whitney Houston lived a too-short life filled with bad choices, but making this movie wasn’t one of them. She will live forever as the endangered pop music diva under the protection of Kevin Costner (the writer’s second choice after Steve McQueen declined), who finally finds love in time to unleash her signature tune, Dolly Parton’s “I Will Always Love You,” at the movie’s climax. A wonderful musical/movie experience that everyone should own.

THE GIRL IN ROOM 2A

New to DVD: an all but lost staple of the Euroexploitation genre, resplendent with Giallo elements, sadism, gore and, of course, nudity. After an opening murder, the movie shifts gears to a newly paroled woman (well-hootered scream vet and 1966’s Miss Italy, Daniela Giordano) who moves into a spooky boarding house where she sees visions of blood. Bouncy social worker Rosalba “Lady Frankenstein” Neri proves to be of less than no help. Gangs o’ satanic badly dubbed Italian fun.