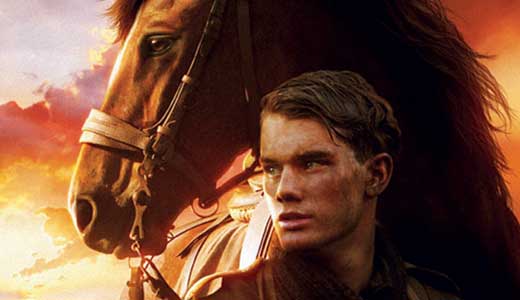 A labor of love for Steven Spielberg, based on the Tony Award-winning Broadway play about a young man and his horse, separated amid the horrors of WWI. Like “Lassie Come Home” and “Lad: A Dog,” this is, at heart, a tale of love, and of a friendship that must overcome insurmountable odds as a man walks into the hell of the battlefield to bring his beloved mount back to the farm. In doing so, he changes the course of the world. Didn’t become the breakout hit that Spielberg wanted, but we predict it will, like “The Wizard of Oz,” grow in popularity for years to come.

WE BOUGHT A ZOO

Matt Damon walks appropriately wide-eyed through director Cameron Crowe’s true tale of a distraught widower who renovates a ramshackle zoo. The killer cast includes Thomas Haden Church, Colin Ford, Elle Fanning, but especially Scarlett Johansson, who slums around in blue jeans and a work shirt, yet manages to glow in every scene. That rarest of things: A PG kids movie that even the most jaded adult can love. Recommended.

Pee-uww! What a freakin’ turkey! But you gotta love this low-rent, ultraviolent, killer-alien-vs.-brain-dead-rednecks outing for its complete disrespect of the usual genre tropes, along with any discernable attempts at plot, character development or logic. When a spacecraft crashes into a small-town junkyard, releasing all manner of cheezy FX, the owner offers a bounty to anyone who can get them gone. From there it veers off into over-the-top action, gore and silliness. One damn fun movie.

Thomas Dekkar (“Terminator: The Sarah Connor Chronicles”) and Lynn Collins (“John Carter”) are simply terrific in this tragic tale of Dekkar’s 3-year-old son, who toddles into a snowbank and dies, sending his family and the whole town into a spiral of unbearable guilt. A big-ol’ indie chick-flick, to be sure; made to make you cry.

BEING ELMO: A PUPPETEER’S JOURNEY

This is, hands down, the best thing we’ve seen in months. A documentary, it follows the career of Kevin Clash, the guy behind “Sesame Street”’s Elmo, arguably the greatest puppet performer since Kermit, and the man’s relationship with his own daughter, who often had to go without a father. Just imagine how it was for Clash to grow up “playing with dolls” and living in ridicule and poverty while aiming to master a craft that any 3-year-old can do. But it all comes together in the most life-affirming, soul-enriching way imaginable as it captures the perfect innocence of a child in every aspect of his life. Do not miss this.

There’s so much to love about this Italian-language thriller that we don’t know where to start! A Hitchcockian tale of two attractive people who fall passionately in love. All is romantic bliss until the couple takes a snuggly trip to the countryside, where her past resurfaces in terrifying ways. A nice mix of darkness and light; an American remake is scheduled to appear in 2014.

A love letter to Bollywood and the universality of love, longing and the vagaries of life. A college engineering student lives off his rich daddy’s largesse while secretly trying to launch a filmmaking career. Then he meets Amy Jackson, the smokin’ hot — and we mean SMOKIN’! — daughter of a conservative Christian family for whom watching movies, falling in love and having fun are strictly forbidden. Sounds trite and formulaic, right? Trust us, this thing is worth the search.

A wonderfully low-rent bit of end-of-the-world nonsense from our buds at The Collective. A man wakes up in a freezer and stumbles out into a world devastated by alien invasion, unable to remember even his own name. The few remaining humans have militarized, and draft him into a mission to re-establish a breathable atmosphere. A bloody mix of crazed survivors, alien-killing machines and dark, apocalyptic visions — yet surprisingly funny. It won’t change your life or anything, but worth checking out.

The history of the ill-fated luxury liner continues to unfold. In this latest chapter, average-joe Rob Goldsmith wins a contest. The prize? A personal trip to the bottom of the ocean to see the Titanic in all her schmutz-encrusted glory. And we get to tag along in this multi-media set that includes DVDs, a CD, a hardbound book, and scores of replicated newspaper accounts, tickets, blueprints and postcards from back in the day. A must-own for any Titanophile.

No, this isn’t some crappy SyFy CGI slither-fest. The Titanoboa was a real, breathing denizen of Earth’s past that weighed over a ton, spanned 48 feet and probably snacked on giant crocodiles. It’s all revealed in this exciting two-hour Smithsonian Channel doc that begins in the coal fields of Colombia, where the first specimen was unearthed, and ends with a life-size recreation of this awe-inspiring predator being installed in the National Museum of Natural History.

The character of Captain Jack Harkness, a bisexual man whose death cannot occur until far into the future, making him temporarily immortal, began on the BBC’s latest regeneration of Dr. Who and was spun off into “Torchwood.” That show never really became the hit that Dr. Who was, but it held too much potential to let it die; so STARZ resurrected it as a cable series, giving the writers far more leeway to explore themes of humanity’s potential for good — and evil. And guy-on-guy sex, don’t forget that. John Barrowman stars with Eve Myles, Mekhi Phifer (who is terrible) and Bill Pullman.