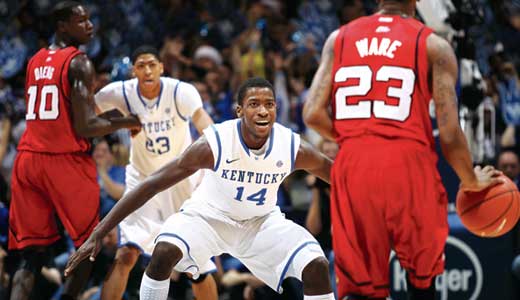 What can you say about Louisville going to the NCAA Final Four, except it’s a total shock?

The Cardinals are headed to New Orleans to play No. 1-ranked Kentucky and take a shot at winning the college basketball national championship. A stunning turn of events that proves everyone has been wrong about Louisville.

Or maybe everybody is right. Right that Louisville is a team that can’t shoot a lick, doesn’t have the size to measure up against tall teams, and lacks the talent to get anywhere in the NCAA — much less go up against Kentucky.

But that’s the beauty of college basketball: Everybody — from fans in T-shirts to TV analysts in fancy suits — can be exactly right, and still be wrong. Louisville is a team that can’t shoot a lick and lacks size. But they’ve gotten on a roll at tournament time by parlaying a touch of talent with a bit of luck and what used to be called giving it the old college try.

From Louisville to New York to Portland to Phoenix, the Cardinals have won eight-straight games. Louisville isn’t suddenly a sleek bullet train of basketball. But what started three weeks ago as a kind of Little Engine That Could is now more like one of those powerful old coal burners that’s gotten up a real head of steam.

If I was Kentucky, I’d be scared to death.

A funny thing happened on the way to the tournament

But scared to death is not a Kentucky characteristic.

The story of how Kentucky arrives in this Final Four is the story of a team chock full of talent, tall and on top of its game. The winningest team in the history of college basketball, traveling with the most fans, who will, by game time, probably own three of every four seats in the remodeled Mercedes-Benz Superdome, now configured to seat 55,000 fans for basketball. Kentucky will be seeking its eighth NCAA title.

Ohio State and Kansas play in the opposite-bracket semi-finals for the right to meet Kentucky (oops, or possibly Louisville) for the college basketball crown.

“It’s Kentucky’s to lose,” says Chuck Nalevanko, a former U of L player and Louisville high school coach, who often serves as LEO’s college basketball analyst. “Let’s face it. The only team that can beat Kentucky is probably Kentucky.”

But Louisville has the best story.

Which begins at the end of what had been a long and grueling season filled with games that left fans exhausted and players wearing grim faces.

You know what happened. Louisville won four games in four nights in Madison Square Garden to take the Big East Tournament. That slurp from the Fountain of Youth put newfound lift in Louisville’s wings, and the Cardinals flew away into the NCAA. It is Louisville’s 38th NCAA appearance, with two championships. So they know how.

Louisville breezed by Davidson, survived New Mexico, laughed at Michigan State and came from behind to beat Florida for the West Region championship. The victory over heavily favored No. 1 seed Michigan State was remarkable for how fast and quick Louisville looked compared to its opponent. And more confident. Like the Cards should have been favored. Center Gorgui Dieng blocked seven Spartan shots, and down at floor level, little Cardinal elves pick-pocketed Goliath. And laughed about it. A Michigan State guard took to hammering a shoulder into Louisville guard Russ Smith every time he passed, but Smith gave it the old Hollywood act, throwing his arms in the air and stage stumbling to distract everyone, while on the other side of the court, guard Peyton Siva slipped into the lane to set up a score. Total mismatch of team personalities.

And where are the Cards getting their confidence?

In the West Region final in Phoenix, it looked like Florida had Louisville buried — hitting eight of 11 three-point tries in the first half. But the Gators sank none of nine in the second half. That was a credit to Louisville’s first-class defense and to a boost of guts they seem to get from Pitino.

With about nine minutes left in the game, Louisville still trailed Florida and was not getting traction for a comeback. The Cards looked worn out. Like the adrenaline high they’d been living on for three weeks had suddenly whooshed out of them.

When Siva was whistled for his fourth foul, Pitino exploded along the sidelines and was slapped with a technical. Versions vary of what Pitino was saying, and to whom, how far out of the coach’s box he stepped, and whether a referee with rabbit ears was waiting to “T-him up.” But T’d up he was, and with Florida hitting four straight free throws to build an 11-point lead, it looked like Louisville was dead.

“I’m not going to lie,” Louisville forward Chane Behanan said later. “I thought it was over after that.”

But it wasn’t over. Everybody was wrong again.

The Cards pulled themselves together and staged their most withering charge of the game.

“That’s where Pitino is just always so positive,” Nalevanko says. “He doesn’t let the players believe they don’t have a chance. Being realistic, though, at the nine-minute mark down 11, it’s damn near over.”

But Louisville basketball is like grand opera with a twist — it’s never over until Pitino stops singing.

In the final seconds, Florida fouled Louisville guard Russ Smith, a little guy with the interesting habit of shooting his free throws the instant the referee hands him the basketball — the same way he shoots field goals, getting the ball on its way before the big boys can come along to stuff him.

Smith hits the first one, and now the Florida coach calls a time-out to “ice” the free throw shooter. Give him some time to think about the life-or-death import of what he is about to do.

Which brings us to Louisville fan Ralph Haas’ favorite play of the game.

“So now there’s the time-out and they go away for about eight minutes of TV commercials — enough time to microwave a pizza,” Haas explains. “When they come back, and the TV’s ready, and all the cameras are set, and the ref finally hands Russ the ball — he just pops it in.”

The biggest basket of the final minute came when Behanan “posted” his man near the basket and called for the ball. When he got it, he waved away his teammates and went to work: a quick fake to the left, spin to the right. Facing the basket, sky up — sink it. Victory.

Pitino says the difficulties of the regular season toughened his team for the tourney.

“We never concerned ourselves about the multiple injuries, we just stayed focused … stayed focused on getting better,” Pitino says. “Chane got better. Gorgui got better. Peyton changed his whole game in the postseason. Everybody improved, and that’s all we were after.”

Still, he adds, “It’s an unbelievable thing that we could get where we are right now.”

Pitino is an actor, a bluffer, a salesman, a singer. But he knows talent and recognizes there is a gap between his team and the top-ranked clubs. “The other day we had an open practice and were like two for 20 in open drills. Gorgui Dieng hit one of the two,” he laughs. “That’s the way it is if you look at us on paper.

“But if you’re playing against us,” he says, “your legs are giving out in the last five or six minutes. I think one time last year we were down 18 with five minutes to go against a very well coached Marquette team and won. So beauty is not in the eyes of the beholder when you look at our basketball team. But you can see the potential. You can see how good Chane Behanan is going to be. You can see Gorgui Dieng is going to be one of the premier centers in the game. You can see Russ Smith is tough to guard. You can see Wayne Blackshear, who is a McDonalds’s High School All-American, someday is going to be terrific. So we have — we’re just young, and we’re growing.”

Does that mean a trip to the Final Four in 2012 is just the thing to build confidence for Final Fours of the future?

Because, as noted, it will be nearly impossible for Louisville to beat Kentucky this year. Kentucky easily handled Louisville during the season.

All year long, the Wildcats have stood out as a super team amid a bunch of solid teams. Kansas and Ohio State? They’re solid. As were Syracuse and Michigan State. Indiana came back. North Carolina never went away. Missouri looked like a winner, but wilted the first time somebody (Norfolk State) turned up the lights. A lot of teams do that.

But Kentucky gleams when it steps into the limelight — even though it starts three freshmen and two sophomores. UK lost to Indiana in December, but got all that back in a rematch last weekend in Atlanta. Kentucky led nearly the whole way. Looked cool and confident. Hit 35 of 37 free throws — 35 of 37!

Defense is not something one would expect from a team full of superstars, but it is a strong point for Kentucky. At the heart is center Anthony Davis, whose wingspan commands a huge arc of airspace radiating above and away from the basket. On offense, the Cats begin outside and slash to the basket. The slasher-in-chief is Michael Kidd-Gilchrist, a 6-8 guard. Best passer is Marquis Teague. Doron Lamb is a strong three-point shooter, as is Terrence Jones, who carries a tough scowl on his face and plays to character. Sixth man is native Kentuckian Darius Miller, a good shooter and a senior to boot.

Of course, the real star is John Calipari, who has the confidence of his players and a breezy demeanor that takes pressure off the team. All coaches claim to be “friends,” but most aren’t all that friendly — especially with Calipari. You could ice a keg of beer by placing it between Calipari and Pitino. That match-up could create a terrific Final Four sideshow.

So is there any way Kentucky can lose? Probably not.

The opinion here is Cardinal fans will be a match for the Cats in what should be a sea of red and blue revelers Friday night on Bourbon Street. And maybe on Sunday, too.

But is it possible Louisville could upset Kentucky Saturday in the Superdome?

Most everybody says no, and they are absolutely correct.

Dream Game Analysis: A look at how this tilt compares to past Cards vs. Cats match-ups