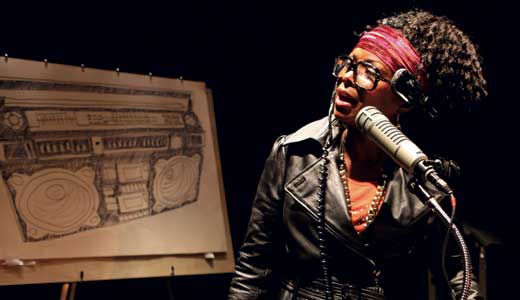 ‘How We Got On’
Written by Idris Goodwin. Directed by Wendy C. Goldberg. Continues through April 1 at Actors Theatre of Louisville as part of the Humana Festival of New American Plays. For tickets or info, go to actorstheatre.org or call 584-1205.

It’s 1988, somewhere in the suburban Midwest, and the hot new thing on cable TV is a show called “Yo! MTV Raps” — and suddenly hip-hop is in the hinterlands.

Not surprisingly, MTV’s entry into the field was a lagging indicator; by 1988, rap and hip-hop had already produced a generation of geniuses who were reshaping the very essence of American popular music and culture. But there’s no question that the show inspired a new wave of artists and performers whose perspective was shaped not by urban ferment but by suburban angst and isolation.

On the surface, Idris Goodwin’s intriguing and poignant drama “How We Got On,” which opened Sunday as part of the Humana Festival of New American Plays at Actors Theatre of Louisville, is about teenage dreams of hip-hop glory — of getting on the show. It’s a closely observed account of those young dreams, but along the way, it evokes universal themes about self-discovery, the complexities of friendship, and the urgency of artistic aspirations.

The three teens at the heart of Goodwin’s story are Hank (Terrell Donnell Sledge), an African-American youngster whose father is a devout academic; Julian (Brian Quijada), a Latino whose dad is more interested in schnapps than scholarship; and Luann (Deonna Bouye), whose NBA-star father seems determined to raise his daughter in the image of preppy perfection.

Presiding over their coming-of-age story is the Selector, an emcee (played with virtuoso bravura by Crystal Fox) who, from her perch above the stage, narrates, supplies historical context, explains the technique and tools of sampling and cross-fading, and gives voice to the parents, teachers, coaches and others whose influence shapes and distorts the teenagers’ experiences.

“How We Got On” is a fascinating piece of theater that requires split-second timing, especially in scenes where the Selector leads the characters into intricately contrapuntal examples of layered, sampled and cross-faded raps. For that alone — and to see the ingenuity with which director Wendy C. Goldberg and sound designer Matt Hubbs, and the rest of the technical crew have addressed those challenges — the play is worth seeing.

But beyond that, it’s also a human story about competition, loyalty, friendship — and craft in its many forms. Hank — whose vulnerable intellectuality and eagerness to please is interpreted with fine nuance by Sledge — is a meticulous student of language, a person for whom perfect rhymes and rhythms are important in their own right, a means of expression, and a way to earn respect. Julian, played with charismatic muscularity by Quijada, is totally focused on winning, by any means necessary; for him, the words and rhythms are as disposable as a pair of fashionable basketball shoes. Luann, who evolves in Bouye’s interpretation from a preppy caricature to a bold, independent artist, understands that art is all about imperfection. And though the Sunday afternoon press opening got off to a sometimes sluggish start, the production grew increasingly fluid as it moved along. And there came a thunderous, wrenching moment when Julian realized that he did, indeed, have something to say. That moment definitely got on.