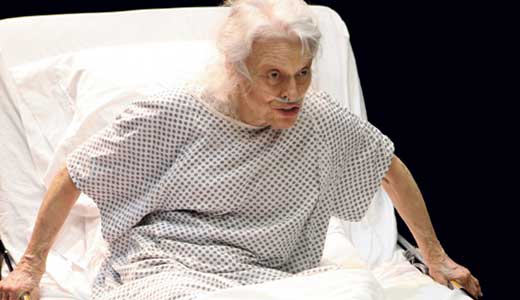 ‘Death Tax’
Written by Lucas Hnath. Directed by Ken Rus Schmoll. Continues through April 1 at Actors Theatre of Louisville as part of the Humana Festival of New American Plays. For tickets or more info, go to actorstheatre.org or call 584-1205.

There are things to admire in the Actors Theatre production of Lucas Hnath’s “Death Tax,” which premiered last week as part of the Humana Festival of New American Plays.

Philip Witcomb’s set is as sparse and functional as the nursing home it represents. Brian H. Scott’s lighting is bleak, clinical and unforgiving — light fit for morgues and post-mortems. That seems appropriate: Hnath’s script is a psychological post-mortem that attempts to slice through issues around death and deception, power and poverty, conspiracy and family.

And in a more sympathetic production, the topical, highly charged scenario might accomplish just that. Maxine (Judith Roberts), a wealthy nursing home patient, is being cared for by Tina (Quincy Tyler Bernstine), a nurse who desperately wants to regain custody of her young son (who’s stuck in Haiti). Maxine believes — or claims to believe — that her daughter (Danielle Skraastad) and Tina are conspiring to kill her before the end of the year — so that the daughter can avoid paying an inheritance tax that goes into effect on Jan. 1. To fight back, Maxine offers Tina a substantial bribe — money that will help Tina in her custody battle and will eventually suck Todd (Paul Niebanck), Tina’s supervisor, into a venal conspiracy more vicious than Maxine’s imagination could construct.

There is wit in Hnath’s language — humor, irony and intricate wordplay couched in the patterns of natural, ordinary speech, with all its tics and repetitions. At times, he cultivates the sort of daring banality you’d expect to find in some of Samuel Beckett’s early novels. And I think there may be latent power in the lengthy monologues through which his characters deliver their ideas.

But little of that power emerges in director Ken Rus Schmoll’s static interpretation. For most of the play, he poses his characters like statues, safely far removed from one another, an isolation that robs the play of any physical intensity. And only rarely does Schmoll reveal whatever nuances might lurk in the language. Rather, every moment plays out with a barren, ultimately tedious anger as unyielding and bereft of shadows as Scott’s lighting design. It’s a director’s vision, of course — and possibly it’s a brave one. But perhaps, lurking somewhere under all that heat and light, one could pick up a corner to reveal a few dark and interesting shadows.

As for the performances, they’re focused and energetic, despite their lack of dimension. Whether Tina and Todd are deeply corrupt or simply opportunistic participants pulled inadvertently into Maxine’s game — if it is a game — is part of the mystery, I suppose. Neither performance answers the question. As the daughter, Skraastad gives away a bit more and offers what may be the only emotionally genuine moment in the play. But it’s Maxine who fuels this play, and Roberts — despite being constrained to her hospital bed — is the most powerful physical presence of all, writhing, coiling and showing her teeth like a pale serpent suspicious of everything around her, and always ready to strike.