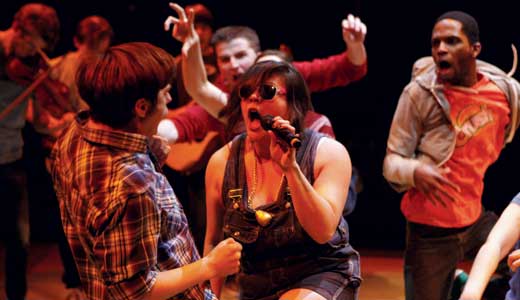 There are many reasons to love the Humana Fest at Actors Theatre. It’s an opportunity to discover the work of emerging writers and directors, and to witness the new directions taken by established artists. It’s a stimulant to the city’s intellectual economy — a chance to be part of the trends, issues and techniques that are constantly reshaping the future of theater. And for a month or so, it’s a time when downtown is overrun with world-class visiting artists.

But one of the best reasons to love the fest is that it’s just plain fun. And in that regard, it’s hard to beat the annual Apprentice Company production. Each year the company chooses a theme, recruits a list of playwrights, gathers a multitude of players — some of the best young performers in the country — and puts on a show. This year’s theme is food: America’s weird, paradoxical fascination with food and dining, and all the comical, cruel, dysfunctional, sentimental, pretentious and perverse ways we join together at the table.

Five playwrights contributed to this year’s production, entitled “Oh, Gastronomy” — Michael Golamco, Carson Kreitzer, Steve Moulds, Tanya Saracho and Matt Schatz. The project was co-conceived and developed by Sarah Lunnie (the Literary Manager at ATL), and directed by Amy Attaway, who deftly molds 28 vignettes — including several connected subplots and some rollicking musical numbers — into a satisfying whole that seasons lots of laughs with a nicely judged measure of poignancy.

“Oh, Gastronomy” is one fine banquet, with nary a weak dish on the menu, but here are a few highlights. Schatz offers musical segments that veer from the comical to the poignant. There are a couple of gut-busting numbers about speed-eating competitions (with Daniel Kopystanski crooning about his peculiar gift); competition between two Community Supported Agriculture providers (Liz Malarkey and Trent Stork) plays out as a musical throw-down with a hip-hop edge; and a wistful duet portrays a soldier far from home who craves his favorite foods (Alexander Kirby) and his distant love (Katie Medford), who pledges not to eat those foods until the two can share them together.

There’s a droll segment by Saracho about a gal (Sabrina Conti) whose heartbreaks and Facebook dramas always involve an escalating ladder of junk foods, and the roommate who tries to save her (Stork), and another that features what may be the most virtuosic act of consumption ever seen on stage, when Lisa Dring, as an office worker, eats a banana in a way calculated to drive an observer (J. Alexander Coe) beyond the point of distraction. And in a segment called “A Numbers Game,” Saracho opens a painful window into the grief and shame associated with weight gain.

Carson Kreitzer pays comic tribute to the romance of food trucks, and to the multifaceted joys of homegrown tomatoes — whether grown on a farm, in a backyard garden or in a pot on the window sill, and offers some funny food-related word-game segments where competitors come up with titles for tales about restaurant-related deaths (“Mung Bean Incident”) or Shakespearian plays (“O, Jell-O”). And the act of ordering in restaurants comes up multiple times in a splendid series by Michael Golamco: ordering dishes from one’s own memories (The day my cat died); strange barters that equate restaurant dishes with all sorts of favors; and the moral calculus of how the food was created.