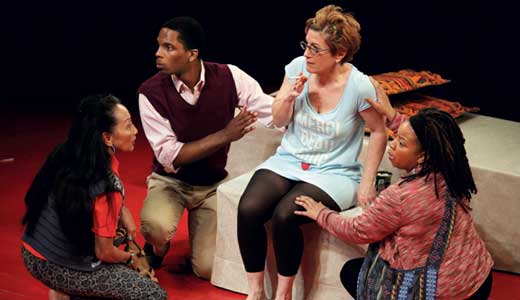 ‘The Veri**on Play’
Written by Lisa Kron. Directed by Nicholas Martin. Continues through April 1 at Actors Theatre of Louisville as part of the Humana Festival of New American Plays. For tickets or more info, go to actorstheatre.org or call 584-1205.

Last Wednesday night outside the KFC Yum! Center, Occupy Louisville protested corporate influence on political policy-making in America. The Occupy folks were targeting the American Legislative Exchange Council, a cozy collective of corporate officials and conservative lawmakers who work under the “free market” mantra to draft legislation designed — among other things — to limit the power of unions, gut environmental regulations, impede health care reform efforts, and pretty much ensure that government of, by and for the corporations will not perish from the earth, or at least from the United States.

Meanwhile, across the street at Actors Theatre of Louisville, the 36th Humana Festival of New American Plays opened with Lisa Kron’s droll anti-corporate comedy, “The Veri**on Play.” It’s a fast-paced, gut-busting, customer-service satire set in a dystopian world — our dystopian world, really — where all the old civics lessons have been bent, folded and mutilated: Once we were citizens; but now we’re all just customers. And as customers, we’re at the mercy of the phone companies, health insurance companies and mortgage brokers whose capricious, arbitrary behavior rules our lives.

Kron plays befuddled protagonist Jenni, whose attempt to correct a billing error kicks off a trompe l’oeil nightmare of call center interactions (imagine Ernestine, Lily Tomlin’s famous telephone operator, filtered through an Orwellian sensibility). Just as frustration is dragging Jenni over the cliff of madness, she’s taken up by an underground cell determined to bring down the big guys — all of them. That cell, led by Ingrid (Hannah Bos), consists of as weird a bunch of outlaws as you could hope to find in a caper comedy.

And with nearly all the actors playing dual roles — roles that involve plenty of verbal wit and nimble physical choreography — the play is full of zesty delights for fans of comic acting: Bos’ bent-elbow sideways exits and exotic accent as the leader of the partisans, and her naïve wide-eyed innocence as a conscientious call center operator; Calvin Smith’s hip languor as a dude who never reads his phone bill because knowing about billing errors might disturb his psychic equilibrium; Joel Van Liew as the neurotic genius who discovers a fundamental error in the power company’s billing process; Clayton Dean Smith as the sunniest customer service guy in the world; Ching Valdes-Aran as the crusty curmudgeon who takes thunderous command at a crucial moment; Kimberly Hebert-Gregory, whose riff on financial “experts” is one of the play’s defining moments; Sabrina Conti and Chris Reid in myriad roles; and Carolyn Baeumler as the quintessential sinister sister.

On opening night, director Nicholas Martin had the cast moving at such a brisk, satisfying pace that even a slightly overworked exposition moved forward with glee. And thanks to costume designer Kristopher Castle and wig designer (yes, those wigs are essential!) Heather Fleming, the play has a bright, contemporary Commedia dell’arte look, with all the over-the-top caricatures you might expect. Speaking of over-the-top, Jeanine Tesori’s musical contributions, Benjamin Marcum’s sound design (including the deft use of incidental music and at the culmination of a global chase scene), and Tom Tutino’s creatively minimalist set give the play plenty of springy energy.