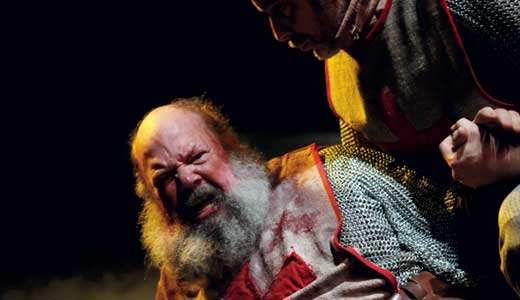 ‘Michael von Siebenburg Melts Through the Floorboards’
Written by Greg Kotis. Directed by Kip Fagan. Continues through April 15 at Actors Theatre of Louisville as part of the Humana Festival of New American Plays. For tickets or more info, go to actorstheatre.org or call 584-1205.

Outside the walls of Constantinople: the clank and crunch of chain mail armor; the shriek of medieval combat; the thwack of a crossbow; creamy layers of fog seeping over the mangled body of a great fallen warrior.

A major American city (where one can still find a rent-controlled apartment): a droll metrosexual who specializes in the procurement of unusual goods; an urbane Central European baron whose obsessions include Turkish crimes against Christendom — and a very strange approach to cookery.

These are some of the elements in Greg Kotis’ play “Michael von Siebenburg Melts Through the Floorboards,” which runs through April 15 at Actors Theatre as part of the Humana Festival of New American Plays. Kotis, who won Tony and Obie awards as the author of “Urinetown — The Musical,” is no stranger to unusual premises, and his new play — which ATL offers in an extravagant, entertaining production — is as unusual as they come.

Long ago, outside the gates of Constantinople, a group of beleaguered Austrian warriors discovered that a certain food, when properly tenderized and seasoned, yielded immortality. Half a millennium later, some of those folks — including Baron von Siebenburg (Rufus Collins) and his assistant Sammy (Micah Stock) — are long-lived gourmets who’ve adapted well to modern life (they still use the old cookware, but they’re not immune to the powers of the Cuisinart).

But modern life brings its complications. Sammy finds modern women troublesome because they’re “empowered” — a word Stock delivers with a comic relish that Rush Limbaugh might envy. Von Siebenburg’s pesky landlady (sharply realized by Rita Gardner) is giving him fits, perhaps because his rent control agreement has been in place since the 1930s, or perhaps because he’s been having a lot of women over for dinner.

Meanwhile, von Siebenburg has been having ominous night visions courtesy of his old military comrade Otto (played with grand, oversized humor by John Ahlin) and his long dead wife, Maria (Caralyn Kozlowski), whose angelic grace gives way to her own comically klutzy martial instincts when she’s forced to take up the sword (in a fight scene choreographed by Joe Isenberg).

The play is also populated by cops and the random young women (Ariana Venturi and Laura Heisler) that Sammy invites to the Baron’s bachelor pad.

All in all, the play is a fine comedy from the pen of a writer with a keen knack for satirizing both pop culture and the steaming fumes of religious and ethnic suspicion that still bubble up from the cauldron of ancient wars. But Kotis’ satirical intent is submerged in a broth of fun dialogue with outrageous accents (Collins, Ahlin and Stock have a field day under the tutelage of dialect coach Rinda Frye).

This is opulent theater indeed, and director Kip Fagan brings everything together in the service of good old-fashioned fun. Fagan is assisted by a cracker-jack team that’s pulled out all the stops for this production: Michael B. Raiford, scenic design; Lorraine Venberg, costumes; Brian J. Lilienthal, lighting; Matt Callahan, sound; and wigs designed by Heather Fleming.