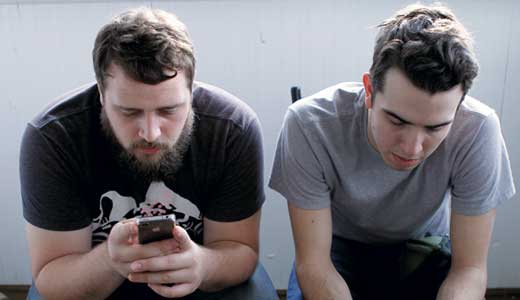 After traveling around for a while lost in those Midwestern woods, prodigal son and ex-Chemic leader Scott Kirkpatrick has returned with a new Bro. Stephen album of quiet folk music, Baptist Girls. Next week he’ll be traveling again, this time to Austin, Texas, for South by Southwest, where album guest vocalist and violinist Cheyenne Marie Mize might just sit in with him. Before he leaves, though, Kirkpatrick will perform at his day job.

LEO: Tell me about your early days in the Louisville music scene.

Scott Kirkpatrick: Well, the early days for me are definitely the times I spent playing at open mic nights at Molly Malone’s with guys like Warren Ray and Jamie Barnes. I definitely learned how to be a disciplined songwriter by doing that, and always having the push to present new and better songs every week. It was a great way to start things.

Eventually, I wanted to separate myself a bit from the open-mic scene; I recorded the Chemic record, and we played a million shows around and out of town, at places like The Rud, The Pour Haus, Skull Alley and The 930.

As a listener, the early days were a little different … I definitely miss going out to see The Merediths, The Pine Club, Reading, etc., and I will never forget buying my first Louisville Is for Lovers record and hearing Jamie Barnes’ “Red Prescription” for the first time. That definitely changed things for me.

There were definitely quite a few missteps along the way through all of that. I think one of the biggest missteps I made was being pretty shy and having a hard time feeling connected to the rest of the Louisville music scene. I definitely wish I would have been more involved with other cool local bands. I wouldn’t be surprised if I was perceived as a jerk or something, but I hope not.

The other main misstep that comes to mind is being a really poor communicator and letting down all of the guys who were in and out of Chemic by not expressing myself or knowing what I wanted. The dissolution of that band was pretty traumatic for me, actually. I was young and made a lot of mistakes, but I was always doing the best I could. I guess it’s just hard to see the big picture when you feel like everything is moving around you so quickly.

LEO: How did you get hooked up with the Crossroads of America label in Bloomington? What do they do to help you?

SK: I got hooked up with them when I set up a show at the Old Louisville Coffeehouse back in 2006 or so. After an abysmally attended show, they came back to my apartment for pizza, and we really connected over pizza. They really liked my band Chemic, and I loved their bands, so we wanted to work together somehow. I eventually decided to let them handle the digital sales of the Chemic record Fever on the Forest Floor. After Chemic called it quits, they were excited to have Bro. Stephen on board, and it worked out perfectly …

First and foremost, they are the most supportive and encouraging group of folks, who are always there to love on me when I need it, or let me sleep in their spare room or play in my band when needed, or a number of similar things. They’ve fostered a creative community that I’m thrilled to be a part of. From a business end, they help with distro, licensing, manufacturing, booking, PR and all that good stuff. Also, Mike Adams recorded and produced Baptist Girls, so that’s obviously a big deal.

LEO: What else do you do for work and/or fun?

SK: I moved back to Louisville around Thanksgiving and have been working at Rye on Market since December, which has honestly been the best job I’ve ever had. I’m tending bar there, and it is really satisfying being in a place that is doing such incredible work while pushing me as a worker and simultaneously being infinitely supportive of who I am.