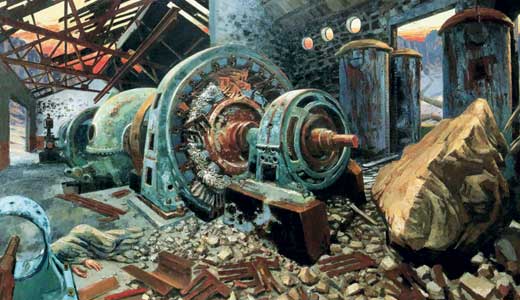 The space is silent, save for the peals of thunder that roar through the expanse. The scene presented could only have come from nature, and it did. The Taiko drum ensemble Tao has built a 40,000-square-foot research palace (which they call Grandioso) in the center of the Aso-Kuju National Park in Japan. The 19 men and women who play the deerskin drums and wear the colorful costumes require immense athletic ability to achieve the required stamina; they must rhythmically build to a climax (which, by the way, translates from Japanese as “emergency”). Tao has resounded in concert halls across New Zealand, Israel, Belgium, Italy and Taiwan. The show has been the best-selling event at the largest and most prestigious arts festival in the world, the Edinburgh Fringe, each year they have participated. Now, Tao comes to Louisville to unleash their new twist on the traditional beats of Japan. —Simon Isham

The Youth Performing Arts School is gearing up to perform the world premiere of a new work by internationally acclaimed composer David Maslanka. Even more impressive is the fact that Maslanka composed the original piece specifically for the YPAS percussionists. The work — his first composition for a percussion ensemble in more than a decade — is called “Hurtling Through Space … at an Unimaginable Speed.” Quirky … we like it. The ensemble will also perform works by William H. Smith, Christopher Rouse and Michael Burritt to cap off the evening. —Simon Isham

Dutch-born musician and former Indiana University professor Eva Legêne will headline the next concert in the popular Hear + Now series. A virtuoso on the recorder (that’s right, that thing you played poorly in elementary school), Legêne will play a newly arranged version of George Plain’s “Concerto for Recorder and Chamber Orchestra,” which was originally written for her. The arrangement emphasizes the modern usage of the harpsichord in music, as well as the traditional string quartet. Other musical features of the night will be the premiere of a solo harpsichord work by Jacob Gottlib; Dale Golden’s “Concerto Grosso” for harpsichord and string quartet; a piece for soprano, harpsichord and violin by Jeremy Beck; and two a capella works by Richard Burchard, performed by the Louisville Vocal Project. —Simon Isham

Greg Brown appears to be slowing down. While the Iowa native used to play more than 200 gigs per year, now he plays about 60. He’s also shied away from the studio in recent years in favor of recording at home. He’s had a wildly successful career as a singer and songwriter (as have his wife and daughter), and after nearly four decades on the road, a slower pace is well earned. Still, Brown resolutely says in his hearty baritone, “I want to mix it up.” Though it’s clear he won’t be stopping anytime soon, fans of the folk legend should take heed and check him out while they can. KCD gets the privilege of hosting one of the stops on his new Freak Flag tour. —Simon Isham

The annual “Itchin’ To Pick” bluegrass jam fest is my favorite kind of itch, and it returns for its sixth, biggest and bestest year to the inexplicable local home of quality bluegrass music, the (recently renovated) Galt House Hotel. Is it the charming view of Southern Indiana that’s so appealing? Or perhaps the endless playground that is the Galt House and its environs, so full of secret hideaway spots where old-timers can jam (musically, that is) with precocious young talents. As for the times, well, the website says, “Pickin’ starts anytime Friday afternoon ’til …? All day Saturday ’til? Some stay through Sunday afternoon.” Call the hotel for special rates and, as hosting organizers Bluegrass Anonymous say, “Keep pickin’!” —Peter Berkowitz

‘The Importance of Being Earnest’

You might have already seen this “trivial comedy for serious people” eight times in your life — it’s a fave of many theater groups and audiences alike — but if you’ve never seen it, or want to see it a ninth time, this production of the Oscar Wilde classic is a good one to catch, as Savage Rose always brings it when it comes to those old gems. This show features a handful of Savage Rose regulars, including Neill Robertson, Kelly Moore, Julane Havens and Mike Slaton, with artistic director J. Barrett Cooper playing Lady Bracknell. “A stellar cast will bring a provocative sensibility to the farcical happenings of the Victorian upper class,” says Cooper. “Mistaken identity, lost children and cucumber sandwiches all play a special role in Wilde’s satire on his own society.” —Jane Mattingly

What’s loud, bad at math and green all over? Me after drinking one too many green beers. Fortunately, I’ve given up green beer for Lent this year, so I will most likely just be loud and bad at math on Saturday as the Ancient Order of Hibernian’s annual St. Patrick’s Parade shuffles down the Baxter Avenue/Bardstown Road corridor (from Phoenix Hill Tavern to Mid-City Mall). The free, family-friendly parade begins at 3 p.m. and will feature more than 30 floats, bands and random vehicles (like the LEO bus!). The parade’s trophy presentation will be held afterward at O’Shea’s, with music by Eight Inch Elvis. Trophies? Of course. There are some serious float-builders out there who live for this event. Stake out your spot on Baxter and keep your eyes open for flying beads. —Sara Havens

While you can make art from just about anything, the literary arts have had a long association with the visual arts. Sometimes it’s as simple as ripping a page. Cheryl Chapman, Teri Dryden, Julius Friedman, Jack Girard and Rodney Hatfield are all working in collage, using discarded books for their source material. “This show came about after a librarian started giving me obsolete books that she was discarding,” says Friedman. “Being a designer of books, it took me many months before I could bear to tear them up to make collages. I finally did and enjoyed the process. After making a lot, the librarian encouraged me to show them. Hence the show came about.” The opening is Sunday from 3-6 p.m. —Jo Anne Triplett

A documentary that’s been winning prizes around the world will soon roll into town for its local premiere. “Bicycle Dreams” covers what is said to be the toughest sporting event on the planet: The Race Across America (RAAM.) In this contest, cyclists have just 10 days to pedal from Oceanside, Calif., to Annapolis, Md. The tight schedule and 3,000-mile course motivates some to pedal for as much as 40 hours without sleep or solid foods. Injuries, hallucinations and early tap-outs are not uncommon. Says Stephen Auerbach, the film’s director, “They deal with searing desert heat, agonizing mountain climbs and endless stretches of road. And they do it while battling extreme exhaustion.” I bet. It once took me 10 days to drive cross-country, and I’m still groggy. —J. Christian Walsh

Some things from childhood just can’t be forgotten. The feel of Legos, the smell of a McDonald’s cheeseburger and the lyrics of “Mary Poppins” are just a few. And when you think “Poppins,” perhaps dancing penguins come to mind, or Julie Andrews singing “A Spoonful of Sugar.” “Poppins” fans are in luck this week when the touring Broadway musical comes to town. With four stage productions running on three continents, this show has brought in more than $644 million and captivated 9.3 million viewers. The musical has won 44 major awards including the Tony, Oliver, Helpmann, and Evening Standard awards. And this “Poppins” tour, presented by PNC Broadway in Louisville, features new songs, lyrics and music, as well as a spoonful of the original standards. This mix of old and new makes the musical “practically perfect in every way.” —Anna Lawson

It has been said any publicity is good publicity. Tell that to artists Robert Mitchell and Michael O’Bannon. O’Bannon’s last exhibition in Louisville was closed (aka censored) after the complaints got more press than the art. That was 20 years ago. His controversial art is on view again at Zephyr Gallery. He says his latest work “explores the ideas of the absence of free will and the absurdity of human sexuality.” Mitchell has also hit on controversial subject matter — lynching. His exhibition, “The Racial Trace,” consists of photographs of fake lynchings he saw in 2003 during Halloween. The dummies were hanging from a porch of a New Orleans antebellum house. Let the conversations begin. —Jo Anne Triplett

According to the Mayans, our world will end in December 2012. Precursors to the utter destruction of Earth can be seen as Henk Pander presents large-scale paintings depicting death, demise and detailed detriment at the Cressman Center. The native Dutch artist is known for bold lines, as Pander uses strong brown and red tones to contrast the dominant blues. Defiant blues bring a dark overture to the story told in the paintings. The allegories in Pander’s works come from photos, eye-witness accounts and his own experiences. His interpretations show the importance of the events and how they shape our future. Born at the height of WWII, Pander’s appreciation of human-inflected damage brings a fresh and needed perspective to the art of death. —Allison Ray