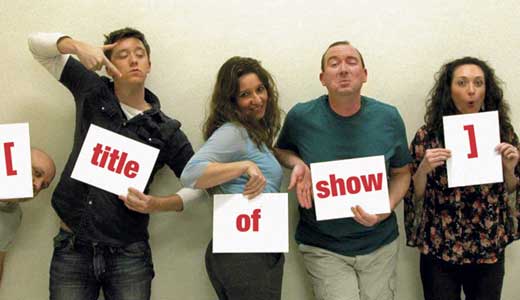 Spoken-word artists Kevin Coval and Idris Goodwin have partnered up to spread the word on how poetry and associated forms of expression and performance can confront and address clashing cultures and personal challenges, and now Second Story Books is bringing the pair to town. Coval’s impact really got going with “Slingshots: A Hip-Hop Poetica” a few years back, but his new volume, “L-vis Lives!: Racemusic Poems,” is incisive as hell in its open-eyed study of cultural appropriation and morally ambivalent reinvention. Yet the poet’s empathy is crystal-clear and runs deep, earning praise such as “In Kevin Coval’s voice is our hope for a new world of peace, grace and beauty” (Studs Terkel). Goodwin is a fellow survivor of HBO’s “Def Poetry” and now teaches playwriting at Northwestern and is promoting his essay collection “These Are the Breaks.” Local poet John Kusak, celebrating an upcoming collection, will also appear. —T.E. Lyons

The changes in Louisville architecture are alive as we see new construction giving rise to new facades in downtown and NuLu. The time has come for the area to the south of the Belknap Campus to get a facelift as the industrial complex lays in disarray. To ensure the history of this area stays a part of our culture, a new exhibit at Chez Moi Gallery aims to preserve the memories. A grouping of six exhibitors bring reclaimed material, guerrilla film and stills, original ink on waxed linen drawings, vintage blueprints and metal sculpture from collected scraps. Special guest artists Lisa Oechsli and Tim Druck present photographic and mixed-media work of scenery that is no longer. The new face of a once bustling complex will soon be replaced, yet the work of so many to preserve the area will forever remain in the history books. —Allison Ray

Collaboration can be a terrifying idea, especially in a classroom, where it translates to “group project,” which translates to “I hate all of you and we’re going to fail.” Or, collaboration can be beautiful, when two or more great minds work together, bringing the best out of one another to produce a positively brilliant work of art. With Jeff and Hunter a mere three weeks away from the deadline for a musical theater festival, which is it going to be? In Tony Award-nominated “[title of show],” two struggling writers scramble to write a musical about writing a musical, trying to make their dreams a reality. This is the first show by Sock Drawer Productions — a brand new local theater company led by Cathy J. Butler-Weathersby, who believes “creativity should never be hidden in a drawer.” —Jane Mattingly

Some of the best visual art in town these days is being done at the studio/gallery StudioWorks, a nonprofit whose mission is “to help adults with developmental disabilities experience a sense of belonging in our community.” Chimel Ford, 22, is an artist with autism and has already earned his first solo show. Ford’s show is a display of works that explore many of the pop cultural and commercially plentiful objects that litter our cities, boldly painted with bright colors that simultaneously satirize and pay homage to modern times. Ford is also raising money for his supplies through the Fund for the Arts’ “Power 2 Give” fundraiser, for which, StudioWorks site coordinator Rebecca Crutcher says, “The money raised will also help other adult artists with developmental disabilities in our program with presenting their work.” Go online to power2give.org/Kentucky to contribute. —Peter Berkowitz

‘Tools of the Trade: Fiber Art by Bette Levy’

The term “woman’s work” was once used to distinguish “real” art from the crafts that women did to maintain or beautify their home. Thanks to pioneering female artists and the feminist art movement, woman’s work now covers all of the visual arts. Bette Levy’s current exhibition expands on that topic. “‘Tools of the Trade’ examines and honors contrasting modes of production — hard physical labor and more sedentary handwork,” says Levy. “The unlikely pairing of old tools with crochet suggests interesting contrasts — hard metal versus soft fibers, men’s versus women’s work, outdoor versus indoor, active versus passive.” The opening reception is Friday from 6-8 p.m. There are many special events planned, including two gallery talks by Levy. See the website for details. —Jo Anne Triplett

Though this concert is not officially a showcase of American, vocal-heavy female artists, it might as well be. Those similarities aside, the four acts could not be more different in their approaches. Soft acoustic melodies and passionately sung poetry characterize the musical style of Toronto-native Clara Engel. Through the end of March, her “Draw Blood Tour” partner is Valerie Kuehne, a Brooklyn-based avant-garde musical storyteller whose singing methods are erratic but fun. Opening for Engel and Kuehne will be two Louisville acts: electronic/orchestral siren Dane Waters and the experimental a capella trio The Sandpaper Dolls. What better way to break down labels and expectations than a side-by-side viewing? The event will be hosted by another Louisville musician, Mateo Barnett. —Simon Isham

In a world where right-wing blowhards are telling you, “You’re not OK,” Comedy Caravan is stepping up to say, “You are OK.” This Tuesday brings the launch of “90 Minutes of Pride,” a monthly variety show that aims to celebrate the beauty and uniqueness within the human spirit. And some of the hottest acts in the region will be on hand telling jokes, singing and playing crowd games not just this week, but at every subsequent “90 Minutes of Pride” show from here on out. Come out and celebrate with host Jacob Mudd and the funniest people around. Lynn Nowak, Lyle James, Janelle Fitzpatrick, Brian Million and Lindsay Boling will serve to remind the world that a little bit different never means wrong. —Brent Owen

It’s Caveman’s first visit to Louisville — and the band’s first tour, really. The group is fairly new, having just released their first studio album, CoCo Beware, in September. Despite the neolithic connotations that the band’s name might suggest, the rookie record does not sound primitive in the least. It’s a noble indie pop array with teeny, colorful Coldplay breadcrumbs scattered throughout. And judging from the surge of positive audience response after every show on the Caveman tour, it sounds like the real magic takes place live on stage. The Brooklyn-based five-piece rock band has garnered a lot of attention at the shows it has opened for — White Rabbits, Cursive and Edward Sharpe and the Magnetic Zeros. For this particular show, they will share the night with Quilt, a Boston trio whose genteel, trancelike, experimental songs are just as patchwork as the musicians behind them. —Simon Isham

What a way to celebrate a milestone birthday. When Ellen Glasgow turned 75 years old, she traveled to the Grand Mesa National Forest in Colorado’s Rocky Mountains. And as an artist is wont to do, she made a bunch of new abstracted oil paintings and monotype prints. What a location for an artist interested in landscapes — the Grand Mesa area alone has more than 300 lakes. From the images created, it seems Glasgow took full advantage of the area. Glasgow is the owner/director of the Capital Gallery of Contemporary Art in Frankfort. It’s good to see her in our neck of the woods with works that can inspire the viewer in both technique and subject. —Jo Anne Triplett

Were you aware 95 percent of the world’s bourbon is produced in Kentucky? Yeah, yeah, that was easy. But did you know that the bourbon and distilling industries here employ more than 10,000 people? As Louisvillians, I believe we pay a decent amount of respect to the product that generates more than $125 million in state taxes every year. We drink it, think it, debate it and cherish it by the snifter-ful. Taking this respect one step further, the Kentucky Derby Museum has just opened its newest exhibit, “Urban Bourbon,” which pays tribute to the past, present and future of bourbon in Kentucky. The interactive gallery features a fully functional bar with just about every bourbon available — where else will you find a bar in a museum? — as well as displays of vintage bottles, advertisements, timelines, family trees of the top bourbon producers and much more. Respect. —Sara Havens