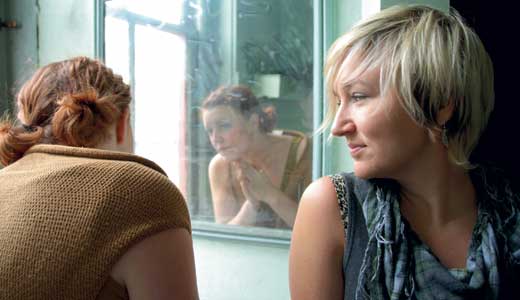 This play is not for the faint of heart. “In the Belly” graphically portrays the sad realities of prison life in solitary confinement, backed by stories from real inmates, reactions from their audiences, and modern literary voices. Says the cast: “Most Americans seem to relate to prison as an unmentionable aspect of our society, something we all fear and regret, but few of us want to even imagine.” In order to further this spirit of openness about the topic, the play will be followed by an in-depth discussion. And although the show is free, the Insurgent Theatre does suggest giving a donation. One-third of the money raised will go to Columbus-based RedBird Prison Abolition, a group that hopes to reform this country’s penal system of imprisonment in favor of more rehabilitative methods. —Simon Isham

Cloud Nothings is a basement beast — one of those bands formed primarily to kill the boredom of its creator. It was originally a solo effort, originating in Dylan Baldi’s parents’ den in Cleveland. When a concert promoter heard his lo-fi recordings, he invited what he thought was a band to perform a gig. Baldi jumped at the opportunity, scrambling to form a live band and dropping out of college in the process. Though its base of operations has since moved to Baldi’s very own basement, the project has remained mostly underground. Despite being low in celebrity, their talent has not gone unrecognized: They were the first band selected by Pitchfork in 2012 in the “Best New Music” category for their album Attack on Memory. Locals The Deloreans and Go Mordecai! share the bill. —Simon Isham

How many bands do you know that, in addition to a full tour schedule, manage to run an urban farm on the side? Not many. And yet the Philadelphia-based folk band Hoots and Hellmouth post about it semi-regularly on their blog, You and All of Us. Tonight will be the third time they have visited Louisville in the past year. Last time they were here, the band also played at Headliners, and they must have been appreciated, because the cover now starts at double the original price. They’ve also received an endorsement from WFPK, and so, too, have their stagemates, fellow folk acts Frontier Ruckus, a poetic group from Detroit with a wide instrumental range, and J. Irvin Dally, a young, well-traveled, experimental singer-songwriter from Los Angeles. —Simon Isham

MeX Theater at the Kentucky Center

Do they have drag shows at that temperamental bar you like? Can I borrow your tutu for the temperamental pride parade? I’m so glad we finally got to see Rachel Berry’s temperamental dads. In the 1950s, if you sneezed and it sounded too much like “I like other men,” you’d get beat up or sent to therapy to be “cured” of your gayness, so you’d have to speak in code. Pandora Productions’ latest offering, Jon Marans’ Drama Desk Award-winning piece “The Temperamentals,” tells the story of Harry Hay and Rudi Gernreich, a pair of lovers in the pre-Stonewall era who face the ruthless homosexual persecution of the time and establish the Mattachine Society, one of the first gay rights organizations in the United States. —Jane Mattingly

Best known locally for his song “Williamsburg Will Oldham Horror,” anti-folk singer Jeffrey Lewis faces the local hipsters solo here. Noted lyricists Ben Gibbard, Stephen Malkmus, Peter Stampfel and Jarvis Cocker are fans of this singer-songwriter and comic book artist, prolific and more literary than deranged, though albums like The Last Time I Did Acid I Went Insane and 12 Crass Songs (nothing but covers from the legendary British anarchist punks) would hint at a sensibility that doesn’t need encouragement to continue to be “weird.” Having just played SXSW with hero Daniel Johnston, Lewis should be happy and relaxed and welcome requests for favorites like “The Chelsea Hotel Oral Sex Song” and “Don’t Let the Record Label Take You Out to Lunch”. Plus, killer support from Wooden Wand and Tender Mercy. —Peter Berkowitz

‘Paws for the Planet’

Most dog owners are convinced their canine is cute, even if said dog is an unkempt, matted, snaggletooth mutt. Well, here’s your chance to find out whether your pup is in fact adorable, or if love really is blind: The nonprofit Whole Planet Foundation is hosting a dog photo contest, during which a photographer will snap pics of pets working it on the runway. Categories include cutest dog, best smile, sweetest senior and best in show, and winners — or rather, their owners — will receive Whole Foods gift cards and gift baskets. The cost for your dog to wag his tail for the camera is $10, and all participants will receive gift bags and a digital copy of their pup’s picture. Local no-kill animal shelters also will attend with adoptable dogs to promote their organizations. Money raised will go toward a micro-loan program that helps low-income women start their own businesses. —Sarah Kelley

It’s time to get your drawing on. “Draw On!” — winner of the 2010 “Leaders in Innovation Award” by the New England Museum Association — is the brainchild of the Aldrich Contemporary Art Museum in Ridgefield, Conn. “What’s impressive about (‘Draw On!’) is the scope — the number of organizations involved and individuals served as well as the fact that it has fostered broad community engagement — that has grown from year to year,” says one of the judges. Our local portion of “Draw On!” will be at the Louisville Visual Art Association. The more people participating, the merrier — it’s open to all ages and all skill levels. Creation, collaboration and fun are the buzzwords here. The finished drawing will be on display at LVAA. —Jo Anne Triplett

Two local ladies get the spotlight this month at Revelry Gallery: tattoo artist Lyndi Lou and stencil artist Melody Dennison. Lou’s “Plastic Daffodils” exhibit features whimsical paintings of animals in human roles. Lou, who works at Imperial Tattoos, says the name came from a story she read about a town that created plastic daffodils when its real ones died before tourist season. “The weather in the past couple years had changed so drastically that the daffodils were already dying by the time tourist season came around, so the town came together and planted thousands of plastic daffodils for the tourists,” she says. “It seemed pretty ridiculous (I mean that in a good way), and it made me think about family, what we do for those we love, and community.” —Sara Havens

Kri and Hettie, formerly known as The Sirens, are a folk duo who blend acoustic guitar, spoken word and harmonies. Their shows are inspirational, uplifting and powerful, and their music is equipped with a message that gives a voice to feminism, equality and girl power. In fact, if they were a Spice Girl, they’d be Patchouli Spice. The ladies also don’t take themselves too seriously and like to have a good time on stage. Kri and Hettie celebrate their newest album, Kri and Hettie Rhymes with Tree and Betty, on Saturday at Uncle Slayton’s, and the night will feature Huh Robots and Jacob Reisch as well. If you are searching for inspiration, look no further. —Sara Havens

With the approaching 100th anniversary of the start of World War I, and following a recent report that the last known WWI veteran had died at age 110, “Honoring Our History,” a traveling WWI exhibit, rolls into town Monday at Slugger Field. The exhibit is free and is housed in a customized, 18-wheel truck. In it, visitors will get a window to the war and its primitive tools and equipment, frightening trench warfare conditions, and haunting sights and sounds. From weapons and uniforms to video and even a walk-through trench that simulates the war environment, this may be as close as a person will ever get to experiencing WWI. The exhibit is designed to honor veterans and also raise funds and awareness. Donations on this stop will support the Kentucky Veterans Cemetery Central. —Kevin Gibson

With 12/12/12 barreling down on us, Iran’s “peaceful” nuclear program (that the country willfully restricts from any sort of inspection) may be the kind of thing that has you drawing up blueprints for a nice, new underground silo. Well, for a little perspective on how our leaders have engaged in negotiations with this crucial Middle Eastern country, listen to author Trita Parsi. At a luncheon hosted by the World Affairs Council, the U.S.-Iranian relations expert will discuss President Obama’s early years as president, the details behind the two nations’ dealings, and the factors involved in the current stalemate. The World Affairs Council is a nonprofit that promotes international affairs in Kentucky and Southern Indiana. Parsi has penned the book “Treacherous Alliance — The Secret Dealings of Iran, Israel and the United States.” He received U of L’s 2010 Grawemeyer Award for Ideas Improving World Order. —Anne Marshall

It’s time to stop complaining that we don’t have enough local visual art coverage. Add Catapult Art Mag to the list of publications and online sources. Available monthly in both print and digital download, Catapult is the dream of Thena Cartwright. “Being an artist myself, I know how hard it can be to be ‘seen,’” she says. “I personally explored many avenues of artistic expression and ended up becoming a graphic designer. I still found myself searching, looking, admiring other visual artists and their work. From artists that were very well known, to those just starting out. So it occurred to me that I needed to share what I saw. My only goal is to get as much exposure as possible for the artists that trust, encourage and support me.” —Jo Anne Triplett