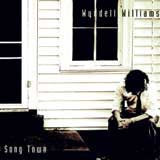 Song Town is the result of a wedding singer thinking he can make a solo record. Halfway through, I’m not sure he’s taking himself all that seriously, which is fine, as most listeners had given up on that idea a couple songs earlier. Williams, of the infinitely fun Jefferson Tarc Bus band, here breaks every rule of the cover band credo: Just because you’re good at remaking other people’s songs doesn’t mean you need to create your own. The light-country sounds (or is that early ’80s light rock? What’s the difference between 1991 Garth and 1983 Huey Lewis?) of the record are indistinguishable from so many discount-bin also-rans, and the seeming similarities of his “Iowa State” and Garth’s “Friends in Low Places” vocal melody are eyebrow-raising.