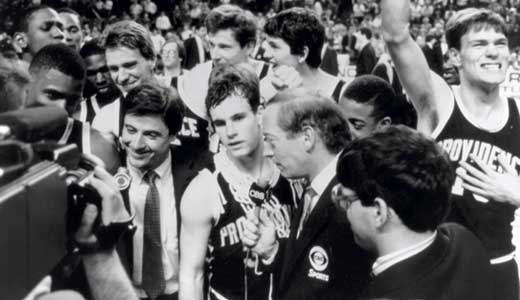 Rick Wanamaker is not a name that immediately resonates when contemplating the history of hoops in Louisville.

But he’s more than a footnote and comes to mind as the Dance — you know, the NCAA Men’s Basketball Tournament — returns for the first time since 1991 to this town that cares more about it than any other. (Don’t believe me? Check out the TV ratings.)

Hallowed Freedom Hall is now an afterthought, given the rise of the Yum! Center, the “World’s Most Spectacular Arena.” Yet it must be remembered that historic Freedom Hall hosted Final Fours, six of them to be exact, when the last weekend of the college basketball season was still known simply as the National Semi-Finals and Final. Four regionals and a couple of sub-regionals were also contested in that famous old gym.

Wanamaker, later decathlon champ at the 1971 Pan American Games, played pivot for Maury John’s feisty ’68-’69 Drake Bulldogs. In a simpler era before conference tourneys, they tied Louisville for the Missouri Valley Conference crown, then won the rubber match in a playoff to choose the league’s tourney rep. They won their way to a national semi match-up with UCLA and the presence known then as Lew Alcindor.

The zebras let Wanamaker beat on the nation’s most heralded player. (OK, yes, Alcindor went for 25 points and 21 boards, shooting 16 free throws. But, work with me here, I’m talking hoops mythos.) Spurred on by Wanamaker’s gritty play, Drake, down nine with 1:10 on the clock, cut the lead to one, then missed a jumper near the buzzer that would have been an upset to rock the world. The next night, the Bruins checked waterfall-coiffed Rick Mount and Purdue for one of its many crowns under John Wooden.

That was not the first NCAA Tournament championship contested in Louisville.

In 1958, the first year the finals were held in Freedom Hall, Adolph Rupp won his last title at UK without leaving the state, capturing the regional in Memorial Coliseum, then beating Temple by a digit, followed by Seattle for the crown.

Add the name of John Crigler to the list titled Guys My Uncle Told Me About. The unheralded Wildcat forward is credited with holding superstar Elgin Baylor to 9/32 shooting, and fouling him out with crafty moves to the bucket.

Freedom Hall hosted the finals again the following season. The quartet of schools included upstart U of L, eventually outmanned on its home court, Cincinnati with legend Oscar Robinson, West Virginia with The Logo, Jerry West, and the surprise champion, California.

The most seminal Final Four here was the ’63 affair. For the first time ever, the majority of starters in the title game were African-American, arguably a more important cultural paradigm shift than Texas Western’s heralded win over Kentucky three years later. Loyola’s Ramblers fought back from 15 down in the second half to catch two-time defending champion Cincinnati at the buzzer, then beat the Bearcats in overtime. (Earlier in the tourney, Loyola crushed Babe McCarthy’s Mississippi State, which had to sneak out of the state against governor’s orders to play the Ramblers, most of whom were African-American.)

Some of the regionals played in Louisville are also noteworthy.

In 1987, a brash young Rick Pitino coached his Providence Friars over higher seeded foes, Georgetown and Alabama, to earn a spot in the Final Four.

Few Louisville Cardinal fans of long standing will forget the heartbreak of the 1961 Mideast Regional semi-final loss to top-ranked Ohio State. Down one with seconds to play, Cardinal star John Turner missed the front end of a plus-1 that would have tied the game, then, after snaring the rebound, couldn’t can an easy jumper that would have sealed the upset.

One can only hope there are as many memorable moments.

Kentucky fans, shaking off a disappointing loss to Vanderbilt in the SEC Tournament final, are anxious to watch their beloved Cats begin their quest for another national crown in the geographically desirable confines of the Yum! Center.

Murray State is sure to have the crowd’s support against carpetbagger Colorado State. Big East representatives Marquette and UConn will be familiar with the gym from previous visits. Iowa State will be out to prove even a lesser Big 12 representative has something to say in the Dance.

Either Iona or Brigham Young has won its way to a spot Thursday against Buzz Williams’ Marquette Golden Eagles. And if Western Kentucky beats Mississippi Valley State in the opening round, the Hilltoppers will continue their tournament quest in their home state. Against a vaunted home state rival no less. (The results of opening round games in Dayton were not available at deadline.)

Those questions fans have been asking all year shall now be answered.

Will Kentucky’s youth catch up with it, given the pressure of the tournament? Is Marquis Teague a national championship point guard? Was the Wildcats’ sluggishness in the SEC Tournament a harbinger of trouble to come, or just a stumble before starting the quest that really matters?

Are Isaiah Canaan, Donte Poole and Murray State ready for prime time? The only one-loss team in the land was handed a No. 6 seed. Will that spur them on to quiet the skeptics?

How good is Marquette? Are they the squad that handled Wisconsin in Madison? Or the one that looked befuddled against Louisville in New York?

Can hobbled and ever cantankerous Jim Calhoun work his magic with his underperforming UConn Huskies?

NCAA Tournament, welcome home, welcome back to Louisville, the town that has always loved you the most.