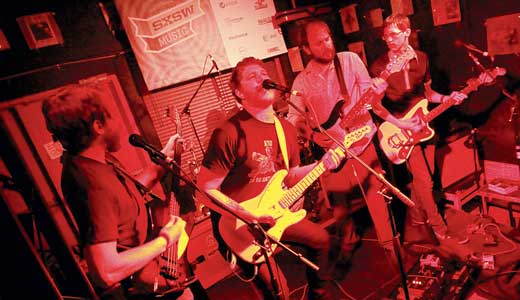 Chrissy Murderbot is on my plane.

En route to my first South by Southwest (SXSW), my eyes seek out notable musicians also making their way to the 25th annual music conference and festival in Austin, Texas. In this distorted world, a DJ like Mr. Murderbot counts as a celebrity (well, enough), though not compared to actual names your mom knows, like Bruce Springsteen, Norah Jones or Jay-Z. The conference, established to help new bands get discovered by the music industry and break out internationally, has also become a magnet for big fish looking to get a lot of buzz going quickly amongst 16,000 of the most dedicated music professionals in the game.

While Springsteen’s keynote address and live, full band performance dominated some of the conversation, new bands about to break through, like the Southern soul-rock band Alabama Shakes and the Austin-based next Hendrix, Gary Clark Jr., also earned attention. New Orleans legend Dr. John used the event as a platform for his Black Keys-produced comeback, and the Shins and Fiona Apple re-emerged, this time as influential veterans. At the same time, representatives from Taiwan to Tel Aviv hosted parties, and corporate sponsors shoved their products down the throats of the throngs, from Austin’s Dell Computers to the grotesque Doritos “Jacked Stage,” a tower-sized stage shaped like a vending machine, hosting hip-hoppers like the GZA and Snoop Dogg while encouraging punters to eat chips from planters designed to look like trees … but filled with Doritos.

For first-timers, the event can be overwhelming, as 2,000-plus acts play at more than 100 locations over four days. Those attempting it without good walking shoes and plenty of water soon learned that, like a 14-year-old on his sixth beer, there can, indeed, be too much of a good thing. One detail that makes this quasi-conference unique is that, for the most part, it’s open to the public — if not in some venues, then at least on the streets leading to those. So, true music lovers must often run through a gauntlet — a la “Escape from New York” or “The Hunger Games” — of blitzed sorority girls downtown wanting to see or be seen … just not so interested in the music.

The height of the contradictory nature of the event was found Friday night, as a tragically drunk 30-ish woman vomited violently all over her seat during a performance by the band The War On Drugs. The irony was likely lost on her at the moment.

It’s a veritable “Sophie’s Choice” of auditory pleasures. Louisville’s raucous rockers Natives played Wednesday night at the same time as Sharon Van Etten, Big K.R.I.T., Natural Child, Thee Oh Sees, and Dessa, any one of which would alone constitute a great night of music in Louisville. While many showcases were arranged sensibly by label, genre or region, some were thrown together randomly, leading to puzzled Latin dance music fans waiting for an acoustic Magnetic Fields to finish so that Colombia’s Bomba Estereo could begin. A long line kept LEO from getting to see Deafheaven’s symphonic metal set, but it could be heard clearly outside, proving to be an odd pairing with punk vets OFF!, who followed.

And there was certainly plenty to see, from the plentiful pedicab operators (some of whom dressed to distinguish themselves from the crowd, like the Mexican-American “Where’s Waldo?” and the oft-seen Wonder Woman-costumed gal) and the young team giving out free sushi on the street, to the ironic hipster tribute to Whitney Houston during Dale Earnhardt Jr. Jr.’s set, the girls holding signs offering “Free shrugs,” and the guy in a thick crowd of walkers overheard on his cell saying, “I took a paternity test, and it’s not mine — which is not what I expected and not the way I wanted it to go.” And LEO didn’t even get to see the riot that broke out at rapper A$AP Rocky’s 3 a.m. set Saturday night. As disco-punk Gossip singer Beth Ditto exclaimed about the teen idol turned evangelist, “I wish Kirk Cameron was here to see this.”