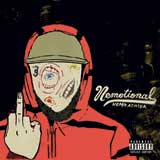 Lexington’s Nemo Achida has been releasing a steady stream of original music for some time now, and has recently captured the attention of producer 88 Keys (Black Star, Musiq Soulchild, Kanye and Jay-Z’s “No Church in the Wild”), who has picked him up for his own Locksmith Music label. Nemotional is his latest free release, presumably his last before we have to start paying for it. It’s a more laid-back set this time out, as Nemo finds his voice. His confidence is definitely up, and the production is solid, if a bit underwhelming. Considering all that Nemo has succeeded at this year, the album has less of the bombast and urgency of his previous output, settling in to what can best be called “blog rap” — essentially aural wallpaper you immediately forget. It’s certainly not a bad album; it merely is. Achida has proven time and again his abilities and talent for solid hip-hop; let’s just look at this one as a placeholder for the coming year’s output.