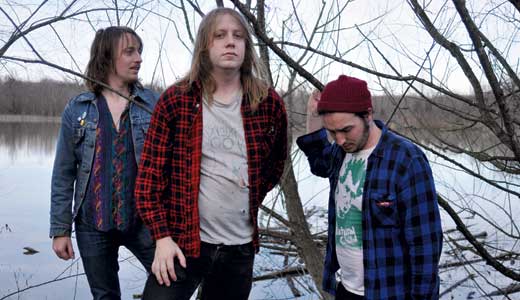 The trio Natural Child is a force, known as much for their onstage banter as their pure rock attack. For this interview, they chose to speak with LEO via speakerphone, which was entertaining, though a challenge to properly document. Because we were never quite sure who was saying what, we assigned a number to each after the fact for your reading ease and enjoyment.

LEO: I heard your new record —

NC1: We’re proud of it, we made it all ourselves. Yeah, we think it sounds great.

LEO: You made it all yourself, but there is a cover song, Tom T. Hall’s “That’s How I Got to Memphis.” Why did you include that?

NC1: We were just listenin’ to it a lot, and we thought it’d be cool to cover it.

NC2: Yeah. It’s a great song. We just dug it. We were just playin’ it at practice, I think, and just decided our version sounded really good to us. So we covered it.

LEO: It’s interesting, because it’s a country song about Memphis, and you’re a rock band in Nashville, a country town —

NC2: Yeah, a little bit. We dabble. We cover Willie Nelson and Kris Kristofferson — we do it all.

NC1: Twice, yeah. We’ve done all this touring but only been to Louisville twice.

NC1: That last place we played was awesome, though — the arcade bar, the one with all the arcade games.

LEO: Do you have any advice for young producers?

NC1: Just take your time to make it how you want it to sound. Just turn the knobs, push the dials and … yeah.

NC3: We try to make it sound like what we listen to.

NC3: Which is a bunch of really warm 8-tracks.

NC1: We record other bands in Nashville, too. We can make anybody sound that good (laughs).

LEO: (laughs) Is that your slogan?

NC1: Yeah, yeah: “We’ll record shit. We can make anybody sound that good.”

LEO: Before we go, do you want to say something to Louisville?

NC2: Our neighbors to the north …

NC1: We’re comin’ to git ya, our neighbors to the north! (laughs)

LEO: That sounds kind of threatening.

NC2: I didn’t really mean it like that. I meant it like, when you call your mom and you’re like, (threatening voice), “I’m comin’ to git ya …” (laughs)