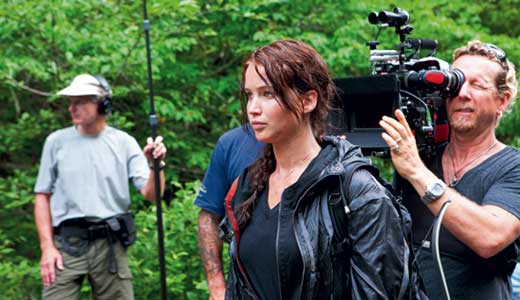 It was only four years ago that Jennifer Lawrence made her film debut in a little-seen indie called “Garden Party.” Since then, the Louisville native has collected an Oscar nomination for her plainspoken performance as an Ozarks teenager in “Winter’s Bone” and donned blue body paint — and little else — to play Mystique in “X-Men: First Class.”

And now comes her turn as Katniss Everdeen in “The Hunger Games,” one of the most anticipated movies of 2012. With the “Harry Potter” franchise completed and the “Twilight” series winding down, the $90 million “Hunger Games” — which debuted nationwide over the weekend — has created a feeding frenzy at the box office.

While such a speedy ascent up the A-list might unsettle some performers, Lawrence says it simply feels like she’s been handed a big promotion at work.

“When you get a promotion at your job, you don’t go, ‘God, that was too fast. Can I stay in the mailroom?’ No, you take it thankfully. So it was fast, but I’m grateful for it.

“And (the best thing is) I get to be Katniss. I get to, like, play this amazing, iconic character. When I drive by the posters, I laugh. But, every once in a while, I’ll get goose bumps. She’s just an incredible character to play.”

The saga of a televised death match, “The Hunger Games” is set in a post-apocalyptic America called Panem. Every year, the fascist government requires each district to send a teenage boy and girl to the Hunger Games, a cruel and exploitative event in which the Tributes (as the contestants are called) must fight each other until only one survivor remains.

When Primrose Everdeeen’s (Willow Shields) name is called as a Tribute, her older sister — 16-year-old Katniss (Lawrence) — volunteers in her place and becomes a player in the sacrificial sport.

The movie also stars Josh Hutcherson (from Union, Ky.) and Liam Hemsworth as the rivals for Katniss’ affections, Donald Sutherland as the dictator of Panem, Stanley Tucci as a TV talk show host, Lenny Kravitz as a stylist, Woody Harrelson as a former Hunger Games survivor, Wes Bentley as the Games’ creator, and Elizabeth Banks as Katniss’ PR handler.

Almost as soon as the books came out, Lawrence became a fan. Her affection for the futuristic tales made her “incredibly skeptical” about the movie version being overseen by Gary Ross, whose past movie credits include “Pleasantville” and “Seabiscuit.”

“I didn’t hear about the movie and go, ‘Oh, boy, I want to join in,’” she recalls. “I thought, ‘Great, they’re going to ruin another great book series with a movie.’

“But then I met with Gary and realized quickly that I could not have been more wrong. Everything that he had to say about the characters, the relationships, and about Suzanne’s work was incredible. I realized that (no one involved in the movie) was interested in being part of a watered-down version. I knew it was going to be an incredible film.”

Hundreds of actresses were considered for the central role of Katniss, but producer Nina Jacobson says Lawrence was head and shoulders above the rest. “In her audition, Jen stole the role. There was instant power, intensity and certainty in her performance. Some people can be fierce and others can be tender, but Jen is both.”

Lawrence — born and raised in east Louisville’s Indian Hills neighborhood — felt a kinship with the no-nonsense Katniss, a miner’s daughter who endures a hardscrabble existence in Panem’s poorest district.

“She was just surviving and feeding her family. And then she gets put in this position to not only save her family but to save her people. And she becomes this symbol for revolt and freedom and hope. And she goes for it. She realizes that she’s a symbol, and she fights. She’s like a futuristic Joan of Arc.”

Before Katniss begins the Games, she’s put through the paces by trainers. Lawrence underwent a similar regime in preparation for her role in the film.

“I had to do a lot of running and free-running, which is all about agility,” Lawrence says. “There was climbing, combat training, archery and yoga.”

Being in tip-top shape allowed Lawrence to pull off many of her own stunts. “I did as many stunts as I could,” she says. “The studio isn’t too big on having their lead actress, at the beginning of a franchise, do insane stunts. So I also had a wonderful stunt girl to fall out of trees and roll down mountains.”

Sometimes, Lawrence says, just hanging out on the North Carolina set required survival skills. “We had a lot of bears stopping by,” she reports. “We especially had lots of baby bears who don’t really know better. And we had a lot of wild turkeys.

“The wild turkeys were a hilarious problem. We had an assistant director whose job it was to run out and scare the turkeys. But then, after awhile, they weren’t so scared of him anymore.”

While the movie deals with some thought-provoking themes, Lawrence says the cast members spent a lot of time goofing off on the set. In particular, Lawrence and fellow bluegrass-born co-star Hutcherson became instant pals. They became such good friends, in fact, that they found it a bit difficult to generate sexual tension.

“The problem is that Josh and me, our chemistry is like a brother and a sister, like an annoying brother and sister,” says Lawrence, who, in real life, is reportedly dating “About a Boy” actor Nicholas Hoult.

“We’d be fighting over whose face is on the $10 bill. We’d have huge fights, screaming at each other, and then we’d be doing weird giggling, and playing like we’re cats. It wasn’t a chemistry you hope to find between two lovers.”

Lawrence didn’t grow up shooting a bow and arrow (as she does in “The Hunger Games”) or skinning squirrels (as she does in “Winter’s Bone”), but the actress says that spending time on her family’s farm just outside Louisville and horsing around with two older brothers helped get her ready for her most famous alter egos.

“For a long time, I’ve been saying that my Kentucky upbringing has nothing to do with my characters, but, I guess, riding horses and being outside all the time in the woods prepared me (for these movies),” she says. “My upbringing prepared me more than if I had been from New Jersey or something.”

Lawrence was a 14-year-old Kammerer Middle School student when she decided she wanted to be a professional actress and convinced her parents to take her to New York City to land an agent. After forgoing the traditional path that would have landed her at Ballard High School, Lawrence obtained her GED, and in 2007, she joined the cast of the TBS comedy “The Bill Engvall Show” for three seasons.

From the beginning, Lawrence says she was driven to be in front of the camera. “I remember my mom was laughing at me because I was, like, 14 and wearing my brand new Forever 21 heeled boots, and storming the sidewalks of New York as if I knew exactly where I was going.”

Since nabbing “The Hunger Games,” Lawrence has lost none of her ambition. She recently signed up for a number of high-profile films, including David O. Russell’s “The Silver Linings Playbook” with Bradley Cooper and Robert DeNiro, and “The House at the End of the Street” opposite Elisabeth Shue and Max Thieriot.

Also still to come are “The Hunger Games” sequels. Like Daniel Radcliffe, Robert Pattinson and Kristen Stewart before her, Lawrence is banking on not being typecast as her most famous character.

“(After the sequels are shot), I hope that I can do movies and not be Katniss anymore,” she says. “I hope people can watch my movies and not think, ‘Oh, look, Katniss is doing a drama.’

“I hope that when I’m doing ‘The Hunger Games’ movies that I can be the best Katniss I can be. Then I want to leave her behind and go off and do other good work.”