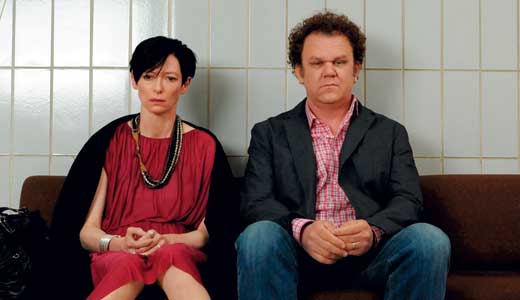 In addition to its “R” rating, a Surgeon General’s warning for expectant mothers would not be out of line for the new film “We Need to Talk About Kevin.” Watching the title character grow from conception to a manipulative, murderous teenager will likely fill some moms-to-be with dread, especially considering that the only thing Kevin’s parents seem to have done wrong is draw an unlucky card.

It’s unusual to root for the painful demise of a child, but this may very well be your reaction to Kevin. The detestable — and quite possibly, breakout — performance by Ezra Miller as this modern-day Damien is the reason for this. A teen who would not look out of place in a “Twilight” film, Miller can be frightening, despite pretty boy features and a frame that appears to weigh all of 100 pounds. He is cold, calculating and gives off infuriatingly smug glances that will make you want to put your fist through the movie screen.

Partial credit for this is due to the two actors who seamlessly play Kevin as a loathsome toddler and spiteful young boy, Rocky Duer and Jasper Newell. But, the biggest contributor to Miller’s effectiveness is Tilda Swinton, who stars opposite him as Kevin’s exasperated mother.

With little dialogue, Swinton — who was deservingly nominated for a Golden Globe as Eva — personifies the Sisyphean struggle that motherhood can present. Though she falls short of possessing a maternal golden touch and is herself a cold, complex figure, Eva is dedicated to a son who gives her nothing but reasons not to be. With her sunken expression and a hollowed out physique that appears on the verge of collapse, it is hard not to empathize with Eva as she plods on, absorbing the blowback left behind by Kevin’s evil deeds.

As Eva is repeatedly confronted by the victimized community that she is still, barely, a part of, we flash back and forth to — if not happier — less volatile times. Her husband Franklin (John C. Reilly) is a beaming, “aw shucks” kind of dad. Kevin, who won’t speak, play ball, use the potty or do math for his mother (despite knowing how), reciprocates Franklin’s kindness with an almost “Leave it to Beaver” wholesomeness and “gee, thanks, Pop!” felicitations. We suspect Kevin is doing this to play Franklin in some way. But, it’s worse than that. Kevin is engaged in the long game, and his father is a mere pawn. It’s Eva that Kevin, for whatever reason, hopes to slowly pick apart.

“We Need to Talk About Kevin” has unfairly been compared to “torture porn” by critics. Although it is not a feel-good film by any stretch and certainly is disturbing, Lynne Ramsay’s dizzily shot and masterfully edited feature is often mesmerizing. The opening moments crash down like a bucket of ice water during a peaceful nap. We arrive in the story disoriented, dropped into the worst moments of Eva’s fractured life and guided only by hallucinatory camera work from Seamus MacGarvey that seems to blur out of focus whenever we’ve learned just enough about Eva and her family. Similarly, the sutured together, non-linear narrative is cagey with its plot information. In this way, the film gives us an impressionistic view into Eva’s inability to unravel the enigma of a son who chooses to reject his mother.