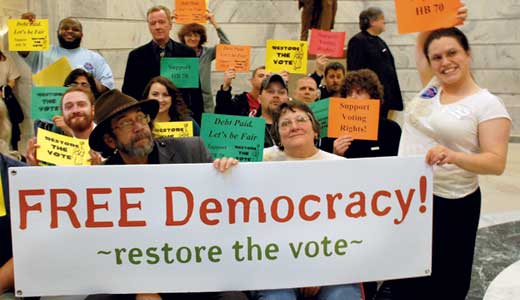 As activists shuffled around the Capitol Annex Building last week — part of Kentuckians for the Commonwealth’s lobby day for House Bill 70, a constitutional amendment to restore the voting rights of nonviolent felons — there appeared to be a presence among them that was missing in recent years: genuine optimism.

“It’s probably been the most hope we’ve ever had around this bill,” says George Eklund, an organizer for the Louisville-based Network Center for Community Change, which brought a dozen former felons to Frankfort to meet with legislators.

HB 70 once again passed the state House by an overwhelming and bipartisan 78 to 18 vote in late February, but this is typically the point where the bill dies in the Republican-controlled state Senate, without even receiving a committee hearing.

This year, however, the bill has been spared its typical destination in Republican Sen. Damon Thayer’s State and Local Government Committee. Instead, it has been sent to the Judiciary Committee of Sen. Tom Jensen, R-London, who was able to push through an aggressive penal reform bill last year that reduced jail sentences for drug offenders.

Though HB 70’s fate is still uncertain, its advocates are optimistic that this development, as well as new allies, will give Kentucky its best chance yet to cease being one of the few states in the country to not automatically restore the voting rights of nonviolent felons who have served out their sentence.

While our democracy claims a perverse mantel of “American exceptionalism” in this area — as the only democracy in the world not to universally guarantee the automatic restoration of such rights — Kentucky has an additional dubious distinction: the highest felony disenfranchisement rate for African-Americans in the country, almost three times the national average.

Quincy Sands, a chef and a volunteer with the African-American Male Empowerment Network, is one of the Louisvillians who came to Frankfort to meet with legislators and present them with signatures collected over the past few months. Convicted on a drug charge more than 15 years ago, he says that his defense of House Bill 70 is simply to tell his own personal story.

“What’s my pitch?” asks Sands. “You’re looking at it. I’m a guy who was a convicted felon, served my prison terms, and is now doing the right thing. Someone who works, goes to school, pays taxes, who’s doing what he’s supposed to do.

“But yet, I still don’t have my right to vote. So I’m here to show them that we can turn our lives around for the better.”

Louisvillian Treba Maxwell — convicted of a felony 15 years ago — says that in order for people to fully integrate back into society, they must be treated as equal citizens.

“Just because someone was in a bad situation at one time in life, that doesn’t mean they’re not trying to change their life,” Maxwell says. “But how can they do that if you won’t give them a chance?

“They’ve already served their time and paid their debt to society. It’s like they never even got out.”

The last study on felony disenfranchisement in Kentucky — conducted in 2006 — found that a staggering 23.7 percent of African-Americans were disqualified from voting, well above the 8.3 percent national average and 6 percent total of all Kentuckians.

Though felons can have their voting rights restored in Kentucky with a gubernatorial pardon, this involves a convoluted bureaucratic process that many are not even aware of, as fewer than 6,000 individuals have succeeded in doing so under Gov. Beshear.

Former felon Juan Gomez, of Lexington, says that Sen. Joey Pendleton, D-Hopkinsville, was frank with him when asked why Kentucky lags so far behind the rest of the country in this area.

“He told me that it’s racism, plain and simple.”

Republican opponents of the constitutional amendment typically argue that those who commit felonies have willfully surrendered such voting rights, and that the truly reformed still have the opportunity to plead their case for a pardon.

What you’ll rarely hear them admit (though restoration advocates suspect it is their true motive) is that this new demographic of voters will be heavily Democratic.

This fear seemed to permeate the campaign of Republican secretary of state candidate Bill Johnson last year, not just because he fiercely opposed measures like HB 70, but also because of bizarre conspiracy theories involving the defunct ACORN organization — the conservatives’ notorious boogeyman of non-white voting fraud.

Nevertheless, voters appeared to offer a strong rebuke to Johnson’s platform, as he suffered a blowout loss to Democrat Alison Lundergan Grimes, an unapologetic advocate of HB 70.

And though Johnson claimed roots in the Tea Party — a group not known for racial sensitivity — HB 70 advocates have been pleasantly surprised by the strong support of statewide Tea Party groups, as they see the legislation as an issue of protecting people’s basic rights from an overbearing government.

As Juan Gomez and four other Kentuckians for the Commonwealth activists huddled into the office of state Sen. Jared Carpenter, R-Berea, they were encouraged to hear Frankfort’s youngest senator express his openness to HB 70. Carpenter shared that he has several friends who made stupid mistakes when they were young, and their felony convictions continue to keep them from voting, despite the fact that they’ve since matured to become productive citizens.

But the most hopeful sign for HB 70 this year is that it landed in the Judiciary Committee headed by Sen. Jensen, who has made positive statements about the bill in the past and has a reputation for reaching across party lines for common sense reform.

At the rally for HB 70 in the Capitol Rotunda last Thursday, Lexington activist Tanya Fogle pointed out that Jensen’s penal reform legislation passed last year is currently freeing nonviolent drug offenders who won’t have the right to vote.

Even if Jensen supports giving HB 70 a hearing and vote in committee, the big question is whether Republican leadership — particularly Senate President David Williams, a past critic of the bill — puts enough pressure on him to squash it once again.

For now, Jensen is non-committal, while an estimated 200,000 former felons in Kentucky anxiously wait to see if 2012 is the year they are welcomed back into democracy.